"We had a really strong quarter," Newlands said, notwithstanding the stock's 6% selloff on Thursday. He said its core business was solid, with strong growth from Modelo, while Constellation reported its best quarterly margins ever.

So what went wrong? Investors were likely tripped up on a few accounting details, according to Newlands. Because of new accounting rules, Constellation had to show a $484 million equity loss on its Canopy Growth (CGC) holdings. However, keep in mind the company is still up more than $750 million on its stake, Newlands said.

Canopy Growth is the best capitalized cannabis company and current leader in cannabis sales, Newlands said. Plus, it has the regulatory and scientific knowledge to excel in the industry, he said. When cannabis becomes legal in the U.S., Canopy is already well-positioned to dominate that market, too, he noted.

Newlands said he is confident about Constellation's coming Corona seltzer product, launching in March 2020, and he added that tariffs are having little impact on Constellation's business. Let's check the bubbles in the charts and indicators.

In this daily bar chart of STZ, below, we can see a volatile rise from the January low. Prices recently gapped below the rising 50-day moving average line and are in a position to retest the rising 200-day line. The daily On-Balance-Volume (OBV) line was rising but now looks like it may turn lower. The trend-following Moving Average Convergence Divergence (MACD) oscillator is pointed down and close to a cross of the zero line and a sell signal.

In this weekly bar chart of STZ, below, we can see a mixed picture. Prices are still in an uptrend and above the rising 40-week moving average line, at least for now. Trading volume has been diminishing this year, which is not the definition of a strong market. Oddly, the On-Balance-Volume (OBV) line has been rising, which is supposed to tell us that buyers of STZ have been more aggressive. The MACD oscillator is close to turning lower and a take profits sell signal.

In this Point and Figure chart of STZ, below, we can see the recent decline with no gap and we can see a possible downside price target of $172. 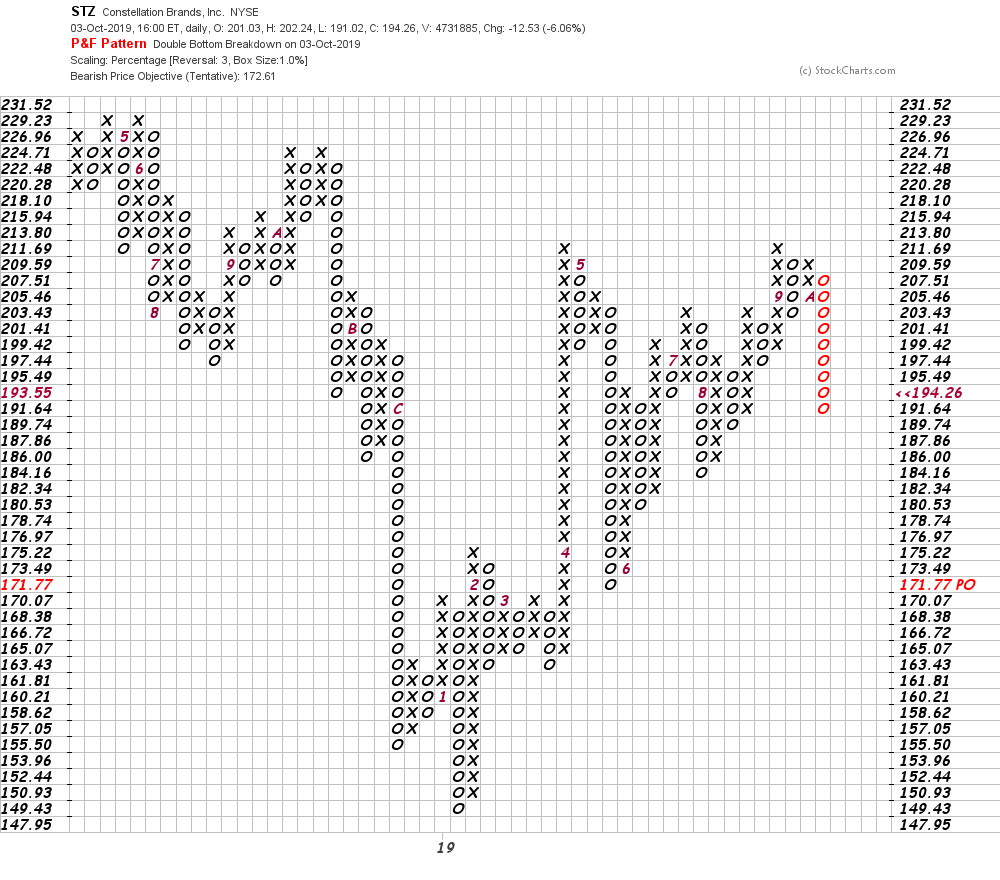 Bottom line strategy: STZ sometimes comes roaring back after a sharp break to the downside, but with a weak or weakening broad market we could see prices decline to their Point and Figure price target of $172.