Cramer said it looks like we're in a falling rate environment, and he has previously called Con Ed "the utility stock to own."

McAvoy also championed the dividend, noting that Con Ed has raised its dividend for 45 consecutive years. That's the longest stretch among S&P 500 utilities.

I champion charts and indicators so let's check them out this morning.

In the daily bar chart of ED, below, we can see that prices bottomed out in the October-January period before launching an uptrend. Prices are above the rising 50-day moving average line and above the bullish 200-day line.

The volume pattern is hard to read but the daily On-Balance-Volume (OBV) line has been rising the past year telling us that buyers of ED have been more aggressive. The trend-following Moving Average Convergence Divergence (MACD) oscillator has been above the zero line much of the past year as it is now.

In the weekly bar chart of ED, below, we can see a bullish picture. Prices made a large cup and handle-like base pattern the past two years with the breakout in June and the handle in July. Prices are up at new highs and above the rising 40-week moving average line.

The weekly OBV line is overall positive but a new high from this indicator would be nice. The MACD oscillator just crossed to the upside for a fresh buy signal.

In this Point and Figure chart of ED, below, we can see a potential upside price target of $116 being projected. 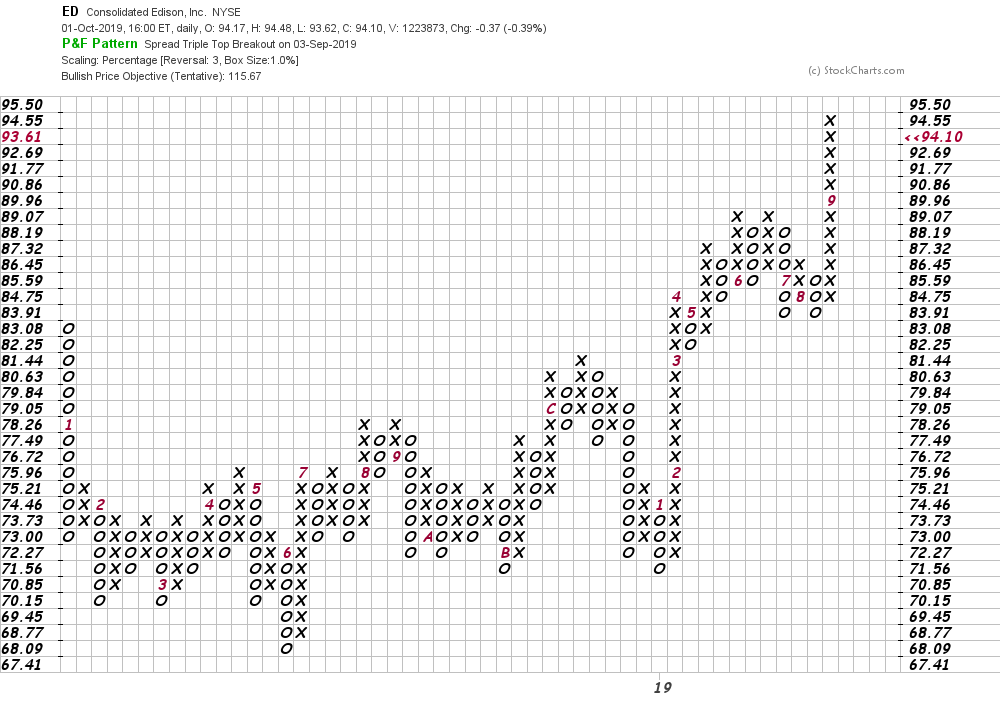 Bottom-line strategy: Investors and traders could go long ED at current levels, risking a close below $89 while looking for the $116 area on the upside.

Get an email alert each time I write an article for Real Money. Click the "+Follow" next to my byline to this article.
TAGS: Investing | Stocks | Technical Analysis | Utilities | Mad Money | Executive Interview