The Nasdaq QQQ fund  (QQQ) and the SOX -- Semiconductor Index -- got to support two days ago and they haven't broken those levels. There were fewer stocks making new lows two days ago, but that was not the case on Thursday, because Thursday they increased again.

But look at this chart. It is the same one I posted here after Tuesday's action. The blue lines have held. The thin black line above is resistance. But despite that Nasdaq was down all day until the last hour, and still the QQQs didn't break, is testament to what I said two days ago: We need a short-term rally to relieve the bearishness that had cropped up.

Even the semis, using the SOX, hasn't broken the uptrend line that was in place two days ago. It didn't even come close to that low on Thursday.

If there is any follow through to Thursday's late rally, I think the gloom will dissipate quickly. I see it anecdotally, the relief folks seemed to feel as the market went solidly green Thursday.

Now for the bad news. Breadth was unimpressive. Heck, upside volume on the New York Stock Exchange at 56% is truly crummy for a day the S&P tacked on 34 points. Nasdaq saw a mere 42% of its volume on the upside.

Nasdaq also saw the new lows increase, which had not been the case a few days ago. That will have to contract.

Then there is sentiment. I noted the anecdotal evidence. And there was my Twitter poll from last weekend where the majority were looking for a down week. But there is more. The good news is that the 10-day moving average of the equity put/call ratio is now at a multi-month high.

The bad news is the 21-day moving average of the put/call ratio for ETFs is low. Very low. 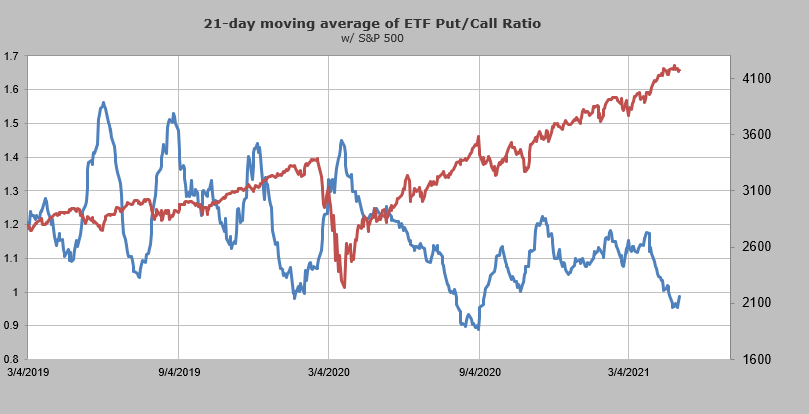 I see no reason to change my view on the market which is a short-term bounce, but the pullback is not yet done.

I want to end with a follow up from yesterday's discussion about the charts from the year 2000. The Dow Jones has been on a tear lately (probably why sentiment doesn't get terribly bearish) so take a look at the QQQs relative to the Dow from mid-1999 through mid-2002. The outperformance of the QQQs heading into the March high is something to behold. But now look at the underperformance of the QQQs for the ensuing two years.

If you look at today's market, it has mostly been in a tug of war for the last year. You had the big run up in June and the decline in February. But, overall, it has not seen either with a strong outperformance. Neither group is a star here, despite what it might feel like lately. That's likely why there is so much frustration out there.

Note: Meisler will not post her column until Wednesday, May 12; her next letter will appear May 11.