Sometimes it's difficult to know what to be more encouraged about: That we finally had a day when breadth was good, while the S&P 500 sat there, or that the banks finally found some love. Of course, I have been encouraged by both of these factors before, only to be disappointed each time. I look forward to the point when the hated banks get some love.

Today, rather than discuss the near term, I would like to take a big step back and look at a general overview. In the past few weeks, we have seen the precious metals soar. We have seen bond yields break to new lows. We have seen the dollar slide relentlessly. Midweek last week, I addressed these excesses by discussing the sentiment on them and how it was likely it was to see a change in these trends that had become so persistent in July.

The yield on the 10-year will reach some resistance as it heads toward .57% and it gets quite heavy at or near .60%. This is a very short-term chart, so you can see that crossing .57 changes that July trend.

I highlighted the potential double-bottom in the Dollar Index and still think it is possible. Over 94 in the DXY could send some shorts scrambling. Even if the buck comes back down, I think the decline is getting late; the boat is simply too loaded to one side now.

On gold and silver, I think they are stretched and overdone, as well and they both need pullbacks or shakeouts or some sideways digestion. How does all of this relate to stocks?

First of all, this trend exacerbated in July, so if it spends the next few weeks reversing, then the July trend in stocks should also have a knock on effect. Two weeks ago, the Insider Selling Ratio ticked up to its highest since December. It rarely, if ever, lines up directly with a high or low in the market but it doesn't mean it should be ignored or forgotten.

I haven't discussed the Citi Panic/Euphoria Model in a while, because it has remained so steadfastly euphoric. Why should it matter now? Well, I think the Investors Intelligence bulls, which have hovered in the upper 50s for weeks, could slip over 60% this week. Why? Because of last week's rise of the laggards like the banks, the Russell 2000, the down-and-outers. That could be what tips folks over the line and for me once the Investors Intelligence readings are over 60% bulls, we have entered the red zone. 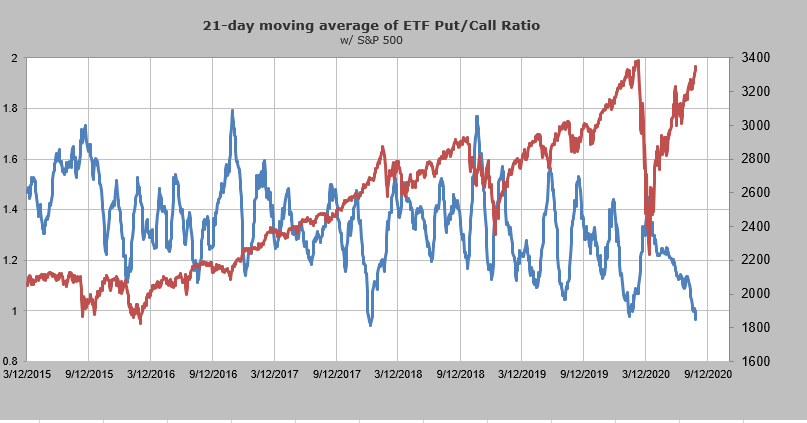 There was another minor shift last week, as well. For the first time since February the put/call ratio for the VIX hasn't been over 1.0 for eight straight days. A string that long is no big deal -- we have often gone months without a reading over 1.0. But it is a change from what we've seen, since the March rout. The 21 day moving average of the VIX's put/call ratio is now falling hard. A few more days of low readings and it will make a lower low. That prior low you see came a handful of days before the high in June in the S&P. Also, keep in mind the Daily Sentiment Index (DSI) for the Volatility Index is now 10. Single digit readings are rare and useful: The underlying instrument tends to rally from single digit readings. 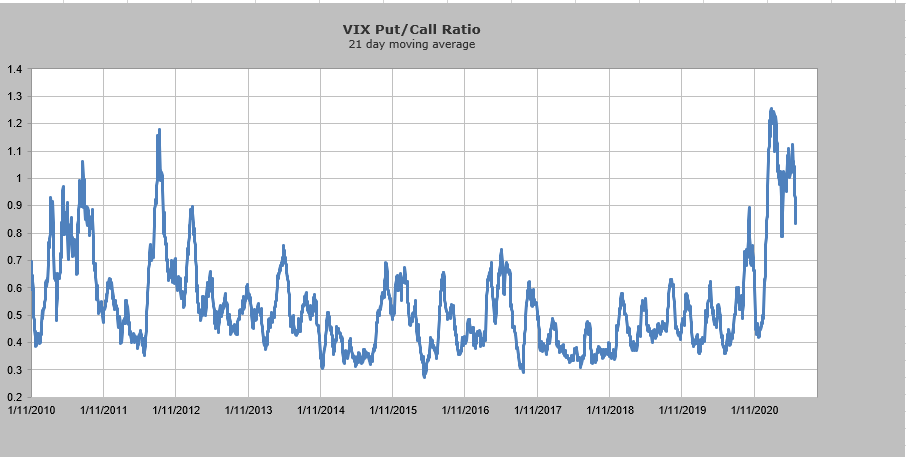 Finally there is my non-scientific weekend Twitter Poll. It may be non-scientific but it has been a good guide for us. While I have missed a few weeks, I have been running these since April. Each week I ask what folks think the direction of the next 100 points in the S&P is.

In mid May (green arrow) the spread was widest at -28 with 36% looking for upside and 64% looking for downside. In late June, after a 7% decline in the S&P (green arrow) they were once again skewed to the downside at 39% up and 61% down which gave us a net of negative 24. That red arrow represents the most bullish folks had gotten at 53% up and 47% down for a net of positive 7. My arrow is a bit off, because the poll was taken on the weekend and we did rally for two more days before coming back down.

This week's poll found folks to be the most bullish yet with 57% looking for upside and 43% downside. That give us a net of positive 14 points. This is another reason I think the Investors Intelligence bulls might tip themselves over 60% this week. I cannot be the only one who is encouraged by that move in those banks, can I?!

In the short term, I don't have a strong view as to whether or not we have a few more days of upside or not, but when we step back and I see all of these potential changes and shifting I think August will not be nearly as calm as July.

Get an email alert each time I write an article for Real Money. Click the "+Follow" next to my byline to this article.
TAGS: Investing | Stocks | Technical Analysis | Metals & Mining |