There seems to be a lot of chatter these days where folks compare the current decline in equities to the 2015-2016 decline. I think that is recency bias, where you look to what just happened and expect it to happen again. But I decided to go back and see if there was a good comparison then versus now.

But you see, that entire test and retest sequence did not begin with August 2015's waterfall decline. Rather, it began a year prior, when the market rolled over in the summer of 2014 and gave us a panic low in October 2014. Step back and see that the 18-month period was a giant sideways with many swings, with the S&P 500 Index in a 300-point range. August and October 2015 did not take out the October 2014 low, but the early 2016 swan dives came right down to it.

So if we're going to do an apples-to-apples comparison you'd have to say the late January/early February swoon this year was more like October 2014 and this could be like August/October 2015. Time-wise it makes sense, too, because the 2014-2015 period was 10 months apart and we are currently about nine months removed from the early 2018 lows.

I think the shape of the top is vastly different now versus then, but you must admit the October 2014 plunge and the subsequent rebound to a higher high that couldn't sustain itself looks similar, as does the August 2015 plunge, the crummy rebound and renewed decline into October 2015 (blue line), to today's early 2018 plunge, rebound and revisit (green line).

This is a long way of saying if you are going to compare this time frame to that one, then we are more likely in the fall of 2015, not the winter of 2016.

I thought of this the other day because my mother called to tell me that the guy on the radio says the FANG stocks are in trouble (which therefore makes the market in trouble). Naturally I brought up a chart of Amazon.com Inc. (AMZN) from back then.

The first thing I noticed was how awful the stock looked heading into the 2016 low. It had declined just over 30% in six weeks. I can remember the hysteria over emerging markets, oil and high yield, but I could not recall any FANG hysteria. (Someone reminded me FANG wasn't a "thing" back then).

Now take a look at AMZN for the last 18 months. It is down 25% from the high and the high was almost three months ago, yet hysteria over FANG is deafening. The charts are somewhat similar.

Apple Inc. (AAPL) , which everyone seems to think controls the market these days, is even more interesting. It was down just over 25% by the time early 2016 rolled around, but my gosh, it made its high a year before! If that is not an ugly chart, I don't know what is. And I don't remember anyone saying that the market was awful in 2015 because Apple wasn't participating.

Apple is currently down just shy of 25% and hasn't even broken the uptrend line yet. But the guy on the radio says these stocks are in trouble. I wonder what he thought in early 2016?

But if you still think the current environment is more like the winter of 2016, let me show you something else. Back then breadth topped in the spring of 2015. The S&P didn't roll over until August. But here again, wouldn't the current lows look more similar to August and October 2015, where there were twin lows in breadth -- and higher lows versus October 2014 -- than the winter lows of 2016, where breadth made a lower low?

I do not know if we are at the autumn lows of 2015 or the winter lows of 2016 or if this is just a way station before we go ever lower. I don't think this is the winter low of 2016. But I do know that sentiment is sour and we're oversold. I also know that breadth had its best day Wednesday since Nov. 7, the day after the midterm election. So sure, the action was sloppy and terrible heading into the close and maybe that's why the American Association of Individual Investors' weekly survey shows bears at 47.1%. They chimed in at 48.7% in the winter of 2016. 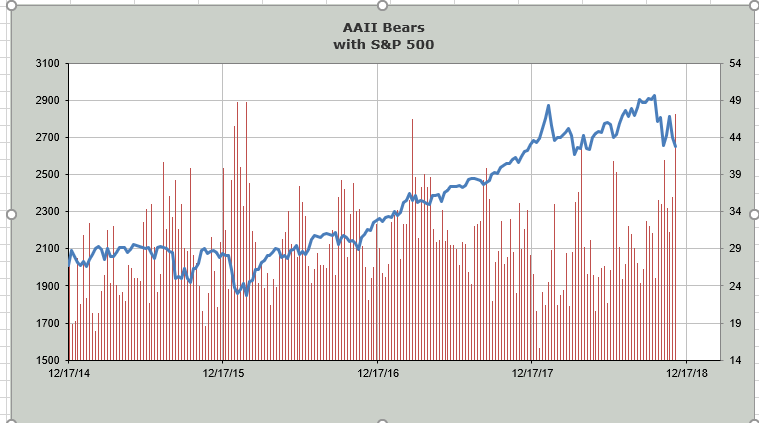 Get an email alert each time I write an article for Real Money. Click the "+Follow" next to my byline to this article.
TAGS: Indexes | Investing | Stocks | Technical Analysis