For the Executive Decision segment of "Mad Money" Thursday, Jim Cramer spoke with Tim Boyle, president and CEO of Columbia Sportswear  (COLM) , the outdoor apparel maker that on Wednesday posted third-quarter earnings that beat the consensus estimate by 20 cents a share yet saw its shares lose ground in trading on Thursday.

Boyle said the company's Sorel brand continues to see strong sales, up 27% for the quarter. Sorel is not a new brand, he noted; it began with men's work boots and was popular with snowboarders in the 1990s. Today, Sorel has reinvented itself as a women's footwear brand and Boyle said the name has a lot of growth still ahead of it. Boyle said unlike most branded apparel, footwear is a high-ticket item that helps bolster sales.

Boyle was also bullish on Columbia's partnership with Walt Disney Co. (DIS)  which is a holding of Cramer's Action Alerts PLUS charitable trust.

Turning to China, Boyle said China remains Columbia's largest geographic opportunity and that it has been selling into that country for over 20 years. On the manufacturing side, Columbia has been moving out of China for several years, he said, because the economics and quality are better elsewhere in the world. For brands such as Sorel, however, it will take time before alternate manufacturing can be found.

Let's check out the charts and indicators to see if they fit the story.

In this daily Japanese candlestick chart of COLM, below, we can see that prices have been holding support found in the $92-$90 area since May. Buyers showed up each time price declined to that area. On Thursday prices broke below that zone, but by the close they were back in that area. Follow-through buying and a higher close here on Friday would help the longs to safely exhale. Many traders will quickly sell a stock that has broken to a new low, but to me the key is the close as sometimes buyers step away (maybe the algos are stuck on a train somewhere) and there is a temporary break of support. It is just a way of reminding you that technical analysis is not perfect.

The price decline has not hurt the rising 200-day moving average line, but the 50-day line is beginning to show a bearish slope. The On-Balance-Volume (OBV) line has declined from the middle of October, and that is not a good sign as it shows sellers have been more aggressive. The Moving Average Convergence Divergence (MACD) oscillator just slipped below the zero line for a sell signal.

In this weekly candlestick chart of COLM, below, we can see that the $90-$80 area should be good support. The lower shadow on the weekly candle pattern is all below $90, suggesting that traders have been buyers below $90. Price strength here at week's end would go a long way to improving the picture. The weekly OBV line is pointed down and the MACD oscillator is bearish, and that should not be ignored.

In this Point and Figure chart of COLM, below, we can see a possible downside price target of $74, but also that prices are down in what should be a support zone. 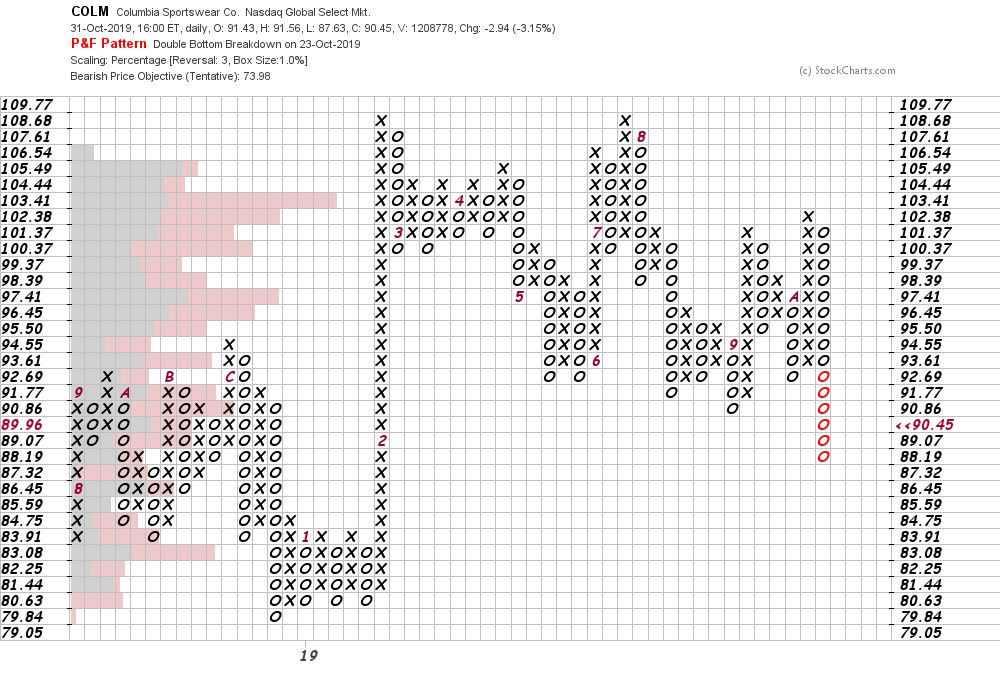 Bottom line strategy: There is no denying that there are lots of negative signals on these charts, but I am impressed for now by how prices came back from the lows on Thursday. A lot is resting on how prices perform on Friday. Keep a buy ticket and a sell ticket ready (I'm dating myself).

Get an email alert each time I write an article for Real Money. Click the "+Follow" next to my byline to this article.
TAGS: Earnings | Investing | Stocks | Technical Analysis | Apparel | Consumer | Retail | Executive Interview | Real Money

This Correction Is More Complicated Than a Covid Variant

The mood is growing grim, and it is a good time to contemplate something I often say during times like these.