On Tuesday afternoon, Coinbase Global (COIN) reported its second-quarter financial performance. The numbers are not just good. They are staggering. The future, however, for the entire industry remains unclear, even as certain high-profile cryptocurrencies such as Bitcoin and Ethereum soar to and then appear to stabilize at elevated levels.

For the period, Coinbase posted earnings per share of $6.42 versus expectation of roughly $2.25. Of the 13 analysts covering this stock, the high end of the range of EPS expectations was just $3.43. Revenue generation landed at $2.23 billion, which was also a sizable beat and good enough for year-over-year growth of 1,099%. Second-quarter net income hit $1.606 billion while adjusted EBITDA was $1.15 billion, up from $1.117 billion in the first quarter and soaring from just $61 million in the year-ago period.

Monthly transacting users (MTUs) increased to 8.8 million from 6.1 million over three months while trading volume in U.S dollar terms hit $462 billion, up from $335 billion for the first quarter. However, due to the fluctuating value of cryptocurrencies, assets held on the platform decreased to $180 billion at quarter's end from $223 billion the prior period. Interestingly, though retail investors drive most of the revenue, they do not account for anything close to most of the trading volume. Of that $462 billion in trading volume, Institutions accounted for $317 billion, with retail investors just $145 billion.

Ethereum (26%) overtook Bitcoin (24%) as the most heavily traded cryptocurrency on the platform, while all other coins or tokens combined totaled 50% in aggregate.

For the full year, Coinbase has outlined a high, mid, and low forecast that spreads average MTUs from as few as 5.5 million to as many as 8 million. In short, Coinbase has absolutely no idea what to expect over the rest of the year and hit readers with this high, mid, and low batch of scenarios that any corporation in any industry could simply publish in order to avoid looking foolish.

Not only will Congress look to tax cryptocurrency transactions as a means toward providing up to $28 billion over a decade that will be put toward financing the $1 trillion infrastructure package currently on its way to the House, but there are those in government looking to regulate, or make safer for investors, the still under-regulated cryptocurrency industry

Securities and Exchange Commission Chairman Gary Gensler wrote a letter to Sen. Elizabeth Warren in response to her July 7 inquiry. Sen. Warren released that letter, dated last Thursday, here on Wednesday morning. "Right now, I believe investors using these platforms are not adequately protected." Gensler flatly states. Readers will recall that last week Gensler referred to the asset class as "rife with fraud, scams and abuse." Gensler at that time asked Congress for the authority to keep cryptocurrency transactions and platforms from falling through the regulatory cracks.

Coinbase will rise and fall with market prices for cryptocurrencies as investor interest rises and falls. Currently, prices are rising, despite the increased likelihood of coming regulation and tax enforcement. This may or may not be due to financial management firms looking to create and invest in new products based on this still not widely understood vehicle.

If I were a braver man or had not been wrong about Bitcoin and the like to this point, I would be looking to short COIN on this morning's bounce. That said, I think using all our tools -- in this case, the options market-- is how I would go about placing a bearish bet on the name. Shorting a highly valued and still-growing company's stock is as much a gamble as investing on the long side in such a name, perhaps more of a gamble as a short seller's potential losses are infinite. On the long side, one can only lose their principal. 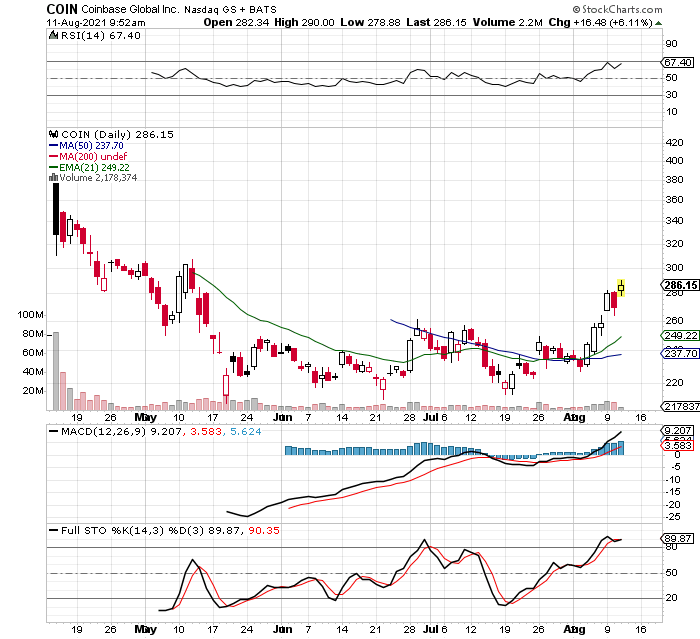 Both Relative Strength and the Full Stochastic Oscillator suggest that COIN is technically overbought. The daily moving average convergence divergence (MACD) looks extended as well. On the positive side, the stock has hit support close to $210 and stood firm on each and every attempt. Obviously that is where portfolio managers who are long this name are willing to defend their positions.

Note 1: Implied valuations are used in modeling. These options trade in these markets, and execution will have to be worked in order to get fair pricing.

Note 2: The trader in this example is placing a bearish bet on COIN, willingly limiting profit to $14.15 ($25 minus $10.85) but also capping the risk at the $10.85 outlay.
Get an email alert each time I write an article for Real Money. Click the "+Follow" next to my byline to this article.
TAGS: Regulation | Bitcoin | Earnings | Investing | Options | Politics | Stocks | Real Money | Cryptocurrency