Multiple new closing highs were registered on the charts of the major equity indices Thursday, leaving all but one in their near-term technical uptrends. Meanwhile, the data are mixed, with yellow flags coming from market sentiment readings.

So, where does that leave us?

All remain in near-term uptrends except for the Russell 2000 staying neutral. 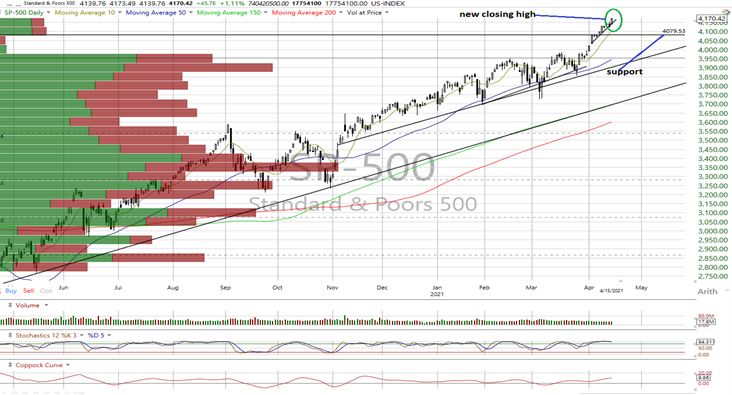 Cumulative breadth is positive on the All Exchange and NYSE while the Nasdaq's is still in a near term downtrend.

Stochastic levels remain overbought but have yet to generate any cautionary bearish crossover signals.

As such, we remain of the opinion that the near-term trends should continue to be respected until proven otherwise.

This week's Investors Intelligence Bear/Bull Ratio (contrary indicator) was unchanged at a bearish 17.5/54.4 with the AAII a bearish 21.4/52.2 as bullish sentiment increased.

Of note, the Open Insider Buy/Sell Ratio is still bearish at 15.9 as insiders remain largely on the sell side. We repeat our experience that this data point tends to be more effective in marking market lows versus tops.

Valuation still appears extended with the forward 12-month consensus earnings estimate for the S&P 500 from Bloomberg lifting to $182.60 per share. This leaves the S&P's forward P/E multiple at 22.8x, while the "rule of 20" finds fair value at 18.5x. We reiterate the valuation spread has been consistently wide over the past several months while the forward estimates have risen rather consistently.

For reasons stated above, we are maintaining our near-term "neutral/positive" macro-outlook for equities. Also, several companies have recently been raising their quarterly revenue estimates.