The core of the reopening play. Well one of the cores anyway. The Materials are reporting, and sales growth has been outstanding.

Last week, Alcoa (AA) beat on the top and bottom lines, setting a record for net income and laying down a positive outlook for the current quarter. Friday, we'll hear from Southern Copper (SCCO) . But today is Thursday. Thursday has already been a big day for the group.

This morning, we have already seen Action Alerts PLUS holding Nucor (NUE) , a company that some see as best in the steel class, report a double beat for the second quarter, which included 103% sales growth, while predicting a record third quarter.

Freeport-McMoRan (FCX) posted a bottom line beat, a top-line miss that still produced revenue growth of 88%, while increasing its outlook for copper production.

Then there is Dow Inc. (DOW) -- beats for both profitability and sales. The sales number there (+66%) beat Wall Street estimnates by more than a cool $1.1 billion.

I am already in AA (up small), FCX (down small) and SCCO (up really, really small), but one that I have been thinking about, but not in, is Cleveland-Cliffs (CLF) . Cleveland-Cliffs reported Thursday morning, too.

For the second quarter, Cleveland-Cliffs posted adjusted earnings of $1.46 per share, which missed by a nickel. GAAP EPS landed at $1.33. That obviously missed by more.

Revenue generation was another story, beating the Wall Street consensus with a print slightly above $5 billion, which was good for annual growth of 358%, give or take. Both that $5 billion and the net income of $795 million it produced were quarterly records for the company.

As far as steelmaking is concerned, which is the primary business here, Cleveland-Cliffs produced 4.205 million net tons, up from 614,000 net tons for the year-ago period. Product consisted of 33% hot-rolled, 30% coated, 17% cold-rolled, 6% plated, 4% stainless, and 10% other. On the demand side, 40% of product went to distributors and converters, 27% to the infrastructure and manufacturing market, 23% to automotive, and 10% to other steel producers.

Looking at the balance sheet, over the past six months, cash is slower, but accounts receivable are almost double, more than making up for the difference, leaving current assets 21% higher year to date. Total assets are also higher despite the fact that the company reduced the entry for "goodwill," which we like to see. On the liability side, almost nothing has changed. Current liabilities are dwarfed by current assets.

There has been no "material" change to the long-term debt picture, though the number is uncomfortably large relative to equity. That's probably why the shares trade at just 3 times forward-looking earnings. Non-current pension liabilities are lower. Total liabilities away from equity are a touch lower than they were six months back.

The balance sheet is obviously imbalanced due to the long-term debt load, but has not worsened. Cleveland-Cliffs can access roughly $2.1 billion in liquidity if need be.

For the current quarter, CLF expects to see adjusted EBITDA of approximately $1.8 billion, and free cash flow generation of $1.4 billion. Chairman, President and CEO Lourenco Goncalves said, "Steel demand remains excellent and, as we continue to negotiate our contract business with several clients in different sectors, it is progressively translating into substantially higher contract prices later this year,and into 2022. Ultimately, we are set for a monumental debt reduction during the back half of this year, and the achievement of zero net debt in 2022."

All I can say to that is "sign me up." That would be some accomplishment. 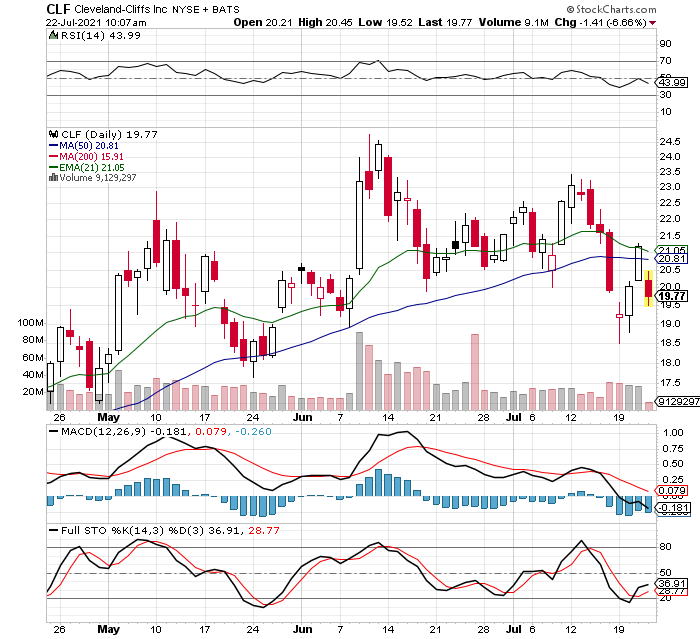 The stock is down 6% on Thursday morning. One can readily see a mild downtrend in place since mid-June. That's with the group.

Now, take a look at this.

Going back to the pandemic lows, there have been two distinctly different periods of acceleration, the first obviously more aggressive than the second, separated by a December 2020 spike. The entirety of the 18-month move allows, in my opinion, for worst-case Fibonacci support in the $16.50 area, and or a potential target price should demand stay hot and should the company maintain the pricing power that it expects to, of $26.

Note 1: Should the shares rise beyond $26 by expiration, the trader will be called away at $26 for net profit of 44%.

Note 2: I like this trade. I think I'm going to put it on, or something like it, once this piece is published and you have the opportunity to act ahead of me.

(NUE is a holdings in Jim Cramer's Action Alerts PLUS member club. Want to be alerted before Jim Cramer buys or sells this stock? Learn more now.)

Get an email alert each time I write an article for Real Money. Click the "+Follow" next to my byline to this article.
TAGS: Earnings | Investing | Markets | Stocks | Trading | Value Investing | Materials | U.S. Equity