Citigroup's (C) hint of stabilization in both equity and bond markets has sent its entire sector skyward.

Shares of the big bank leapt nearly 4% on the day's trading, closing at $50.93, and marking a significant jump from the plunge on the pre-market print that left shares down over 2%.

"We have seen some improvement in trading conditions with volatility moderating and both equity prices and yields showing signs of stabilization early in January," Citi CFO John Gerspach told analysts on the company's earnings call. Though he noted it is too early to make a definitive call on the road ahead, the confident comments helped the stock sustain its surge on Monday.

However, that surge has been more than stock specific, as the comments on normalization has buoyed Financial Services Sector ETF (XLF) and has buoyed other banking stocks like JPMorgan (JPM) , Wells Fargo (WFC) , Goldman Sachs (GS) , and Bank of America (BAC) ahead of their own earnings releases.

The idea of both equity and bond stabilization, after a December that downed many financials dependent on bond trading and lending, is certainly helping the bullish case for the banking sector's big week.

To be sure, Mayo leaves out Goldman Sachs, as the boogeyman of the 1MDB scandal may be the one scary specter awaiting banking sector bettors.

If the environment does indeed brighten and there is no boogeyman in sight for the rest, there might be few better times to buy the stocks at still relatively depressed levels and ahead of what could be better than expected earnings releases.

The beat on profitability even amid a tough environment for Citi, which has been a traditionally laggard stock for the sector, suggests that other banks may have done better than expected also. Further, as the first quarter is traditionally the best quarter for banking stocks, buying in after a down December could be advisable.

"In a tough quarter, Citi's ROE is higher than what the stock is pricing in," Morgan Stanley analyst Betsy Graseck said. "We see a buying opportunity."

She set a 2019 price target at $76 per share, suggesting much more room to run for the hot stock and added that relaxed CCAR restrictions and strong consumer backdrop are strong macro indicators of continued strong performance.

The run for Citi could be a boon for ETF investors as well.

Citi occupies about a 5% weight in the S&P Financial Services ETF, only behind Wells Fargo, JPMorgan, and Bank of America for banks. A bounce in the stock that is bolstering its peers is clearly a positive for those diversified across the holdings.

One can clearly see this trend from Citi's trajectory against the XLF in recent years. 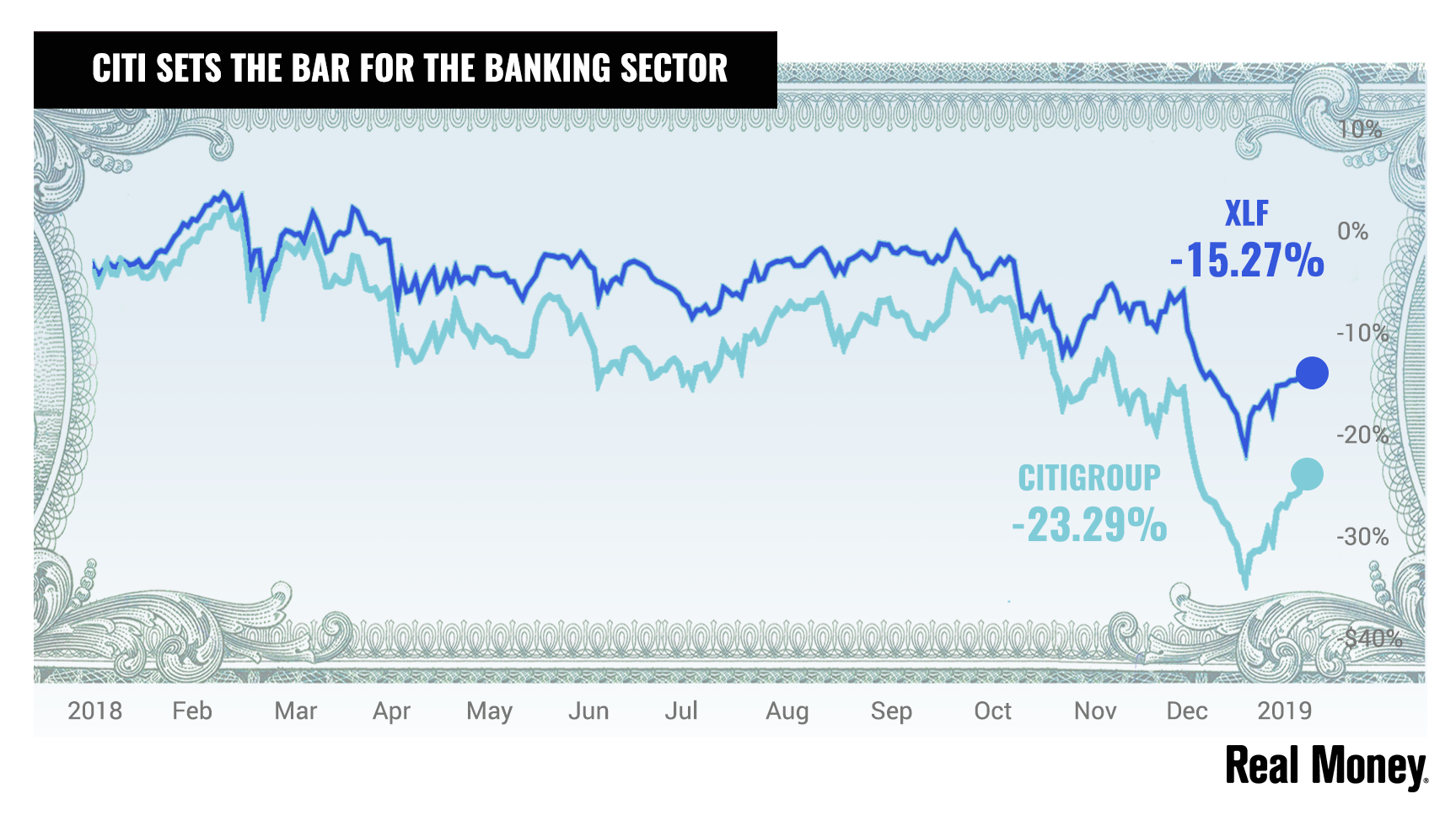 Although the stock has trailed its index, its moves have largely coincided with its parent ETF, arguably setting the (low) bar for the banking sector.

As the market awaits bigger bank earnings releases this week, many investors may be trying out a new type of bird box challenge, where they put on a blindfold and bet on the big banks.

JPMorgan and Wells Fargo will both report earnings on Tuesday morning before market open.

Get an email alert each time I write an article for Real Money. Click the "+Follow" next to my byline to this article.
TAGS: Bonds | Bond Funds | Earnings | Investing | Stocks | World | Banking | Financial Services | United States | Analyst Actions | U.S. Equity | Stock of the Day