Cisco Systems Inc.  (CSCO) investors are waiting for a signal as the 2019 outlook for the networking giant remains a matter of debate.

Shares of the switch king were up a hair near Wednesday's opening bell as Cisco expects to report fiscal second-quarter results after the close. Analysts debating the outlook are expecting earnings per share of $0.72 and revenue of $12.4 billion to be the metrics for any earnings move.

The tepid move comes after a run of 10% in the last month and a rise on Tuesday despite a downgrade from Morgan Stanley, which thinks shares of Cisco may be running a bit too hot.

"Estimates build in continued strength, and although Cisco is steadily executing on the Security opportunity we think the current pace is unlikely to offset deceleration in the traditional hardware cycle," Morgan Stanley analyst James Faucette said. "We are satisfied with multiple expansion to date and are stepping to the sidelines."

Based on Cisco's run into earnings, Faucette downgraded the stock from "Overweight" to "Equal-weight" and reined his price target to $49 from $51, offering little premium in his estimate.

Action Alerts PLUS portfolio manager Jim Cramer warned of the run as well.

"You get too much enthusiasm for that stock, then you end up having it down a couple bucks if they don't please the hedge funds," Cramer cautioned ahead of Wednesday's release. (Cisco is a holding of Cramer's Action Alerts PLUS charitable trust.)

Piper Jaffray analyst James Fish added to the caution, noting that while he believes the quarterly report will remain strong and indeed please many, there are concern on guidance.

"Our discussions with partners this quarter suggest that there was some net pull-in of demand related to the tariffs, which took pipeline away from the fiscal third quarter. Additionally, investors have been much more skeptical in recent weeks around the software transition, as fewer details have been provided by the company," Fish said. "We issue some caution on shares of Cisco into the print given the potential guidance miss."

Expected guidance will necessitate a marginal improvement in performance, with EPS consensus guidance of $0.76 and revenue of $12.8 billion for the April-ended quarter.

Fish said management may look to increase the dividend paid to shareholders to offset disappointing guidance, which is possible amid a tougher macro environment stung by tariffs and a slowdown in on-premises infrastructure spending.

However, the macro environment also provides a sanguine outlook for those who think potential bans that Huawei Technologies Co. could face will push business toward Cisco in 5G infrastructure. 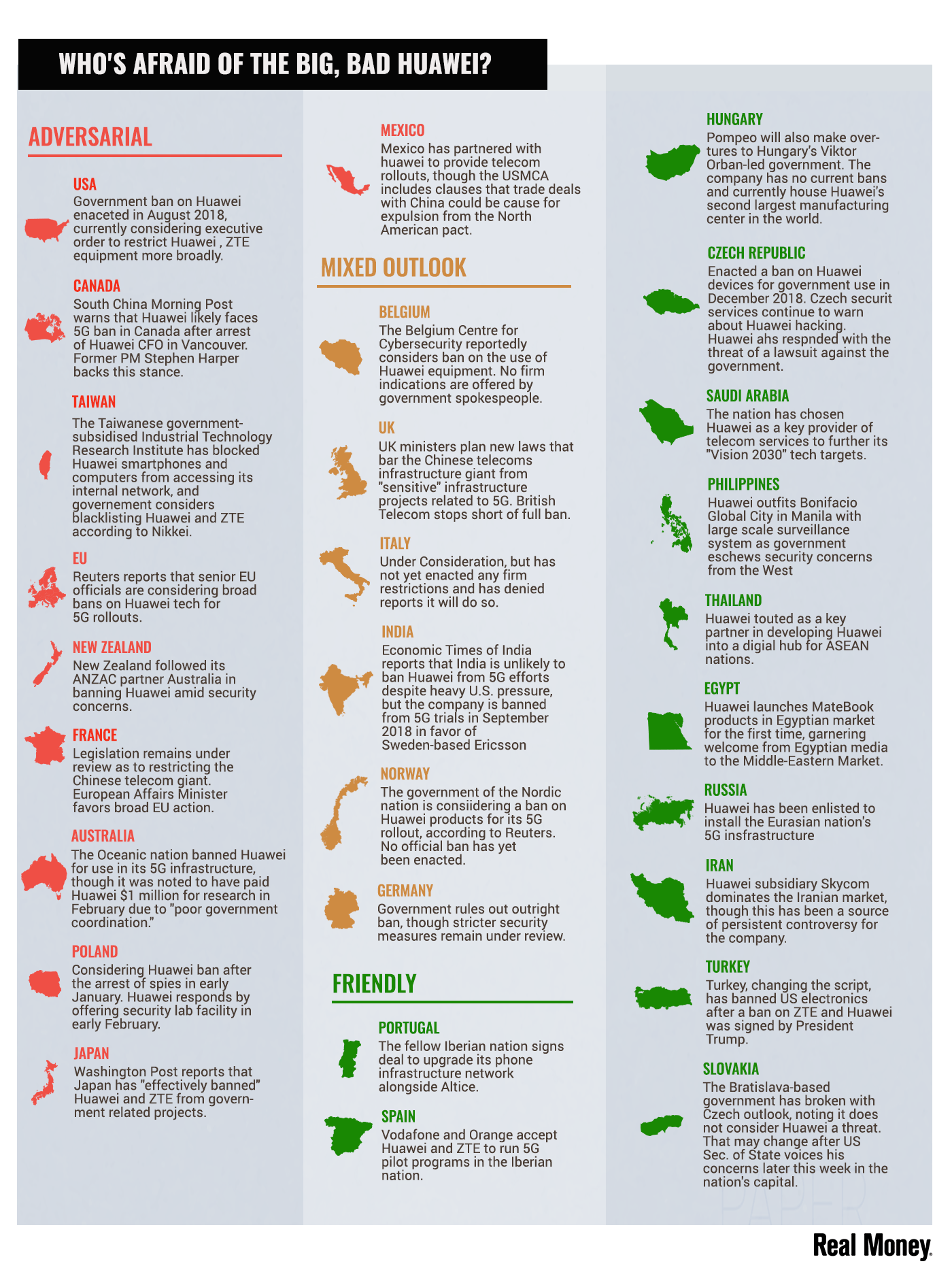 "While the U.S. is considering a potential order to stop the use of Huawei equipment by U.S. service providers, the opportunity in the domestic market is fairly limited given Huawei's largely nonexistent presence," Chatterjee wrote. "A greater opportunity lies in the international markets (EMEA and APAC ex-China) and we expect companies with established global presence (again primarily Cisco and Ciena (CIEN) amongst others) to be well positioned to benefit from a pullback in business wins relative to 5G networks for Huawei."

More broadly, analysts have noted Cisco's ability to navigate a difficult macro environment, specifically in regard to a government shutdown and the impact of tariffs over recent quarters.

"Cisco has successfully executed through a tough macro/political environment (negative GDP revisions, tariffs) in recent quarters, and our solid NA/European checks are further proof Cisco's transformation is resonating with customers," Oppenheimer analyst Ittai Kidron said in a bullish take on the stock. "While there are some headwinds associated with the recent government shutdown (large/highly profitable vertical) and we see potential for another shutdown and escalating tariffs, we feel that any associated negative impacts to the quarter should be relatively constrained and generally understood by investors."

Still more bullish was the Action Alerts PLUS portfolio.

"We see upside resulting from an improved earnings profile as the company transitions from lumpier hardware sales, toward a recurring software and security revenue stream,' the Action Alerts PLUS team wrote. "We also believe the reduction in DRAM prices, a major input cost for the company, is proving to be a near- to- mid-term tailwind."

Those factors, coupled with an ability to navigate GDP sluggishness, have led the team to a price target of $52 per share and a "One" rating for Cisco, denoting a buying opportunity.

For those playing the long side of the trade as the analyst consensus suggests, there will be a few key catalysts to keep an eye on aside from the macro factors that touch upon the company's sprawling business. 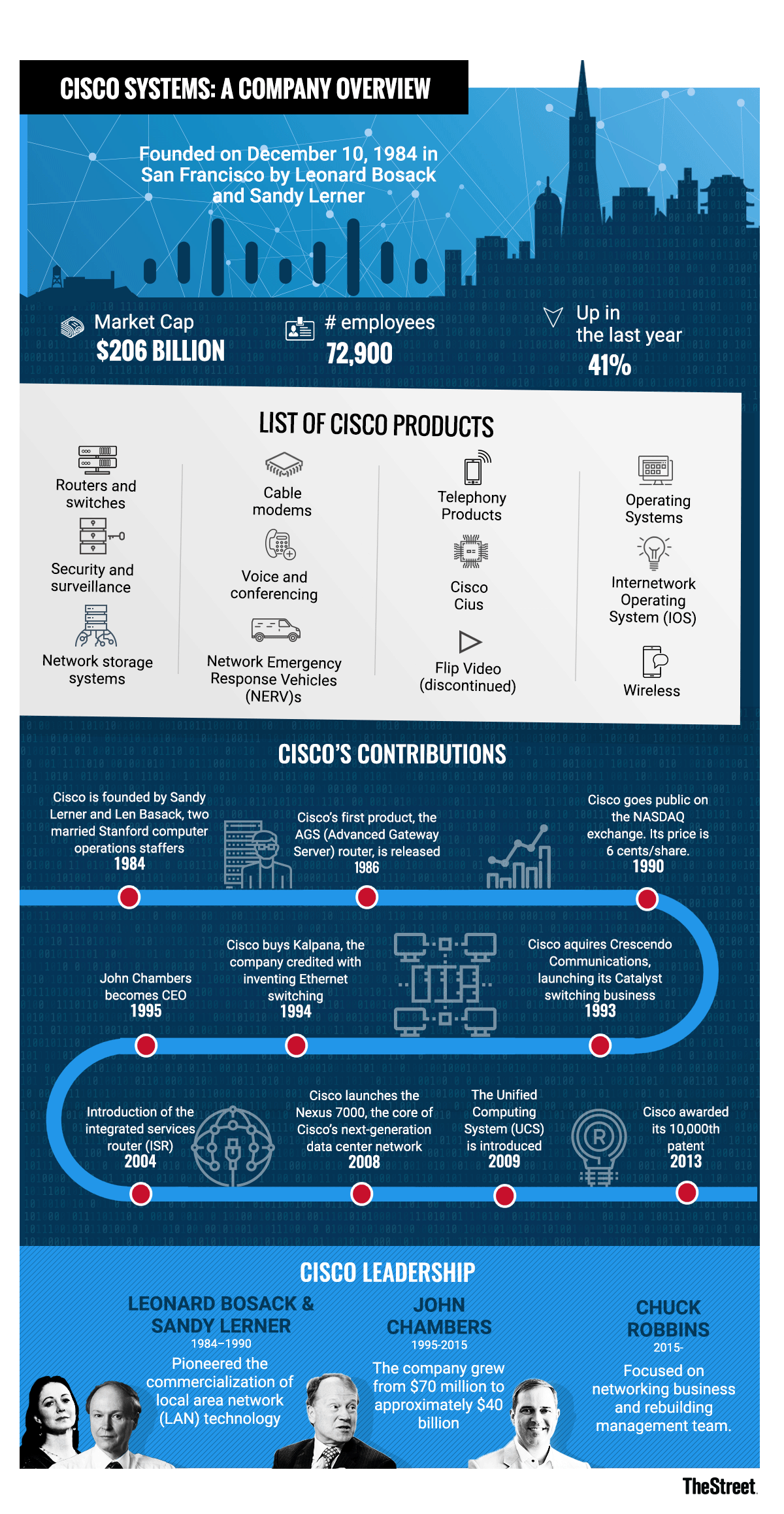 Perhaps foremost among the issues to watch is the ability of the company to integrate its acquisitions.

Cisco CEO Chuck Robbins led Cisco on an acquisition spree in 2018, buying out up Duo Security, July Systems, Accompany and Skyport Systems. Any comments on the performance of these new business units will be a key to where the stock heads.

"We think combined acquisition benefit should add significantly to the Security segment, the software and cloud segments, and the Enterprise/Commercial growth rates," Needham & Co. analyst Alex Henderson wrote in a note on Monday.

Another consideration is the December announcement of a $660 million buyout of semiconductor company Luxtera.

"With Cisco's 2018 Visual Networking Index projecting that global Internet traffic will increase threefold over the next five years, our customers are facing an exponential demand for Internet bandwidth," Executive Vice President of Networking and Security David Goeckeler said at the time of the purchase. "Coupled with our silicon and optics innovation, Luxtera will allow our customers to build the biggest, fastest and most efficient networks in the world."

The ability of Cisco to scale these investments will be pivotal to longer-term investors.

Still, the newness of the acquisitions will make their impact difficult to project ahead of earnings and may lead many to prefer a wait-and-see approach to Cisco, even among more bullish bettors.

Cisco is a holding in Jim Cramer's Action Alerts PLUS member club. Want to be alerted before Jim Cramer buys or sells CSCO? Learn more now.

Get an email alert each time I write an article for Real Money. Click the "+Follow" next to my byline to this article.
TAGS: Earnings | Investing | Stocks | Software & Services | Technology | Technology Hardware & Equipment | China | United States | Real Money | Analyst Actions | Stock of the Day