Robbins said the Acacia deal has been a long time coming but he still feels that Cisco is getting a reasonable price. He said the 5G wireless buildout is happening now. That's why it was crucial for Cisco to combine forces with Acacia.

Read more about the interview here.

Let's check the charts of CSCO.

In the daily bar chart of CSCO, below, we can see that prices stalled in the $46-$48 area in the June to early August period. Prices gapped lower in August, which started a decline into late October. CSCO has recovered since early November but now prices have stalled at $46, which is the bottom end of the June-August resistance zone. Old-time chart readers are worried.

CSCO is not far above the rising 50-day moving average line and the rising 200-day line. We see that the 50-day line is ready to move above the 200-day line for a bullish golden cross but unfortunately this signal is very belated.

The On-Balance-Volume (OBV) line has improved from early November telling us that buyers have been more aggressive but the line has not broken above its August peak and that is a disappointment. The 12-day price momentum study shows that momentum has been weakening since November even though prices have moved higher from November to January. This is a bearish divergence and can foreshadow price weakness ahead.

In this weekly bar chart of CSCO, below, we can see that prices are still in a longer-term decline from around the middle of 2019. Prices are above the rising 40-week moving average line.

The weekly OBV line shows a disappointing rise from October and the MACD oscillator is poised to cross the zero line but the two moving averages that make up this indicator have begun to narrow. This tells us that the strength of the advance is fading.

In this daily Point and Figure chart of CSCO, below, we can see a potential upside price target of $50 but we also see that a trade at $43.08 would weaken this picture. 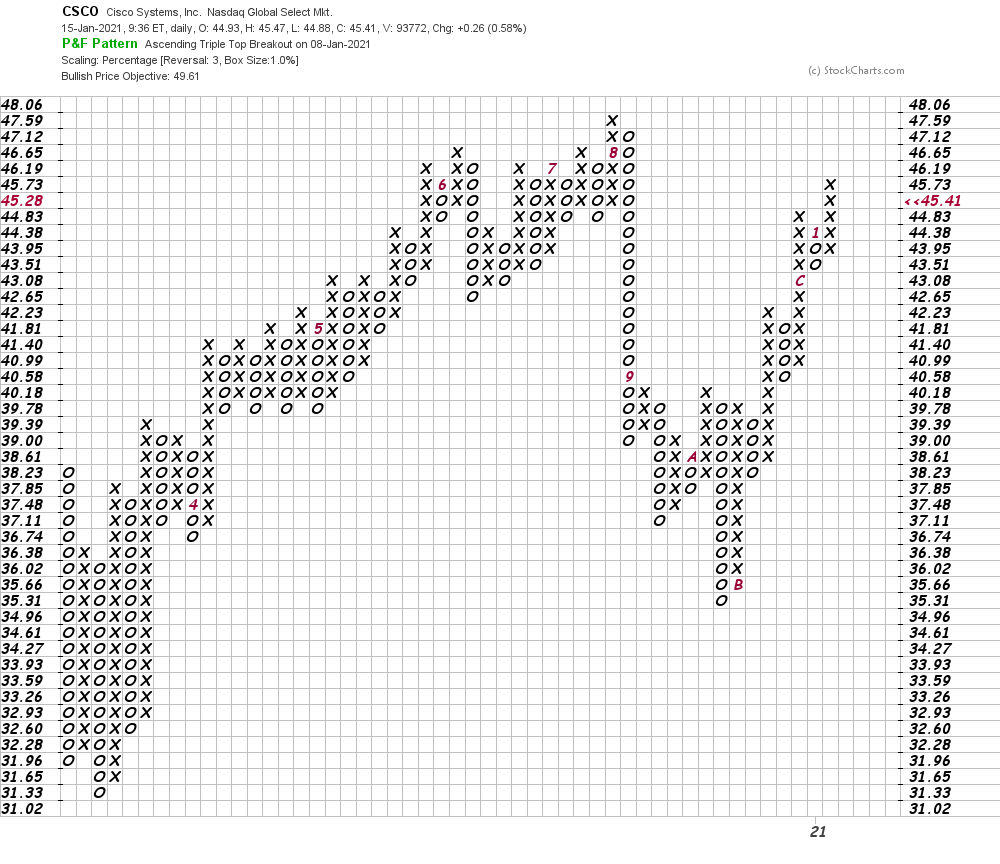 Bottom-line strategy: It looks like CSCO has stalled at the bottom end of a resistance zone. A decline to $43.08 or lower looks like it can precipitate further losses. Avoid the long side of CSCO for the next several weeks.

Get an email alert each time I write an article for Real Money. Click the "+Follow" next to my byline to this article.
TAGS: Investing | Stocks | Technical Analysis | Software & Services | Technology Hardware & Equipment | Mad Money | Executive Interview