Cisco Systems Inc. (CSCO) has been basing the past six months or so and its upcoming quarterly results are due to be released after the market close Wednesday. Let's check the charts to see if traders are taking a bullish stance ahead of the Action Alerts PLUS holding's fiscal second-quarter numbers.

The daily On-Balance-Volume (OBV) line has been firming since early October and tells us that the buyers of this tech company have been more aggressive. The Moving Average Convergence Divergence (MACD) oscillator made its low back in late August and has been improving since then. The indicator is now above the zero line in positive territory.

In the weekly bar chart of CSCO, below, we can see the price movement of the last three years. Prices rallied sharply from the middle of 2017 and then corrected lower last year. The correction roughly stopped in an area of prior resistance.
CSCO looks like it has rebased and is set to try the upside again. The 40-week moving average is above the market and in a downtrend.
The weekly OBV line shows a steady movement from early October. An OK pattern but a strongly rising OBV line would tell a more bullish story. The MACD oscillator crossed to the upside in December for a cover shorts buy signal.

In this Point and Figure chart of CSCO, below, we used daily price data. Here we can see a potential upside price target around $61. 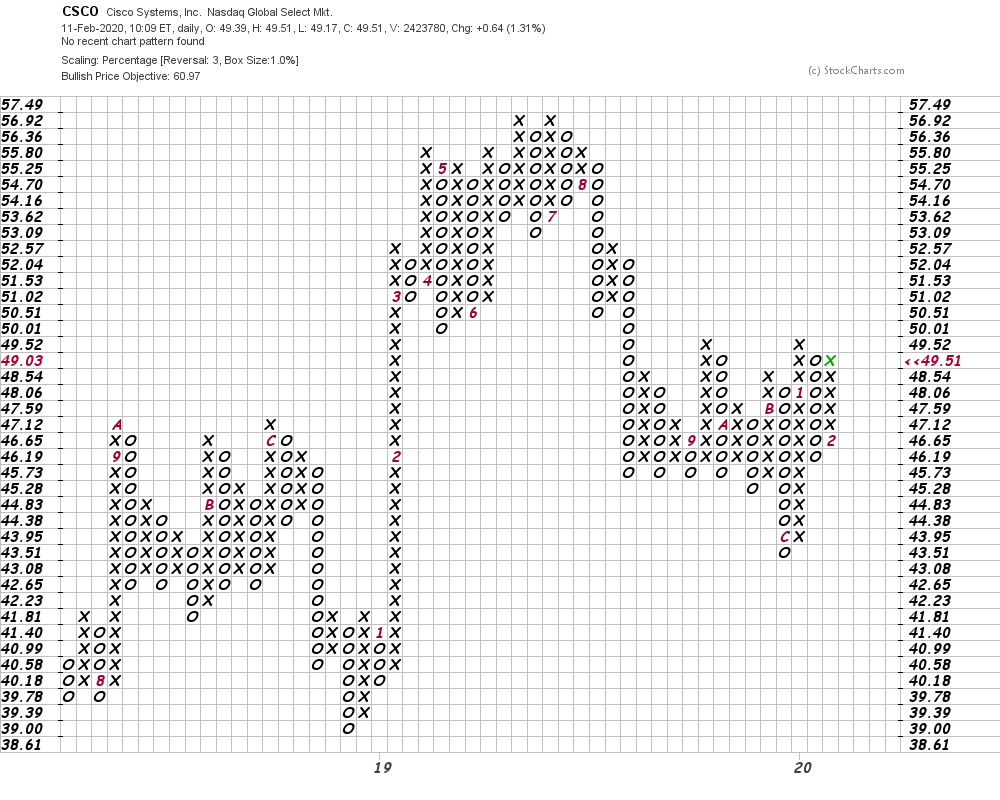 Bottom-line strategy: A trade at $50.01 will be a fresh new high on the Point and Figure chart (above) and should precipitate further gains. Aggressive traders who do not mind going long in front of an earnings report could go long risking a close below $47 looking for gains to the $60 area in the weeks ahead.

Get an email alert each time I write an article for Real Money. Click the "+Follow" next to my byline to this article.
TAGS: Earnings | Investing | Stocks | Technical Analysis | Software & Services | Technology Hardware & Equipment