Ciena Corp. (CIEN)   released its fiscal second-quarter numbers Thursday morning and its shares soared as the provider of networking systems saw its earnings per share climb to 48 cents, which was double year-ago earnings and well ahead of the consensus estimate of 41 cents. Ciena's operating margin was 12.7% versus 7.7% a year ago, and Networking Platforms revenue was particularly strong. Ciena closed up nearly 27% Thursday.

Let's check out the charts for Ciena here on Friday.

In this daily bar chart of CIEN, below, we can see a strong rally from last June to late February/early March with prices nearly doubling. Prices corrected to the downside in March through May and this month the rally resumed with a big gap and heavy volume. CIEN is back above the bottoming 50-day moving average line and the rising 200-day line.

The picture in May was not so bullish with the 50-day line declining and prices breaking the 200-day average. The On-Balance-Volume (OBV) line was interesting in that it rose from last June to the end of February and then moved sideways when prices corrected to the downside. This suggested that investors largely held their long positions despite a $10 pullback. The Moving Average Convergence Divergence (MACD) oscillator was below the zero from the middle of March until Thursday of this week.

In this weekly bar chart of CIEN, below, we can see a sideways consolidation pattern from June 2016 to June 2018 followed by an uptrend. Prices consolidated around the $22 area, so a double to $44 is not a surprise. A price of $66 would be a triple from the base level. CIEN is above the rising 40-week moving average line. The weekly OBV line is bullish and the MACD oscillator is quickly crossing upward to a fresh go-long signal.

In this Point and Figure chart of CIEN, below, we can see that a trade at $45.73 will be a breakout. An upside price target of around $69 is indicated. 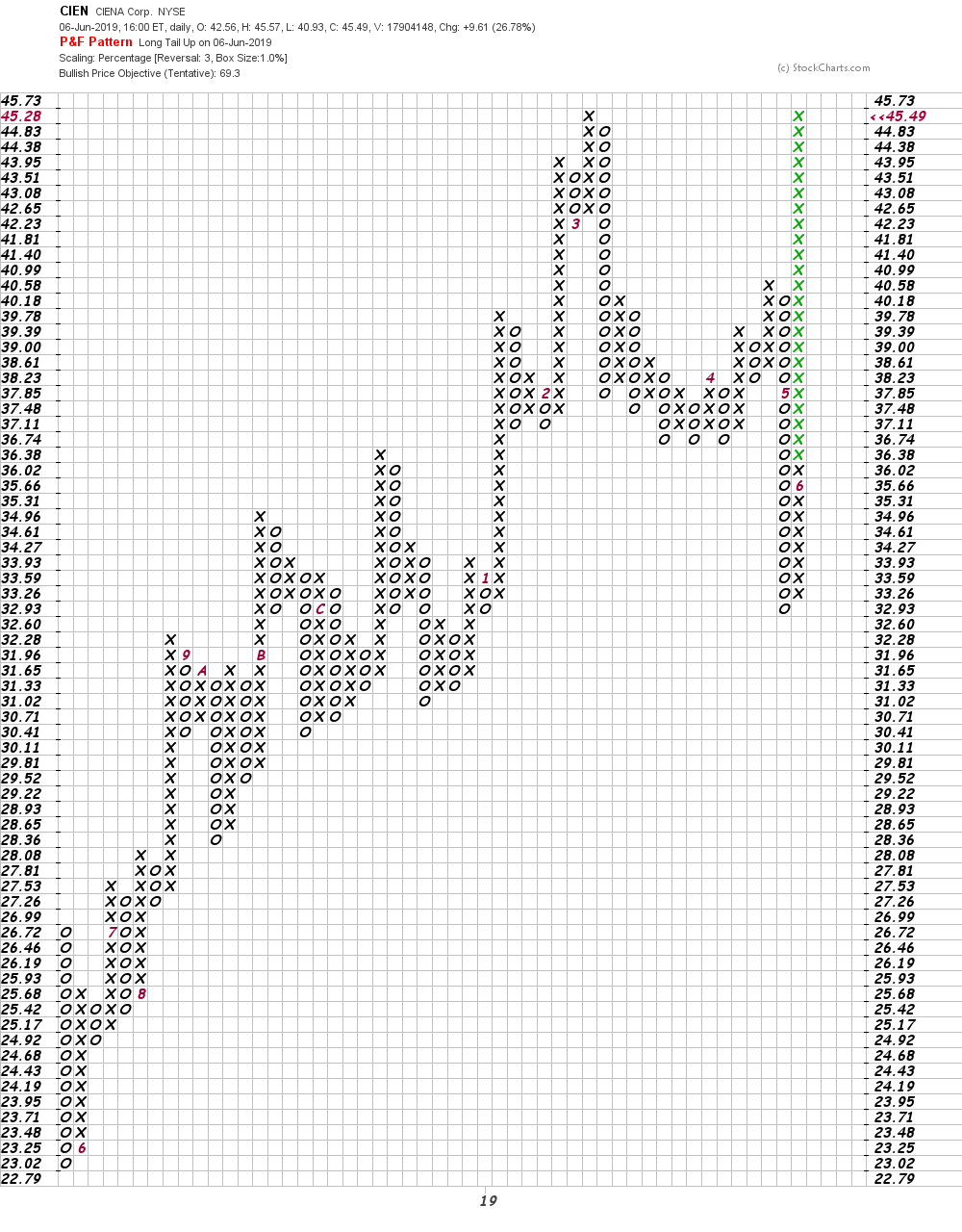 Bottom line strategy: The chart of CIEN turned bullish overnight. Aggressive traders could consider going long closer to $44 if available, risking a close below $39. The $66-$69 area is our upside price target.

Get an email alert each time I write an article for Real Money. Click the "+Follow" next to my byline to this article.
TAGS: Earnings | Investing | Stocks | Technical Analysis | Software & Services | Technology | Technology Hardware & Equipment | Real Money