For his first Executive Decision segment of "Mad Money" Thursday, Jim Cramer spoke with Evan Greenberg, CEO of Chubb Ltd. (CB) , an insurance provider that's off sharply from its highs.

Greenberg said there's no doubt the insurance industry will be hit hard by the pandemic and the economic fallout from it. However, he did note that most policies only cover business interruptions caused by physical damage, not economic damage caused by pandemics. Greenberg also said the crisis is hitting the whole country for a prolonged period of time, and that the only entity that can insure that infinite level of damage is the government.

Let's check out the charts and indicators of CB now as I suspect it will be a long time before the government gets involved.

In this daily bar chart of CB, below, we can see the steep and swift decline from early February to around the middle of March. Trading volumes were very heavy in March, which I take as a good sign as it can represent capitulation selling or selling by weak hands and buying by strong hands with a longer time horizon. The 50-day moving average line and the slower-to-react 200-day moving average line both have negative slopes. The death cross of these two indicators came too late to be much help in selling as the bulk of the decline was nearly over.

The daily On-Balance-Volume (OBV) line shows a decline from last September, which I find interesting. The Moving Average Convergence Divergence (MACD) oscillator shows a cover shorts buy signal last month but this indicator has begun to narrow, so we could see a fresh outright sell signal next.

In this weekly bar chart of CB, below, we went back 10 years to get some perspective on the decline. Prices retested price levels not seen since 2014. That is a lot of damage but it may have made prices a lot more attractive or "undervalued," as fundamental analysts might say.

In this daily Point and Figure chart of CB, below, we can see that the software is projecting a possible downside price target of around $100. 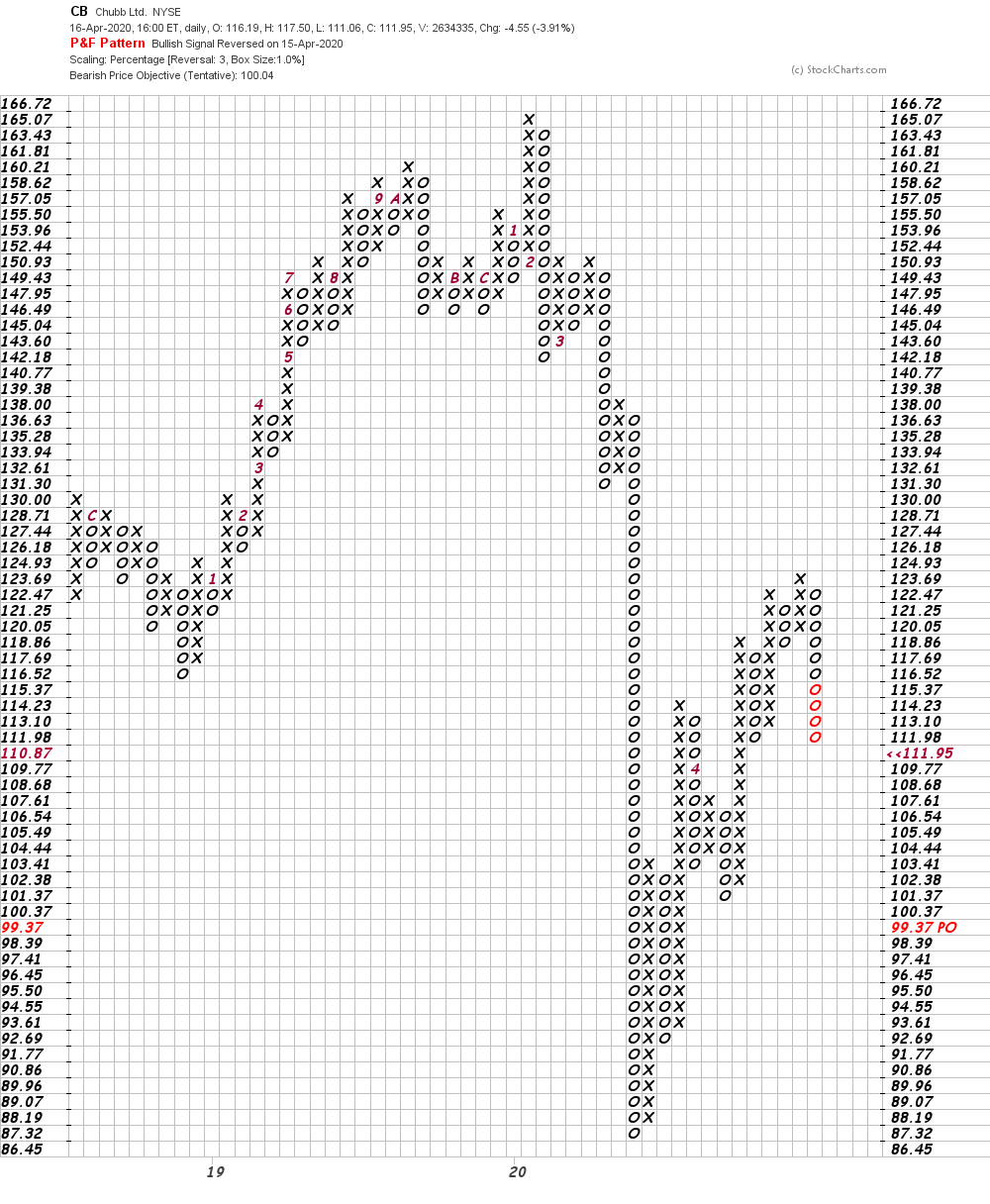 Bottom line strategy: A lot of damage has been done to the charts of CB and there seems to be a lot of unknowns about how many claims will be filed in the months ahead. Investors can take their time with CB. Let a retest of the March low unfold and then wait and see if signs of aggressive buying develops. Stick to stocks that are already going up and avoid laggards.

Get an email alert each time I write an article for Real Money. Click the "+Follow" next to my byline to this article.
TAGS: Investing | Stocks | Technical Analysis | Commercial & Professional Services | Financial Services | Mad Money | Executive Interview | Real Money | Coronavirus