For his second "Executive Decision" segment of Tuesday's Mad Money program, Jim Cramer spoke with Brian Niccol, chairman and CEO of Chipotle Mexican Grill (CMG) , which just reported strong earnings and a bullish forecast for the rest of the year.

Niccol said there's a lot of momentum at Chipotle and they are expertly navigating "tricky headwinds," while still seeing strong demand.

While other restaurants are seeing staffing shortages, Niccol said turnover at Chipotle is the lowest it's been in years.

Chipotle continues to invest in automation and technology, Niccol added. The company continues developing a new chip-making robot that fries, salts and seasons chips to perfection. They're also looking to automate the jobs employees hate the most, like dishwashing and cutting and coring avocados.

Cramer said Chipotle remains one of the best restaurant chains in the business.

In our last review of CMG on March 9 we wrote that "Weak-looking charts and a quantitative downgrade are not helping. Avoid the long side of CMG for now. A weekly close below $1,300 is bearish."

The daily On-Balance-Volume (OBV) line declined in April and the Moving Average Convergence Divergence (MACD) oscillator is pointed down and close to the zero line.

In the weekly Japanese candlestick chart of CMG, below, we see a mixed to bearish picture. Prices are trading below the cresting 40-week moving average line. The candles show a large bearish engulfing pattern this month and this may be hard to overcome. The large lower shadow in early February is probably going to define the downside for now.

The weekly OBV line shows weakness the past two months. The MACD oscillator remains below the zero line and points down.

In this daily Point and Figure chart of CMG, below, we can see a potential downside price target in the $1,211 area. 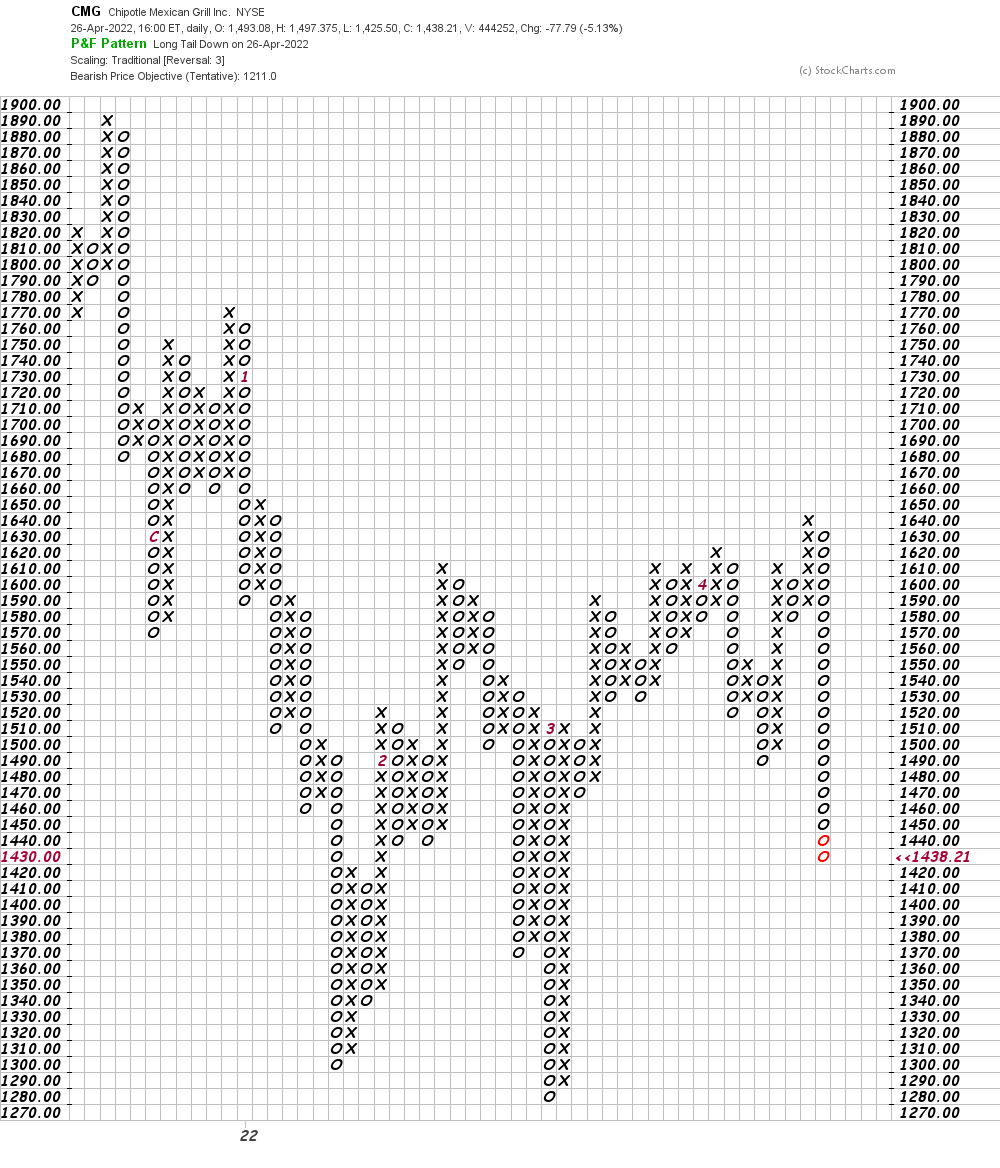 In this weekly Point and Figure chart of CMG, below, the software projects a $1,231 price target.

Bottom-line strategy: In the short-run shares of CMG could bounce higher but the overall condition of the charts and indicators suggest further sideways price action with the risk of longer-term declines. Avoid the long side for now.

(CMG is a holding in the Action Alerts PLUS member club. Want to be alerted before AAP buys or sells CMG? Learn more now.)

Get an email alert each time I write an article for Real Money. Click the "+Follow" next to my byline to this article.
TAGS: Earnings | Investing | Stocks | Technical Analysis | Restaurants | Mad Money | Executive Interview