Friday morning. Zero-dark. Is this it? Is today "that day?" Maybe. Good or bad, this day will not bring conclusion. Progress? Hopefully. Far better to wake in hope that we may witness the end of the beginning, rather than the beginning of the end.

I know you. You know me. Life without a guarantee. Rock on. Good with the bad. You face negative days, negative weeks, negative months. Many cannot imagine the possibility of working far more than full time for negative income. You fight that fight. You trust your ability. A thousand reasons not to be here. You only needed one. Just one. Yet, you stand here, by my side, as late night melts into early morning. God bless.

Brothers. Sisters. By my side. Today, we rise. Today, we take what is ours. Today, we make it count. Now go. Make me proud. Make yourselves proud. Fight. Bell to bell.

Thursday's session brought with it higher equity prices on higher trading volume. There was strength in energy, in materials, in the semis, In certain Industrial names, including the rails, Norfolk Southern (NSC) and Union Pacific (UNP) stood out. In other words, trade/growth type names performed. Did I leave anyone out? Yes, I did. The banks. Suddenly improving prospects for a "trade peace" forced longer-term yields toward multiday highs, while having a lesser impact on the short end of the curve. That creates improved spreads.

When spreads expand, so do the prospects for net interest margin going forward. You get some momentum there, and ... well, the big banks (which mostly report next week) are just a wee bit undervalued. Know what I mean? These banks can be as profitable as they want. The marketplace assigns valuation across the industry in accordance with net interest margin. Wake that beast up and the market will notice the profitability as well. Both the SPDR S&P Bank ETF (KBE) and the SPDR S&P Regional Banking ETF (KRE) easily out-performed the S&P 500 itself.

Equity index futures have traded considerably higher overnight, as have global equities themselves. Both the S&P 500 and the Nasdaq Composite threaten to break above their respective 50-day simple moving averages (SMAs) once those bells at 11 Wall Street and Times Square clang from their respective podiums. The indices only gave these lines up in mid to late September. Piercing and then holding these levels will force action taken by many of those who move money. Will that be the case this day? Hard news out of Washington has been scarce. I will say this about anything U.S. Trade Representative Robert Lighthizer touches -- you don't hear anything. Nothing. No leaks. That guy is a pro.

Xinhua, a Chinese state-owned news agency, has reported that the Chinese side has come "with great sincerity," that the Chinese side "is willing to engage in serious exchanges with the U.S. on trade balance, market access, investor protection and other mutual core issues." Sound like a bunch of malarkey to you? Maybe, but you know what? This is a whole lot more positive than what was reported in the South China Morning Post little more than 24 hours ago. I'll take it.

That said, the U.S. side, as well as the Chinese side, may just be willing to take what they can. U.S. President Donald Trump said the first day of higher-level trade talks on Thursday went "very well." What did you expect him to say? The truth is that the man has not been shy in the least when slighted, so maybe this can truly be seen as positive messaging.

Remember, Vice Premier Liu He has been invited to the White House Friday evening. That is taken as another positive message. In addition, the bar has been set quite low going into the negotiation. Nobody is looking for a comprehensive solution to the structural issues that have created such an aura of contention. To get a "win" today, all that might be needed would be the much-spoken-of currency pact that prevents artificial devaluation on the Chinese side along with enough promised Chinese agricultural purchases as to have some impact on the balance of trade. In exchange, the U.S. would likely need to at least suspend coming deadlines for the escalation of tariffs, as well as relaxing the ban on U.S. technology companies doing business with certain Chinese customers, such as Huawei Technologies. That's your lowered bar.

Oh, just one more thing. Both sides at a minimum have to express plans to discuss those pesky structural issues that are so very important. I have doubts the Chinese side will ever admit to items such as intellectual property theft or forced technology transfers as a real cost of doing business. The fact is that Friday's headlines don't need to paint this picture. Both sides need a win. Both sides likely give each other what they need. Today. Nothing more.

Those just now ripping their greasy heads away from their disgusting pillows will find crude oil trading a bit higher here on Friday morning. The Iranian state-run IRNA news agency is reporting that an Iranian tanker (The Sabity) in the Red Sea had been hit by two missiles launched from the Saudi Arabian port city of Jeddah. There was apparently a spillage that has been brought under control. What does continued instability in the region do to energy pricing? We now have seen not only attacks on infrastructure, but also on the mode of transport as well.

Interestingly, this news comes almost simultaneously with news that the International Energy Agency (IEA) has downgraded the agency's outlook for growth in global crude demand to 1 million barrels per day in 2019 and 1.2 million barrels per day in 2020. These estimates lop about 100,000 barrels off of previously made estimates and shape up as what could be the weakest full-year number for global demand since 2016.

One must now ask, "Is this the right day for bankers involved in placing a valuation on Saudi state-owned energy giant Saudi Aramco to do so?" We all know that Crown Prince Mohammed bin Salman has been planning to list roughly 5% of the firm domestically at the Tadawul Exchange, and then eventually move forward with an international listing at a more liquid exchange elsewhere in order to raise billions of dollars that would be put toward reforming and diversifying the Saudi economy.

The Crown Prince has been eyeing a valuation of close to $2 trillion and it had been thought that key investment bankers such as J.P. Morgan (JPM) , Morgan Stanley (MS) and Goldman Sachs (GS) as part of a larger group, might come up with an estimate for this valuation as soon as today after gauging investor interest. In this environment for fossil fuels, there is significant risk that the Crown Prince might not be impressed with the number he hears. Should this be the case, does the Aramco initial public offering (IPO) even move forward?

Most readers likely did not notice that the Federal Reserve on Thursday had finalized a proposal for new rules that will permit some banks to reduce capital and liquid assets. Within the proposal are plans to allow smaller banks to reduce aggregate holdings of liquid assets, while also allowing some midsize regional banks to avoid annual stress tests. Banks that pass the "adverse" scenario would no longer need to model that scenario, but only the "very adverse" scenario thereafter if I am reading this right.

Requirements are also not likely to change for foreign banks. There had been suggestion made that foreign banks might need to hold enough liquid assets to cover 30 days of operations, as is the case with U.S. banks. They instead will be held to the lesser requirement of 25.5 days.

It is key to note that Reserve Board Governor Lael Brainard was not in agreement with these proposals. Brainard said, "At a time when the large banks are profitable and providing ample credit, I see little benefit to the banks or the system from proposed reduction in core resilience that would justify the increased risk to financial stability in the future." Certainly food for thought.

As labor markets have remained strong throughout a decade-long economic recovery, even if upward pressure on wages has never been more than inconsistent, business has been good for Cintas Corp. (CTAS) . The firm best known as a provider of corporate identity programs -- meaning that they sell and rent uniforms to business clients -- posted a solid fiscal first quarter back in late September. Cintas has done an excellent job of printing earnings growth that exceeds regular single-digit (in percentage terms) revenue growth.

However, this is a technical story, not one of fundamental analytics. The shares have been stopped dead cold at the same place on the chart three times now since mid-August. Take a look. 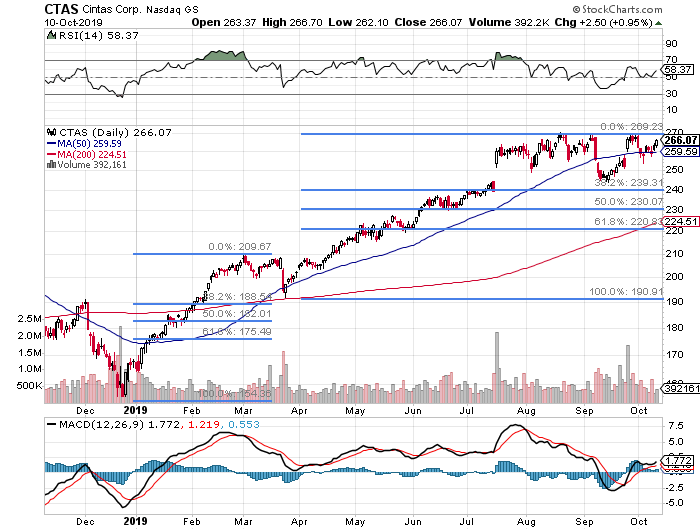 The thing I see here is a stock that since the December 2018 sell-off has obeyed (roughly) what a trader dependent upon Fibonacci's retracement levels for guidance might expect. Support on these retracements comes after significant runs higher have appeared to show at just above (or slightly less than) a 38.2% claw-back on the chart.

Another thing I see is that stop sign at $270. Like a brick wall. The shares ran $2.50 on Thursday to $266.07. Should another attempt at this level be made, and fail, that will likely be the end of that. Should the door open, the algorithms might see this thing as a coiled spring, even if these shares trade at 28x forward earnings.

Technically speaking, there could be a case made for a 20% move in such a case. At $270, that's 54 clams. However, an 8% drop is still a $22 loss. Maybe too much to risk. October 18 $270 calls went out last night at $1.40 and may be worthy of the expense based on risk/reward. I don't see anything of value higher at higher strike prices with this expiration, so this would be a one trick-pony. No spread.

Get an email alert each time I write an article for Real Money. Click the "+Follow" next to my byline to this article.
TAGS: IPOs | ETFs | Investing | Stocks | Technical Analysis | Banking | Energy | China | Middle East | Real Money