What if there is no good or bad? What if there really is no right? No wrong? No correct path? Just a number of different ways to get from point A to point B -- some labeled, other unnamed. All illustrative in aggregate of a multitude of smaller decisions made by a plethora of individual minds aimed at accomplishing many smaller, but different goals?

That sure would play the master strategist inside all of us for the fool, now wouldn't it? Also makes the game afoot just that much more interesting? An intellectual riddle. What joy we share to be challenged in such a way? What a pleasure to be unsure. To be alive, and to know it? Join me, friends. The eternal struggle of humankind versus the unknowable. Only worth it, really, if one is able to enjoy each step (and even each misstep) taken.

While you were sleeping, or watching basketball -- or whatever it is that you wonderful creatures do on weekends -- you may (or may not) have noticed the manufacturing survey numbers put to the tape in China that then put a bid under Asian equities. (That then sparked an early Monday global risk-on sentiment.)

Overtly, the "good" news would seem to be China's twin manufacturing PMIs. Both hit the tape in a state of headline expansion. Optimists will point toward the numbers within the numbers, particularly for the official government survey released by the CFLP (China Federation of Logistics & Purchasing). That release showed a magical improvement in New Orders (easily the life-blood of any manufacturing survey and really any business anywhere) to 51.6. Production improved to 52.7.

All good? Not really. One must first place this data in the context of the Chinese calendar. The March report is historically strong, as this is the first survey that comes on the heels of the Lunar New Year. One must also understand that Beijing has been aggressively stimulative, in an effort to slow the obvious economic decay exhibited across fourth-quarter data points.

This does not mean that there is absolutely no reason for optimism here. Just keep the improvement in context. Export New Orders still printed in deep decline. Since this Chinese data printed on Saturday night, Japan's Tankan survey showed steeper decline in sentiment, both in the present and looking out three months. than what had been expected. Add the twin disasters that are the French and German March manufacturing PMIs. Yes, both of those were actually revised lower from the horrific levels that we took away from the mid-month "flash." Just in case one wondered why Chinese exports might be stuck in a hole. It's not just them, it's their customers too.

What do I see here? A possible (even if artificially created) short-term bottom for the Chinese domestic economy. Perhaps it is here at this level that the Chinese economy can sustain itself for at least a little while, as they work toward what the financial media sees as a trade deal, but would be, in truth, some kind of strategic agreement with the U.S. side. It remains significantly important, in my view, that the U.S. proceed with making available modernized fighter aircraft and continue military cooperation with both Japan and the autonomously governed island of Taiwan.

Those readers out there that are old like me, and may have followed the National Football League for a while, may recall the dominant defensive front four of the Minnesota Vikings back in the day, when the sport was just starting to take a commercial leap in popularity beyond other professional sports, and beyond the college game. Alan Page, Carl Eller, Jim Marshall and Gary Larsen formed an aggressive group that ran with the motto "Meet at the quarterback."

I don't know how many Hall of Famers walk in our ranks, but from my vantage point, on the very early morning of April Fool's Day, it seems that investors have been granted their wish. Investors have indeed gotten their quarter back. A central bank inspired fourth-quarter 2018 melt-down across financial markets that began in October and reached a fever pitch by mid to late December (as the Fed forced one last short-term rate increase that would result, itself, in forcing an inverted yield curve). Nearly simultaneous with that move came the cognitive realization of policy error.

Make no mistake, the Fed did not change course for political reason, the Fed changed course because as a group, in my view, they realized that they were so far in front of other global central banks on policy that their own trajectory had put U.S. multinationals at risk, and that longer-term interest rates could suddenly not keep pace with short-term rates, which, if left untended, clearly arrests economic activity, thus resulting in driving down the velocity of money.

Now, short-term interest rate policy is uncertain, but at least (from an equity perspective), the liquidity drain of the balance sheet management program is set on a course to wind down to nothing late this year. Personally, as a student of economics, and as an observer of human response to both natural and human-made conditions of both surplus and scarcity, I would have preferred to experiment more with reduced levels of quantitative tightening than simply planning for a full stop to the program. Then again, who am I?

What is going on here, as we have alerted readers to several times over several weeks, is an expansion in valuation metrics. Markets are putting much less faith in the Fed's ability to raise short-term rates in the second half of 2019 than Fed Gov. Randal Quarles would like them to recognize. Markets certainly are not pricing in earnings growth. According to FactSet, S&P 500 Q1 earnings growth is looking at something like -3.9%. This while, according to Birinyi Associates, the S&P 500 now stands above 17x the next twelve months' projected earnings. 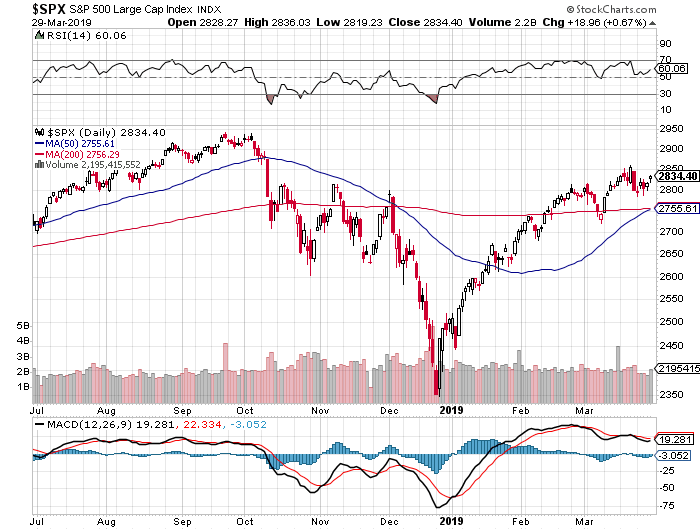 Oh.. one more thing. That "golden cross" that I have been speaking and writing about didn't quite happen on Friday. I would think upon this opening, that cross-over looks, in the darkness of morning, to be most likely imminent. This will also force onto the daily Moving Average Convergence Divergence a bullish crossover of the 12-day exponential move average over the 26-day EMA, while drawing the 9-day EMA closer to the zero bound. For those who read all this that as gibberish, consider the action constructive.

Hope you played the energy game with us over the quarter. While equities muddles along at 12% to 16% depending on the index observed, WTI Crude put quarterly gain of 32% to the tape. This, I thought, was the easiest bottom to pick at a tough time, back in December. It was at that time that we stressed exploration and production companies, as much for the high dividend payments across the industry group as for anything else. Of the names we gave you, Royal Dutch Shell (RDS.A) has under-performed, at up 7% for the year, but both Exxon Mobil (XOM) , and British Petroleum (BP) have significantly beaten the S&P 500, while Chevron (CVX) has also beaten the index -- but by a more pedestrian margin.

Am I thinking about taking profits across the group? Well, yes. I have already been out of Chevron, but that was not because I don't like Chevron, I just needed the funds elsewhere. I have halved my BP, but that was more a function of being called away (a sometimes unavoidable by-product of constantly working to reduce net basis through the sale of related options). I am actually longer XOM, as that was the most significant winner, as well as RDS.A, as I had thought that the name might catch up to the group.

I'll tell you what I'm thinking. I am thinking that if the Saudis get Brent Crude to trade at $70 a barrel, perhaps this is their medium-term goal and at that point they might cut the Russians a break. Brent hits $70, and I take a little something off of my fastball just to see what happens.