We've all been there. Maybe in a position of having to drag something heavy from a vehicle to one's own property. In order to do so, however, the individual just might have to move this heavy "whatever it is" over the neighbor's precious grass. How bad can it be? We'll just move the grass around with our feet when we're done. Yeah, that's the ticket. We can do this.

Can we do this? We, as in the stock market, have had a pretty good week, even as Thursday's regular trading session ended with all three major large-cap indices in the red -- and some of the more specialized, growth-related indices that had led this week, down considerably more. Energy, Financials, Industrials... could all be found at the bottom of the day's sector performance tables, as health care moved back toward the top along with the rest of what are considered to be defensive-type groups.

Not exactly an unwind, though growth did better in relative terms on Thursday. What did not lead was trading volume. There just wasn't much of it. Pure and simple. A lot less shares of stock changed hands on Thursday than did on either Tuesday or Wednesday. Both were huge "up days." While we can probably accurately assign this action to some algorithmic reaction based on rising tension between the U.S. and China, as well as the president's after-hours social media related executive order, it cannot be said that there has been a shift toward mass profit taking... just yet. There is ample reason, however, for some risk-off behavior going into the weekend. Just don't count on anything in these times. Good news is better than bad news is bad. At least right now.

What that means to me is that it will not take much to move equities lower on Friday, but there will have to be a clear impetus, as managers appear reluctant to move. This has been a nice week, and it sure would be nice to get out of here without trampling the grass. Even if risk comes off of the table, it will be key for the S&P 500 to hold the 200-day simple moving average, or the 3,000 level, which are basically the same thing right now. This is likely the spot where at least some algorithms have had at least some reactive execution written into code. The action around this spot, if it gets there, will be fast and furious. Do not expect to have time to react.

At this point, most readers are well aware that the Chinese government in Beijing has moved forward with "national security" laws that impose centralized rule over existing law in Hong Kong. This week, the U.S. State Department has certified to congress that Hong Kong is no longer somewhat autonomous from Beijing. The House of Representatives also passed a bill that would sanction certain Chinese leaders who are involved in the suppression of religious minority groups within that country.

Why equity markets turned lower late in the day on Thursday, and at least in part why European equities as well as U.S. equity index futures have been soft overnight, was the stated intention of President Trump to hold a news conference on Friday in regards to China. Many expect that there could be at least limited or temporary sanctions announced related to this situation in Hong Kong. Trade War? Cold War? Let you know in about half a day. There will be news. There could be an impetus.

After Thursday's closing bell, the president also signed an executive order that "takes a look" at the Section 230 law that shields social media companies such as Facebook (FB)  and Twitter (TWTR) from liability relative to content posted by others on their platforms. The thought here, from a trader's perspective, is that there should be at least some continued pressure on these stocks for as long as this remains headline news. In an ancillary way, other internet stocks without a social media presence, such as Amazon (AMZN) , could also see related pressure due to modern, passive investment styles involving heavy usage of exchange traded funds. FAANG works two ways.

Is the labor market improving? Hard to believe if it is, but economies are opening in an incremental way everywhere. It does make sense. In the U.S., weekly jobless data is posted by the Department of Labor. This week, this department reported that for the week of May 16, 2.123M new individuals had filed for unemployment benefits. This brings the 10-week total above an awful 40M folks being put in this position over that period.

The twist in the numbers was the unexpected decline in continuing claims. That number dropped from 24.912M to 21.052M. Did 3.86M folks go back to work, as 2.123M lost their jobs for the first time? That's what these numbers suggest, barring some kind of error. The proof will be in continuance of this kind of performance. One time can be a fluke. Twice bears watching. Three times is a trend. Let's all hope this net change becomes trend.

The End of Energy Independence?

First we note that on Wednesday, the International Energy Agency (IEA), which is based in Paris, forecast that due to a lack of available capital, U.S. shale producers could reduce investment by as much as half for the full year. On Thursday, the armada landed -- or at least started to. Oil imports into the U.S. surged last week.

The Energy Information Administration (EIA), which is U.S. based, noted that imports from Saudi Arabia popped for the week ending May 22 by nearly 1M barrels per day. Commercial imports from all sources increased a rough 40% from the week prior, to 7.2M bpd. What's going on is simple. Those who need to purchase crude are buying the commodity they need at the lowest prices from the lowest-cost producers who can stand the pain the longest. That's just not us, and it won't be us for the foreseeable future.

What? Those numbers. Salesforce (CRM) ? No. I've got it... Costco (COST) ? No. Marvell Technology (MRVL) ? Those were pretty good, but no. Did that one yesterday. How about Zscaler (ZS) ? Wow, what was that?

In case you were watching something else, Zscaler, which is perhaps the largest provider of cloud-based internet security gateways that in turn inspect the user's traffic for evidence of malware, reported fiscal Q3 adjusted EPS of $0.07 on revenue of $110.52M. Both were good for beats, both were good for roughly 40% year-over-year growth.

On Thursday evening, CEO Jay Chaudhry, taken from the press release, stated that "The mitigation activities taken by every enterprise in response to the Covid-19 pandemic created an immediate need for strong security and access to the internet and business applications, all while working from anywhere."

The firm, as a result, increased both current quarter as well as full year revenue guidance. The shares closed at $75.80 on Thursday, up 1.7% ahead of the numbers. The last sale that I see at zero-dark thirty is a cool $87.38, for an overnight gain of another 15%. Do I expect that gain to hold? No. That is not the point. 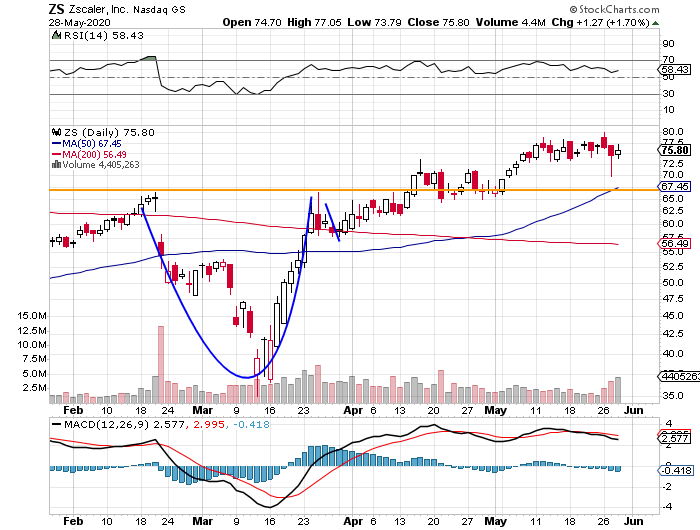 The point is that the cup with handle pattern that we drew up back in March that produced both our $66 pivot and our $81 price target will likely attain that goal once Friday morning's opening bell rings in New York. What to do? Not even a hesitation in my mind.

At that pre-opening last sale, well above target, we'll be looking at a 38% increase, and as a trader, I cannot let that pass without taking some kind of action. I expect to take off half of my Zscaler long at some point this morning. Ring the register. Just my opinion.

Get an email alert each time I write an article for Real Money. Click the "+Follow" next to my byline to this article.
TAGS: Earnings | Economy | Investing | Markets | Politics | Stocks | Terrorism | Trading | World | Software & Services | U.S. Equity