While you slept, equity index futures moved higher. They moved lower. Then they repeated that wiggle. The National People's Congress in China approved that much-spoken-of proposal to impose the new national security law on Hong Kong. Futures markets seemed to almost yawn in response. Crude was already lower. Oil is not down overnight due this development.

Can that be? Is not the deterioration of relations between the U.S. and China a larger story from an economic perspective than this? European equities? Mostly still traded higher on the economic rescue package being put together in that neck of the woods. Perhaps all is already priced in? I have my doubts.

Just one day after U.S. Secretary of State Mike Pompeo certified to the U.S. Congress that "Hong Kong does not continue to warrant treatment under United States laws in the same manner as U.S. laws were applied to Hong Kong before July 1997." To clarify, Pompeo stated "No reasonable person can assert today that Hong Kong maintains a high degree of autonomy from China, given facts on the ground." On the Chinese side, the new law, if enacted, would target subversion of state power, and/or interference by foreign influences, and would be the first time since the British flag was lowered over the city on July 1, 1997, that Beijing could impose criminal penalties into Hong Kong's legal code.

The plan passed in the National People's Congress by a count of 2,878 to 1, with six abstentions. Wow. Just thinking about that one guy. What do I think? I think the world needs to pay attention to what is happening on the Chinese/Indian border. Is one story a simple diversion from the other? There are Indian media reports that Chinese troops have crossed that border in remote regions of the Himalayan mountains. By Indian accounts, there have been a number of "smallish" confrontations where both sides seems to stand up and then stand down. Both sides seem to have built up troop support capabilities on their own sides of a 3,500 km border that is, in spots, disputed. Both sides are worst case... nuclear capable. As an economist, Hong Kong might be the focus. Strategically, this might be the more important story.

As Wednesday evening pushes into the overnight that then melts into Thursday morning, we must ask ourselves about trust. Can we trust a Dow Jones Industrial Average that claims back-to-back 500 point moves to the upside? Can we trust an S&P 500 that retakes both its own 200-day simple moving average as well as the psychological 3,000 level at the same time? Can we trust even the Nasdaq Composite and Nasdaq 100, which both saw benefit from a tremendous mid-morning reversal that just never quit?

Trading volume was just slightly higher at the Nasdaq Market Site. Stocks changed hands at the New York Stock Exchange at a much greater pace on Wednesday than they had on Tuesday. In aggregate for constituent member stocks across both the Nasdaq Composite as well as the S&P 500, the last two days are among the heaviest trading days since the awful days of late March.

Breadth was again overwhelmingly positive. What this means is that there was indeed accumulation in action across the community of portfolio managers, and given the reversal to the upside for many of the groups that had benefited through the pandemic-induced lockdown, there has still not been the level of distribution required to create these moves in a dollar-neutral kind of way. In other words, managers are spending cash. They are keeping one foot on the beach, while dipping at least one toe on the other foot into the water to see if it is safe to keep going. In microcosm, this is what every elected official in just about every jurisdiction in the country is wrestling with on a different level.

Once even the market outliers turned, there really was no looking back on Wednesday as the day wore on. Other than a negative-sounding Beige Book, the drumbeat of the news flow was largely quite positive. From a Los Angeles that seems to be reopening more quickly than expected to a plan to reopen global Walt Disney (DIS)  theme parks in mid-July to Lockheed Martin (LMT) speaking of returning to pre-Covid levels of production this calendar year to Boeing (BA) resuming production of the 737 MAX passenger jet, even as the firm lays off employees. All said, corporate news flow appears to be better than terrible, given the circumstance, and that might be all markets need for right now.

Good question. I'll wait for your answer first. Nope? Nothing? All kidding aside, the question is tough, especially in this, the era of the high-speed algorithm. Heck, even our market crashes and our market recoveries happen in lightning speed. Too fast to reflect what the real economy tells us is a nightmare. Unless the market is pricing in a happy ending. Can that be? Can it be that a round two with this horrible virus might not be as severe as was round one? Or that as a nation, we are better prepared? Can it be that the reopening of local economies continues without severe consequence? Markets seem to be saying this. I do hope they're right.

For a second straight day, the Financials and the Industrials just galloped ahead of the pack. The Financials were again led by the banks. The Industrials, though, saw leadership evolve somewhat, away from the transports and toward aerospace and defense (one industry). Very interestingly, using SPDR Sector Select ETFs as a measuring device, Information Technology (XLK) finished Wednesday's regular session in last place among the eleven groups, but that last place performance was still good for a gain of more than one half of one percent.

I don't know about you, but I am more than willing to underperform at daily growth of a half percent .. all day, and every day. By the way, the weakest industry group within Tech was software, and even the group that finished in last place in the sector that finished in last place, closed in the green. The Dow Jones U.S. Software Index showed an increase of 0.06% for the day.

Only internet stocks closed lower. Something about an "executive order" on the way. That group resides in the Communications Services sector (XLC) these days, and was the only weak link across that sector. In answer to your question, while equity markets are now overbought on many short-term charts, that is just not the case looking down from higher altitudes with the exception of what had worked during the shut-down.

These stocks could, and probably will, at best move sideways as they work themselves out of that condition. The broader rally remains reliant upon the successful reopening of the country, as well as the planet. Keep in mind, even if not properly set up right now for certain individuals, a broadening rally that includes or even focuses on smaller-caps, transports and banks is usually a good thing. For everyone.

Did I mention that there was some pain across the biotechs on Wednesday? No? Well, there was, but really just confined to those names working toward vaccine candidates in the fight against Covid-19. Apparently there was a third volunteer among the 45 that suffered Grade 3 side effects -- severe, but not life threatening -- during the Moderna (MRNA) Phase 1 clinical trials. This is why that particular name has been singled out by sellers over recent days. The catch is this, all three were among the group that received the vaccine at the highest dosage, and that is the one dosage that Moderna did not move forward with into Phase 2. Pretty much, the other biotechs in this race, such as Novavax (NVAX) , Inovio (INO) , BioNTech (BNTX)  and Translate Bio (TBIO) were all hit much harder than were the larger pharmaceutical firms also working toward this end. This group would include Johnson & Johnson (JNJ) , Pfizer (PFE) , GlaxoSmithKline (GSK)  and now Merck (MRK) .

I speak of Workday (WDAY) . The firm reported a small earnings miss on better-than-expected revenue that grew 23% year over year. The stock is moving north overnight. Why? Because not only did subscription revenue grow 26%, but the firm guided subscription revenue for the second quarter. Not higher, but positive. Better than bad. Better than feared. 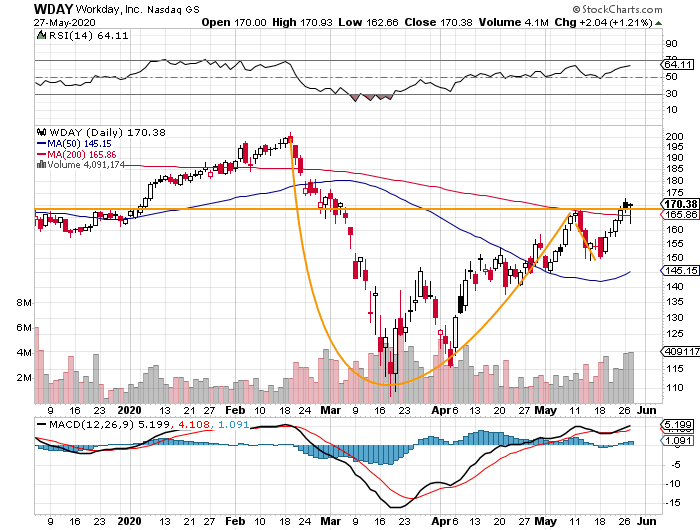 I have no position coming into Thursday morning in WDAY, but I sure noticed the chart, and I thought it worthy of mention for those of you who do. Readers will see that the shares had battled ahead of earnings, with both its own 200-day SMA as well as a cup with handle pattern inspired $169 pivot point. I see the shares trading around $178 as the first glimmer of light appears to the east.

I have no idea if the nearly 5% overnight gain will hold. The market is ripe for a "down" day. Very ripe, in fact. That said, WDAY does not have to hold the overnight move. The stock just has to hold the pivot, to open the door to potentially significant gains beyond what has already happened.

Personally, and it does depend on what the broader market is doing, I would look to enter either later today or perhaps tomorrow if I think that spot holds. Technically at least, should this occur, a target of $200 would be very realistic. Just my opinion.

Get an email alert each time I write an article for Real Money. Click the "+Follow" next to my byline to this article.
TAGS: Earnings | Economy | Indexes | Investing | Markets | Politics | Stocks | Technical Analysis | Trading | World | U.S. Equity | Coronavirus