As a restaurant owner himself, and someone who keeps a close eye on the bar scene in New York City, Cramer said he can confirm that people are more than ready to go out and drink with friends.

Best of all, Constellation reports next week, meaning we won't have to wait long for good things to happen.

Let's take a look at the charts of STZ.

In the daily bar chart of STZ, below, we can see that the shares have made a strong move to the upside from early November. Prices have struggled around the $240 area for months now. STZ is trading below the flat to declining 50-day moving average line. The slope of the 200-day moving average line is positive and intersects around $215.

The On-Balance-Volume (OBV) line has weakened since early April and tells us that sellers of STZ have been more aggressive. The Moving Average Convergence Divergence (MACD) oscillator has made lower highs since November and is now below the zero line for an outright sell signal.

In the weekly Japanese candlestick chart of STZ, below, we went back five years to get some perspective. Prices broke above the highs of late 2017 and early 2018 but then the advance faded. STZ is trading above the rising 40-week moving average line.

The weekly OBV line has stalled in recent months and the MACD oscillator is pointed down with a take profits sell signal.

In this daily Point and Figure chart of STZ, below, we can see a potential downside price target in the $203 area. A trade at $245.76 will turn the chart bullish. 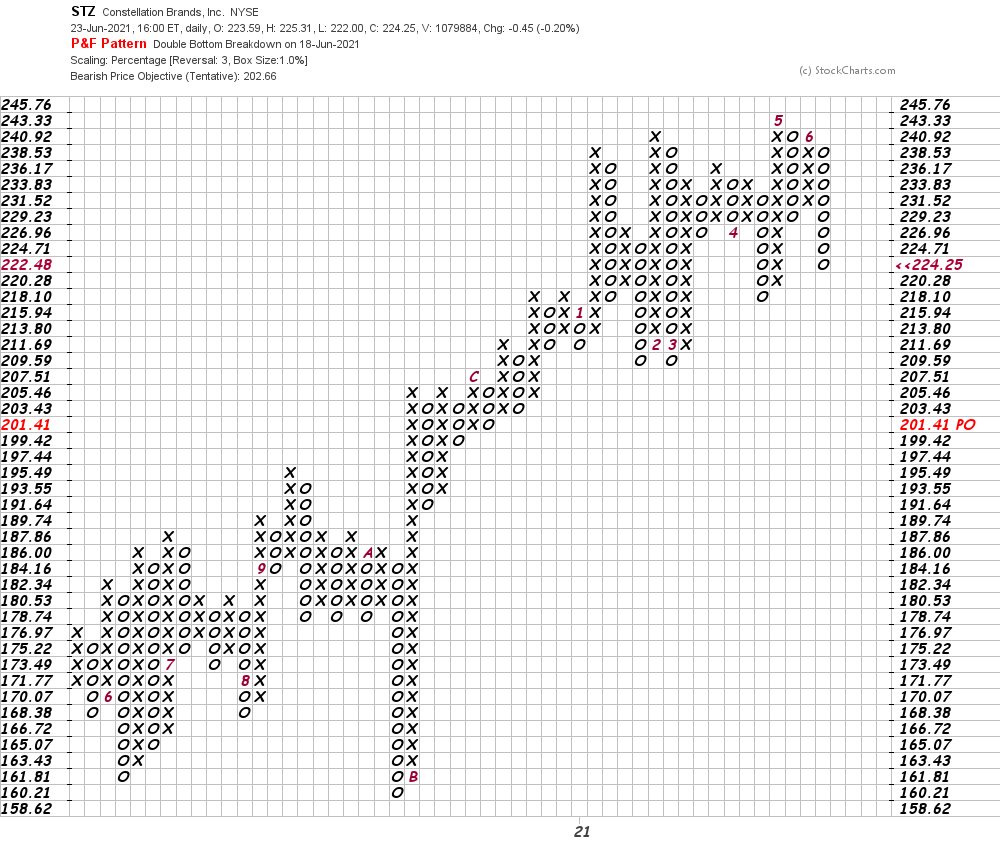 In this weekly close only Point and Figure chart of STZ, below, we can see that the software is projecting a $475 price target.

Bottom-line strategy: Aggressive traders could go long at current levels if they can risk a decline to $205.

Get an email alert each time I write an article for Real Money. Click the "+Follow" next to my byline to this article.
TAGS: Investing | Stocks | Technical Analysis | Beverages | Earnings Preview