By STEPHEN GUILFOYLE Nov 23, 2021 | 12:09 PM EST
Stocks quotes in this article: DG, DLTR
On Tuesday morning Dollar Tree ( DLTR) released its third-quarter financial results (more on that below).
Since the year 2016, which was the first after the combination of Dollar Tree with the old Family Dollar, which Dollar Tree has maintained as a separate brand, the combined firm's compound average growth rate has run at 5.3%. Dollar General ( DG) , considered the dollar store retail niche leader, has seen revenue increase at a rate of 11.3% in comparison. The acquisition of Family Dollar might have expanded the business, however, it did not improve growth or margin.
The weekend prior to last, the Wall Street Journal broke the story that activist investor Mantle Ridge, working with former Dollar General CEO Richard Dreiling, had taken at least a $1.8B stake in the budget conscious retailer, which is good for roughly 7% of the firm and made Mantle Ridge a top two investor in the business.
According to research at Oppenheimer, Mantle Ridge started buying the stock on Sept. 15. By late September, Dollar Tree unveiled plans to test higher price points for certain items (even as high as $5) alongside the store's iconic $1 price cap for its goods.
Now, hold that thought.

For the three months ended Oct. 30, Dollar Tree reported GAAP earnings of $0.96 per share on revenue generation of $6.42B. The earnings (-31% y/y) beat Wall Street expectations by a penny, while sales (+3.9% y/y) ran in line with expectations.
Enterprise same-store sales increased 1.6% system wide (+6.7% on a two-year stack), which breaks down to +2.7% for Family Dollar-branded stores and just +0.6% for Dollar Tree-branded locations.
Needless to say, when revenues grow, and profits crash, there must be margin compression. The cost of sales increased a whopping 9.4% annually, body slamming gross margin down to 27.5% from 31.2%. The company blamed higher freight costs, which were partially offset by improved inventory shrink.
I think the headliner for Tuesday morning for Dollar Tree was news released along with the numbers that after the previously mentioned pricing tests had demonstrated broad customer acceptance of slightly increased price points, that the chain had begun rolling out a new $1.25 average price point and sees the new pricing being implemented at all stores by the end of first quarter fiscal 2022.
Looking ahead, Dollar Tree sees full-year revenue at $26.25B to $26.41B, narrowing a prior view of $26.19B to $26.44B, and pulling the midpoint above consensus view of $26.3B. As for earnings per share, the company now sees $5.48 to $5.58, also narrowing prior guidance of $5.40 to $5.60, but pulling the midpoint below the $5.56 that Wall Street was looking for.

Dollar Tree's cash balance (cash & equivalents) has been more than halved over the past nine months. Still, current assets have increased as that cash has been put into inventory building. Total assets are up small over the same period. Current assets are indeed larger than current liabilities and total assets are larger than total liabilities less equity.
The balance sheet is not exactly weak, but just understand that even with long-term debt roughly even with where it entered the year, and with the cash balance down, it puts the company in a less enviable situation. Now, the current ratio is still plenty strong, but if we were to do a quick ratio for Dollar Treet, which I generally do not do for bricks-and-mortar retailers, with elevated inventories, it might not look so hot.

I think the focus Tuesday is more on the increased price points and the potential positive impacts of having a results-driven activist investor than on actual results or guidance. 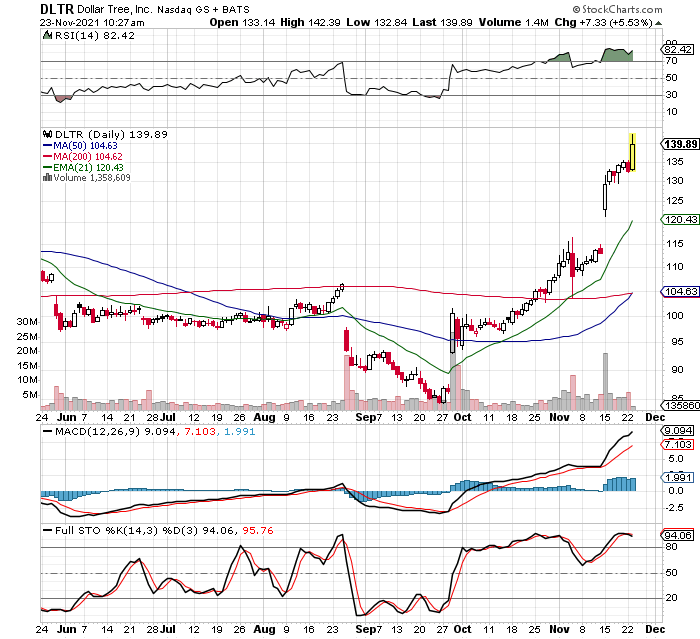 The stock is now up 65% in less than two months. Can I buy some here? Now? I don't think I want to. Readers know that I don't chase.
Relative Strength, the Full Stochastics Oscillator and the daily Moving Average Convergence Diveregence (MACD) are all screaming "overbought" at the tops of their little lungs. There are unfilled gaps in between $115 and $121 from early November, as well as in between $87 and $92 from late September.
I would rather short the name, or at least take some kind of short-term bearish stance that will not expose me to too much pain should I be wrong. I have two ideas.