In his first "Executive Decision" segment during Friday night's Mad Money program, Jim Cramer spoke with Doug Merritt, president and CEO of Splunk Inc. (SPLK) , the big data company with shares down 11.5% over the past month as money managers make room for new offerings such as Snowflake (SNOW) .

Merritt explained that with more and more devices connecting to the Internet, companies need firm's like Splunk to help them capture all of this new data and make sense of it all. Soon, he said, every company will become a data company as they digitize their operations.

When asked about the flood of new companies in the big data space, like Snowflake, Merritt explains that while there are a lot of players, Splunk has been around for 15 years and is still among the fastest growing companies at its size.

We last looked at SPLK back on August 25 ahead of earnings and wrote that. "We have no special knowledge about what SPLK is going to report to shareholders. We do have an opinion about the charts and indicators. Overall, the charts and indicators are mixed but the trends are up heading into earnings. I would continue to hold longs risking a close below $180. The $233 area is our first target with the $260-$278 area after that."
Let's check out the charts of SPLK again as traders should have been stopped out last week.
In the daily bar chart of SPLK, below, we can see that the shares have been weak this month. SPLK is trading below the now declining 50-day moving average line. Prices have broken below the lows of August and also July as they push down into support from June.
The trading volume has increased from late August as traders are voting with their feet. The On-Balance-Volume (OBV) line has been in a decline from early August telling us that sellers of SPLK have been more aggressive.
The Moving Average Convergence Divergence (MACD) oscillator peaked in early June and has diverged from the price action for months now. The MACD oscillator crossed below the zero line earlier this month for an outright sell signal.

In the weekly bar chart of SPLK, below, we can see a weakening picture. Prices have declined and are in a position to test the now cresting 40-week moving average line.

The weekly OBV line shows weakness as does the MACD oscillator which has crossed to the downside for a take profits sell signal.

In this daily Point and Figure chart of SPLK, below, we can see a potential downside price target around $143 but better chart support is probably in the $130s. 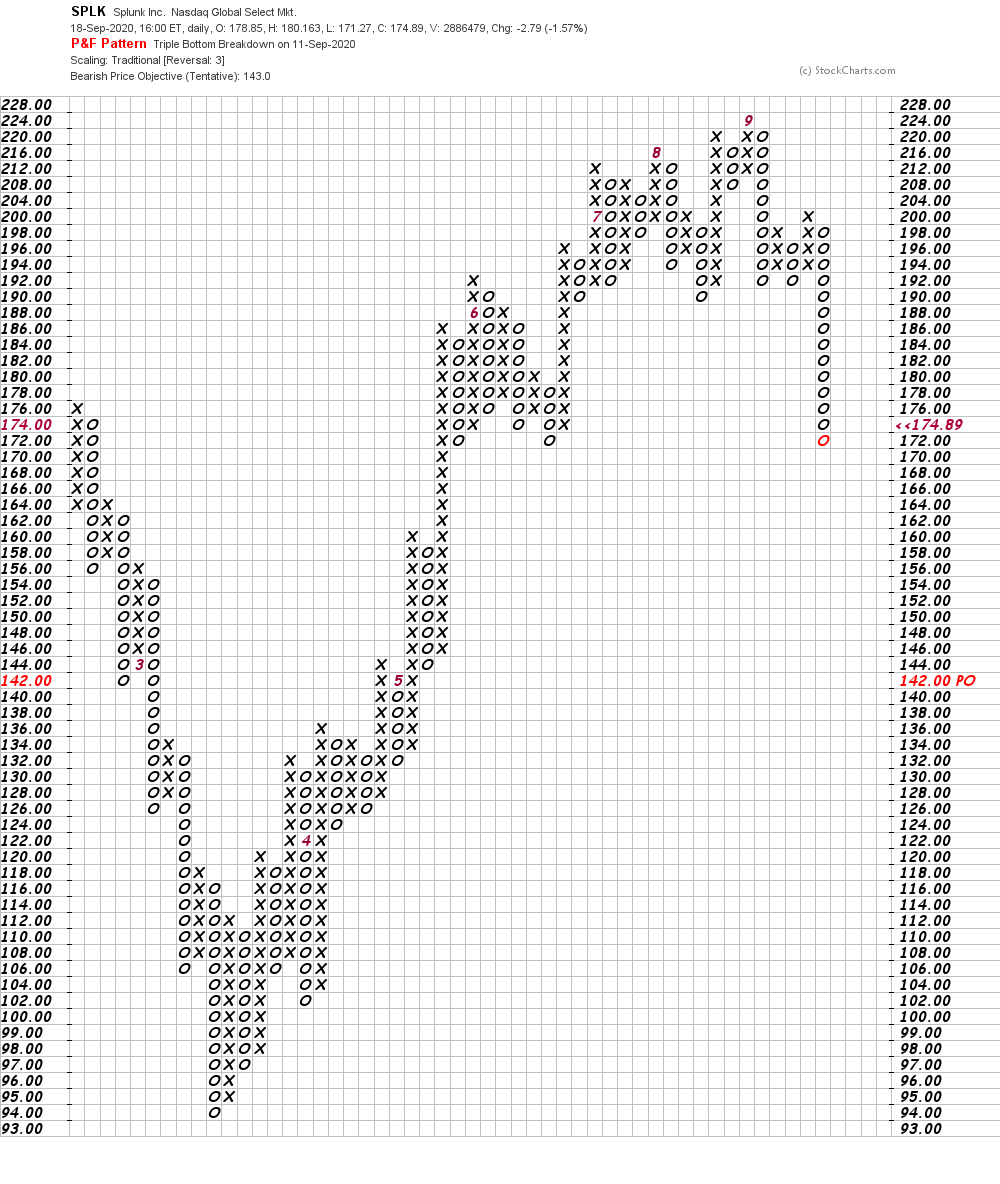 Bottom-line strategy: Traders should have been stopped out with the close below $180 unless they managed to take profits on strength in early September. The charts and indicators are weak now and SPLK could decline to the $143 area or even lower in the weeks ahead.
Get an email alert each time I write an article for Real Money. Click the "+Follow" next to my byline to this article.
TAGS: Investing | Stocks | Technical Analysis | Software & Services | Mad Money | Executive Interview