By TIMOTHY COLLINS Dec 19, 2019 | 12:30 PM EST
Stocks quotes in this article: MU, INTC
Micron Technology ( MU)  after the bell on Wednesday announced earnings of 48 cents per share on revenue of $5.14 billion. The 6% revenue growth came in ahead of expectations, while the bottom line number surpassed consensus by a penny. For the second quarter, management guided lower, based on the midpoint, both EPS and revenue. The ranges provided did encompass the current consensus estimate, but Micron would have to deliver at the top end of the range.
Based on this guidance, some investors may be questioning why the stock is higher by 4% on Thursday. The reason revolves around the fact the market is forward-looking. The company, as well as a half-dozen analysts, all noted that the second quarter should mark a bottom in the bearish cycle for Dynamic random-access memory (DRAM), and even NAND flash memory to a lesser degree. Excess inventory in the DRAM cloud space has been removed as Micron has maintained a supply chain discipline keeping supply in line with demand. This discipline has weighed on revenue growth, but helped the company accelerate the bottom, and potential cycle turn.
Real Money's Doug Kass brought up a solid point Thursday morning: "I continue to wonder -- as do other Bears -- whether there has been a lot of prebuys before Chinese tariffs."
Almost to a T, Rosenblatt Securities addressed this very argument in its upgrade and $100 price target:
"Naysayers will argue, we view reasonably, that recent demand has been artificially inflated by inventory increases in China (trade related), Intel ( INTC) CPU shortages that persist, and Micron not seeing cost reductions in NAND for a few more quarters. Our view is for investors to take advantage of those on the street who may obsess over the minutiae exact timing of the cycle recovery."
This is a perfect example of what makes a market, and it is far too early to tell who will be correct. I agree that there were likely more aggressive buying and customer inventory build, helping to remove excess inventory in the DRAM cloud space, but with cloud growing rapidly, the server market seeing little slowdown, hiccups at Intel, and 5G set for a big push, I don't know that it will matter. Add in the fact free cash flow shifted from a negative $3.5 billion to a positive $1.5 billion, and investors may have plenty of reason to be optimistic.
The biggest challenge I see for the bears is a forward-looking market. The entire world knows Q2 will be bad. What we don't know is if it will mark a bottom, but channel checks appear to confirm the clearance of excess inventory, so bulls have the upper hand for the next six to eight weeks as the bad news is baked in, but optimism remains. Until that optimism is proven incorrect, that's the forward-looking narrative, right or wrong.
In terms of the technical picture, I would not want to be short Micron based on the weekly chart. Barring a reversal below $52 before the close of trading Friday, Micron shares will have pushed above the resistance level of an ascending triangle. Secondary indicators of volume, trend, and momentum have all crossed bullish, but none are extended. What that means if Micron has clearance to at least $60 here, before I expect we'd see indicators reaching an overbought exhaustion stage. 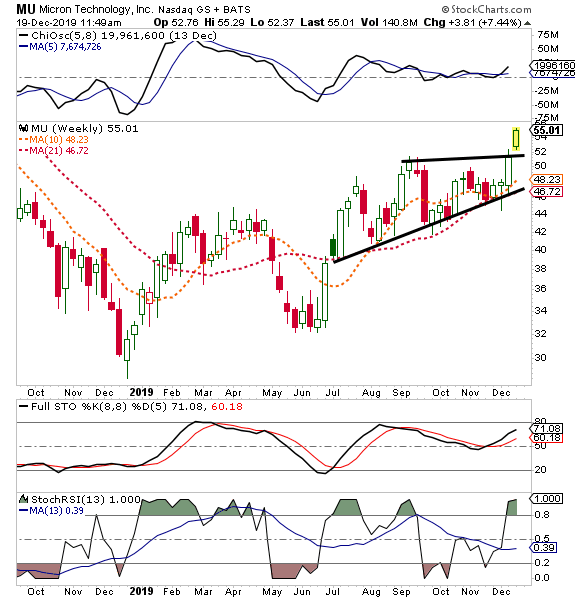 Post-earnings Micron action has flashed some reversals from time-to-time over the past two years. Half the initial moves have reversed course over the next three to five weeks while the other half continued in the same direction. Not exactly a high probability, but at least there is no specific trend working against shorts nor in favor of bulls.
Overall, I see the results, outlook, and current chart as bullish. It will likely take a market reversal to keep Micron from getting to $60, as I don't see this underperforming in a neutral or bullish market. I expect we'll see $60 before $50, barring a large market pullback.
Get an email alert each time I write an article for Real Money. Click the "+Follow" next to my byline to this article.
TAGS: Earnings | Investing | Stocks | Technology | Stock of the Day