While most of the charts are now neutral, psychology data and valuation continue to send cautionary signals.

So, as markets are higher Monday morning trading once again on positive vaccine news, the charts and data continue to suggest a more conservative stance. 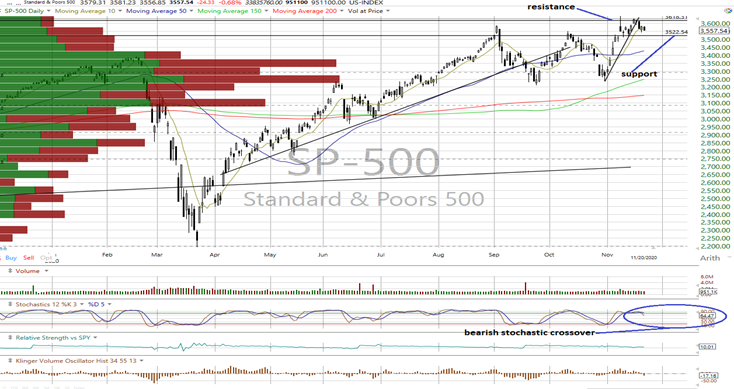 Most of the major equity indices were lower Friday with most closing at or near their intraday lows. No violations of support were registered. However, the Dow Jones Transports and Value Line Arithmetic Index closed below their near-term uptrend lines, leaving only the S&P 400 MidCap 400 Index in a near-term positive trend. All others are neutral.

Meanwhile, the S&P 500 (see above), DJIA and Dow Transports saw bearish stochastic crossover signals generated. Only the MidCap 400 and Value Line index have yet to generate such a signal.

However, the cumulative advance/decline lines for the All Exchange, NYSE and Nasdaq remain positive and above their 50-day moving averages at this stage.

Our net takeaway is the charts have been gradually weakening over the past several sessions.

The data continue to suggest some caution is warranted for the markets.

Friday's declines brought the one-day McClellan Overbought/Oversold Oscillators on the All Exchange and Nasdaq back to neutral (All Exchange: +47.05 NYSE: +46.9 Nasdaq: +46.99).

The Open Insider Buy/Sell Ratio remains in neutral territory at 27.5 but continues to be in a downtrend as the number of insider-selling transactions has been outweighing purchases over the past several sessions.

Meanwhile, the detrended Rydex Ratio (contrarian indicator) moved into very overbought levels at 1.51 as the leveraged ETF traders further extended their leveraged long exposure. We reiterate the total leverage for the Rydex is at a three-year high. Similar relative exposure occurred four times over the past three years, each of which was followed by a notable market correction.

The Detrended Rydex Ratio Is 1.51 (Bearish) 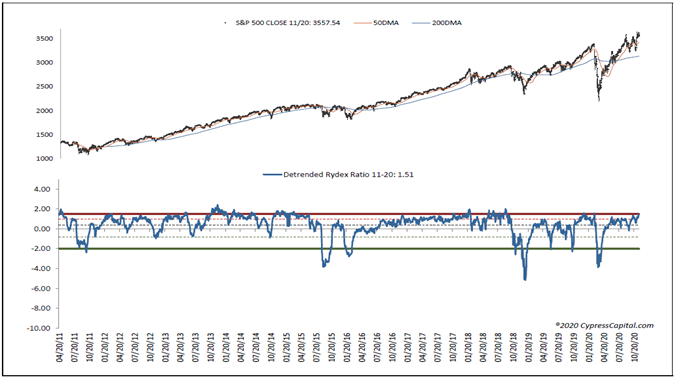 The charts, while not negative, have been undergoing a slow weakening of structure of late. Meanwhile, Rydex leverage, insider selling and valuation suggest portfolios should likely be somewhat more conservative in their construction. We remain "neutral" in our near-term outlook.