The bulk of the charts saw further deterioration Friday with several support levels being violated. However, some of the data, including valuation, has moderated while the McClellan Oscillators are suggesting a bounce.

Let's take a closer look and see what it all means.

All of the major equity indices closed lower Friday with broadly negative internals on heavy trading volumes as all closed at or near their intraday lows.

All of the indices broke below their respective support levels with the exceptions of the Nasdaq Composite (see below) and Nasdaq 100, which remain in neutral trend patterns and above their 50-day moving averages.

All of the other indices are now in near-term downtrends and below their 50 DMAs. 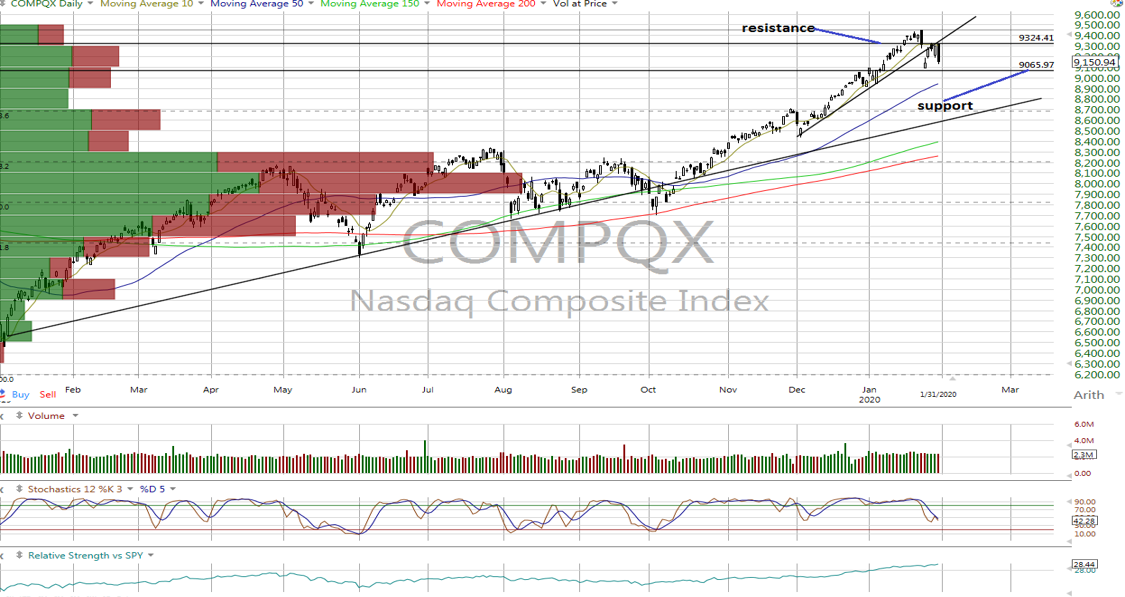 Breadth deteriorated further as well with the All Exchange, NYSE and Nasdaq cumulative advance/decline lines making lower lows and the Nasdaq A/D closing below its 50 DMA.

The VIX closed at 19.00, which is the top end of its new trading range. We do not view it as instructive at this point as it could either ease from resistance or violate to the upside. There is not enough evidence in our work to strongly support either scenario.

All of the McClellan one-day McClellan Overbought/Oversold Oscillators dropped deeper into oversold territory with the Nasdaq becoming very oversold (All Exchange:-95.34 NYSE:-92.8 Nasdaq:-100.57). Such levels suggest a pause or possible bounce from the recent weakness.

The Open Insider Buy/Sell Ratio at 43.0 remains neutral while the detrended Rydex Ratio (contrary indicator) increased its bearish implications to 1.17 as the ETF traders increased their highly leveraged long exposure.

The S&P 500 is trading at a P/E multiple of 18.3x consensus forward 12-month earnings estimates from Bloomberg of $176.32 per share, compared to the "rule of 20" fair value multiple of 18.5x, now implying the market is actually slightly undervalued.

We have now seen somewhat of a reversal as to the weighting of the evidence as the charts, which were previously supportive, have turned negative while valuation has turned from negative to slightly supportive. Nonetheless, the psychology data remains quite disconcerting. As such, we are keeping our near-term "neutral/negative" outlook in place.

Get an email alert each time I write an article for Real Money. Click the "+Follow" next to my byline to this article.
TAGS: Indexes | Investing | Markets | Stocks | Technical Analysis | Trading | VIX | U.S. Equity

The charts of the payments giant suggest there is further risk ahead, so check your cost basis and take appropriate action.

It's clear that the market infection from the Wuhan pneumonia is only just beginning.

Markets Struggle to Price in the Unknown Impact of Covid-19

Bounce buyers want to believe there is an overreaction to the virus news, but if downside momentum builds, the selling can continue much longer than many expect.

Jim Cramer: 3 Market Storylines Are In Play, But Which Is Best for Investors?

Only one of these scenarios is going to get you in and out of this market with your assets intact and your portfolio stronger.