Well that was fun! But can it last?

All the major equity indexes closed higher Tuesday near their intraday highs, and all but two indexes broke above resistance. The end of the session left all the index charts in near-term uptrends.

However, recent strength has pushed the 1-day McClellan OB/OS oscillators into overbought territory, suggesting a pause/consolidation of recent gains.

So, while Tuesday's action increased our confidence in a market recovery, we suspect some pause/consolidation is likely over the near term. 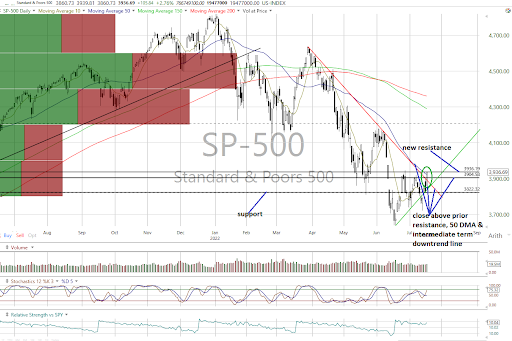 All the major equity indexes closed higher Tuesday with strong internals as all closed near their highs of the day, holding on to notable gains.

The notable gains saw all but the Nasdaq Composite and Nasdaq 100 close above resistance while all managed to rise above their 50-day moving averages.

More positive technical events were generated as the S&P 500 (see above), DJIA, and Dow Jones Transports closed above their intermediate-term downtrend lines.

As such, all the charts are now in near-term bullish trends.

Some stochastic levels are now overbought, however, but have not generated bearish crossover signals thus far.

Regarding the data, the McClellan OB/OS Oscillators are sending a caution signal as all are now overbought (All Exchange: +65.45 NYSE: +73.55 Nasdaq: +60.87). In our opinion, they suggest some near-term consolidation is likely.

The percentage of S&P 500 issues trading above their 50-day moving averages (contrarian indicator) is neutral at 44%.

The detrended Rydex Ratio (contrarian indicator) dropped to -1.78 and is now bullish versus its prior very bullish signal as the leveraged ETF traders remain leveraged short. 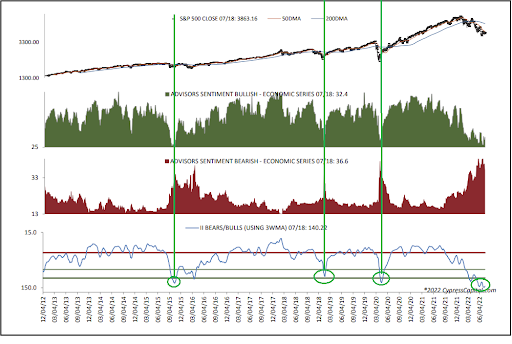 Tuesday's market action increased our confidence that the markets are recovering from the recent destruction that has transpired since the beginning of April. However, over the near term, we believe some consolidation is now likely given the McClellan OB/OS and narrowing of the S&P's forward P/E versus ballpark fair value.