While we believe some clouds may be gathering, chart conditions continue to be favorable. Indeed, the Nasdaq Composite closed above resistance and all major equity indices are in near-term uptrends.

Meanwhile, the forward valuation for the S&P 500 is becoming increasingly extended.

So, where's this market headed? 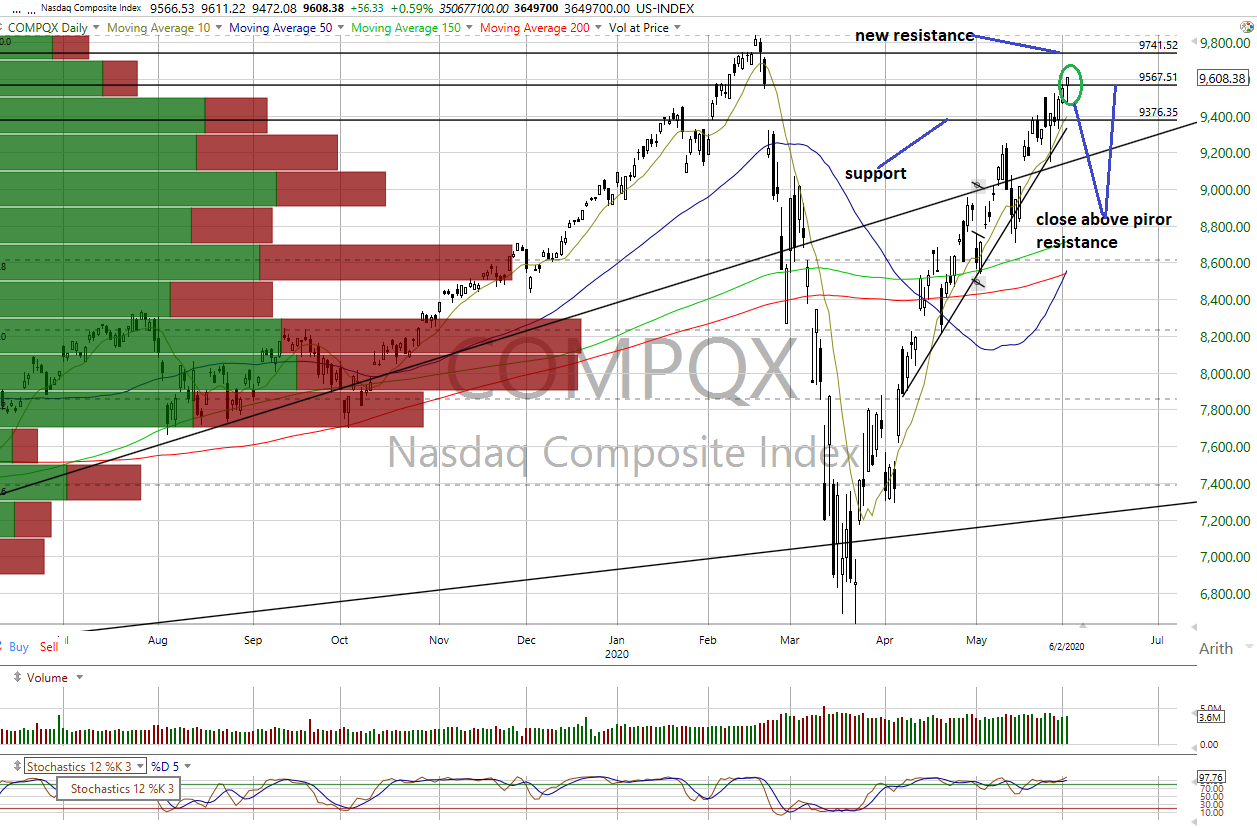 All the indices closed higher Tuesday with positive internals on heavier trading volumes. All closed at or near their intraday highs as demand persisted up to the close.

The Nasdaq Composite (see above) was the one technical event of note as it closed above its resistance level.

All the index charts remain in near-term uptrends and above their 50-day moving averages as are the cumulative advance/decline lines for the All Exchange, NYSE and Nasdaq.

Stochastic levels remain overbought but have not yielded bearish crossover signals to date.

As such, we have yet to see any cautionary sell signals appear from a chart perspective.

On the other hand, the data have turned a bit more cautionary.

All the one-day McClellan Overbought/Oversold oscillators are now overbought with the NYSE's extremely so (All Exchange: +79.49 NYSE: +113.28 Nasdaq: +50.37). They are, in our opinion, suggesting a potential pause or partial retracement of recent progress.

However, the Open Insider Buy/Sell Ratio remains neutral at 35.6.

On the other hand, the detrended Rydex Ratio (contrary indicator) at +0.82 has slipped into mildly bearish territory as the leveraged ETF traders increase their leveraged long exposure. While not at extreme levels, it does give a slight tilt to the cautionary side of the scales.

This week's AAII Bear/Bull Ratio (contrary indicators) at 45.92/28.46 still finds the "crowd" remaining skeptical of the markets despite the dramatic market gains from the March lows.

The cautionary signal coming from the counterintuitive percentage of S&P 500 issues trading above their 50-day moving averages remains bearish at 95.5%.

Valuation continues to appear extended with the S&P 500 trading at 23.9x consensus forward 12-month earnings estimates from Bloomberg of $128.94 per share as the "rule of 20" finds fair value at a multiple of 19.3x.

Of possible note is forward estimates rising twice in the past four days. They had been going down daily over the past two months.

We are maintaining our near-term "neutral/positive" outlook for the major equity indices largely due to chart conditions while the data have become less encouraging and valuations appear stretched.