Apple Inc.'s (AAPL) steep slide into the New Year is having far-reaching effects on the broader market, as one would expect from one of the most widely held stocks in the world.

To put the company's long-term slide into context, it has essentially lost one Berkshire Hathaway (BRK.A) (BRK.B) off it its market cap since its peak in the fall.

Refer to the chart below for the size of Apple's market cap cut since its peak against the market cap of some of America's largest companies. 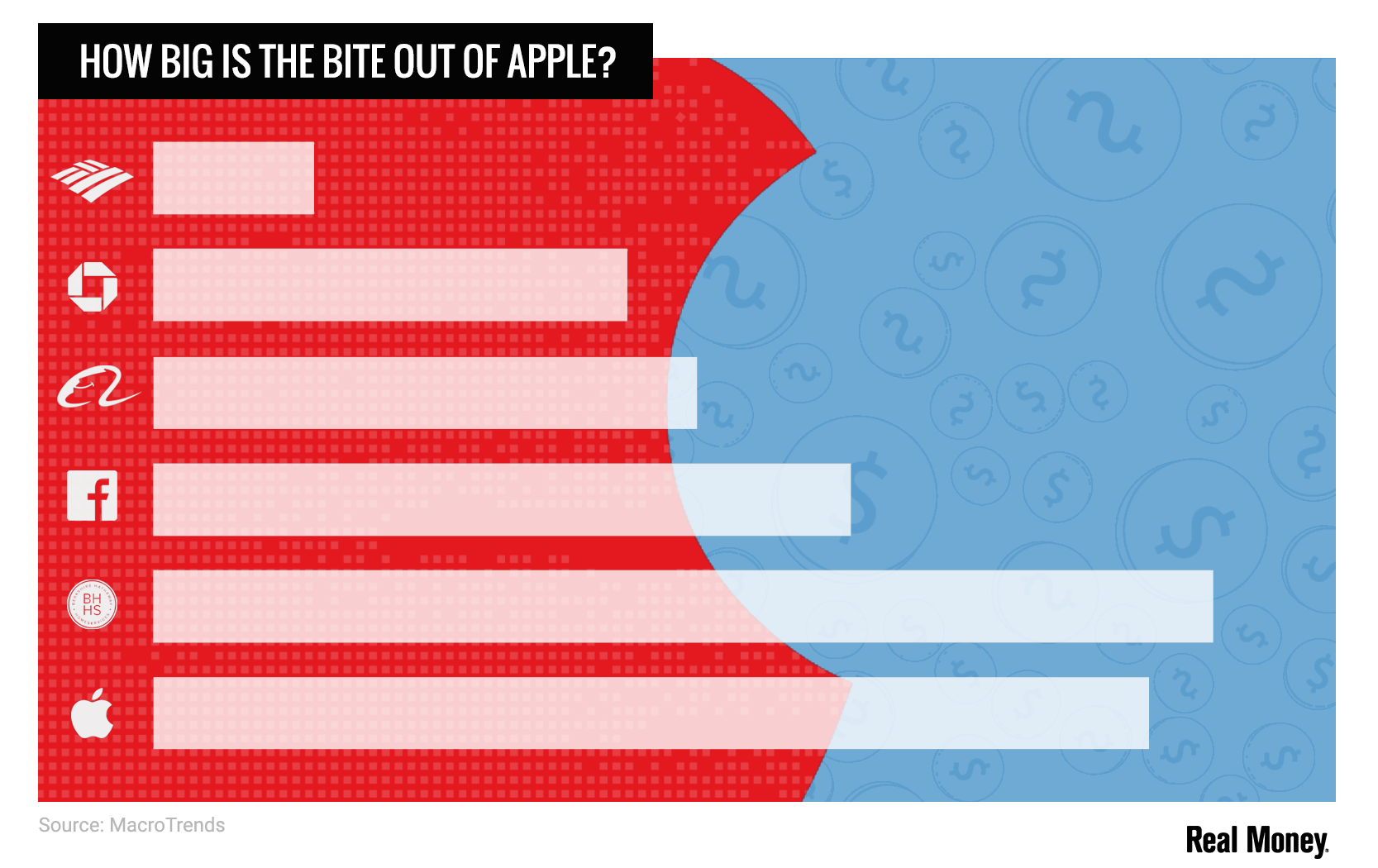 However, the effect has not been even across industries or stocks. As such, separating the winners from the losers will be key to identify even for those avoiding Apple altogether.

One obvious winner given Tim Cook's lamentation of Apple's performance in China would be its chief Chinese competitor: Huawei.

"Top of the list for me would be Huawei," D.A. Davidson analyst Tom Forte told Real Money. "The Chinese consumers are voting with their wallets and that will move to Huawei."

He added that the patriotic sentiment of consumers in China that is motivating them to avoid the higher prices of comparable Apple products.

The confluence of betting with your nation and your wallet is a hard combination to beat for Huawei.

5/ Another reason: the rise of HOV (Huawei OPPO & vivo) in China.

Huawei's performance has been phenomenal in China. Mate Series is a serious alternative to premium iPhones & a de-facto business phone, especially among males.

Look at this @Huawei vs @Apple fight in China: pic.twitter.com/ETDpnrxnvF

Samsung (SSNLF) could be a secondary beneficiary of the trade battle that is impacting Apple.

As far as phones, the South Korean smartphone and semiconductor company could benefit from its lower price point on phones.

However, the company is barely exposed to the Chinese market, with less than 1% of its overall mobile phone sales coming from China, according to Daniel Yoo, head of global strategy and research at South Korea-based Kiwoom Securities.

Instead, the impact of the trade war that Apple cited as a primary problem pushing sales numbers downward actually plays to Samsung's advantage in terms of its semiconductor production.

Samsung does generate about 15.5% of its overall revenue from mainland China according to FactSet, largely from its semiconductor segment.

If the pressure on the Chinese economy is as big as Apple and its suppliers suggest, Samsung's dominance in East Asian markets could persist as China's "Made in China 2025" plan stalls.

Score one for playing tough.

The former Apple supplier and more recent legal foe was quite pleased to kick Apple in the ribs with the enforcement of an iPhone sales ban in Germany, just weeks after a ruling in China added to issues for Apple in the East Asian market.

To be sure, Qualcomm (QCOM) shares also declined on Thursday, but this is likely a consequence of pressure on the overall semiconductor sector than anything else.

Essentially, the more pressure on Apple, the more likely a desirable resolution for Qualcomm can be reached. Right now, the heat is on high.

Between Kraft Heinz (KHC) and Apple, Warren Buffett has been a perfect exemplar of just how difficult stock picking is in a market like this.

Berkshire Hathaway's roughly 5.3% stake in the Tim Cook's tech giant has lost nearly $4 billion on Thursday, based on Berkshire's reported holdings as of Sept. 30. Berkshire owns about 252 million shares of Apple, which was worth about $39.8 billion prior to Apple's revenue warning on late Wednesday afternoon.

Shares of his company are feeling the blow, sagging over 5.6% in their own right on Thursday.

The pain that Buffett is being dealt is mild in comparison to the havoc that Apple's forecast is wreaking on the semiconductor sector and its suppliers more specifically.

However, the impact was further reaching and worked to drag down a number of semiconductor indices and impacted even semiconductor companies without exposure to Apple.

Nvidia (NVDA) , for example, despite virtually no relationship with Apple, declined nearly 6% on the day.

Companies with High Exposure to China

The fear over patriotic reprisals from Chinese consumers amid the ongoing trade war is spreading as well, as a company like Starbucks (SBUX) is sliding significantly based on its own tussle with domestic Chinese challenges.

Luckin is leveraging a discounting model amid an economic slowdown as well as its identity as a Chinese run company to compete with Starbucks.

The site states that two-for-three and five-for-ten coffee deals are standard and at least through 2018, all food is half price. The heavy discounting is made possible by the company founder Jenny Qian Zhiya's deep pockets from her UCAR ride hailing business.

The combination of factors is a toxic brew for the stock and is helping push shares down nearly 5% on Thursday as China comes into focus.

Estimates may have been reined in significantly on the day as news of the forecast issues rolled in, but they appear too little, too late for many onlookers.

For reference, as Apple hit its initial decline, analysts nearly across the board pounded the table to buy more shares and not one sell rating was issued, save for that of Pierre Ferragu at New Street Research.

Headed into Apple's fourth quarter fall, the FactSet consensus followed along with the stock's trend quite closely, marking no more than $20 north of the stock price into October.

By November, the consensus was $60 per share above the share price, consistently coming apart from the trend in the stock.

Many analysts following the stock will need to regain market confidence with their revised estimates.

As one of the most widely held stocks in the world, it should come as little surprise that the market overall is taking a hit.

A 10% drop in Apple shares have dropped on the market's head and promoted a 660 point slide in the Dow.