"The wholesale disruption of American health care being discussed in some of these proposals would surely jeopardize the relationship people have with their doctors, destabilize the nation's health system, and limit the ability of clinicians to practice medicine at their best," CEO David Wichmann said on Tuesday morning. "The inherent cost burden would surely have a severe impact on the economy and jobs, all without fundamentally increasing access to care."

Shares of the healthcare giant have slumped on earnings day as the political risks have outweighed a solid print. However, it isn't the only sickly stock in its sector as the implications of the risks reverberate. CVS Health (CVS) , Humana (HUM) , Centene (CNC) , Cigna (CI) , WellCare (WCG) , and Anthem (ANTM)  , among others, have been among the market's largest decliners. The S&P Managed Healthcare Index was down over 6% two hours from close. 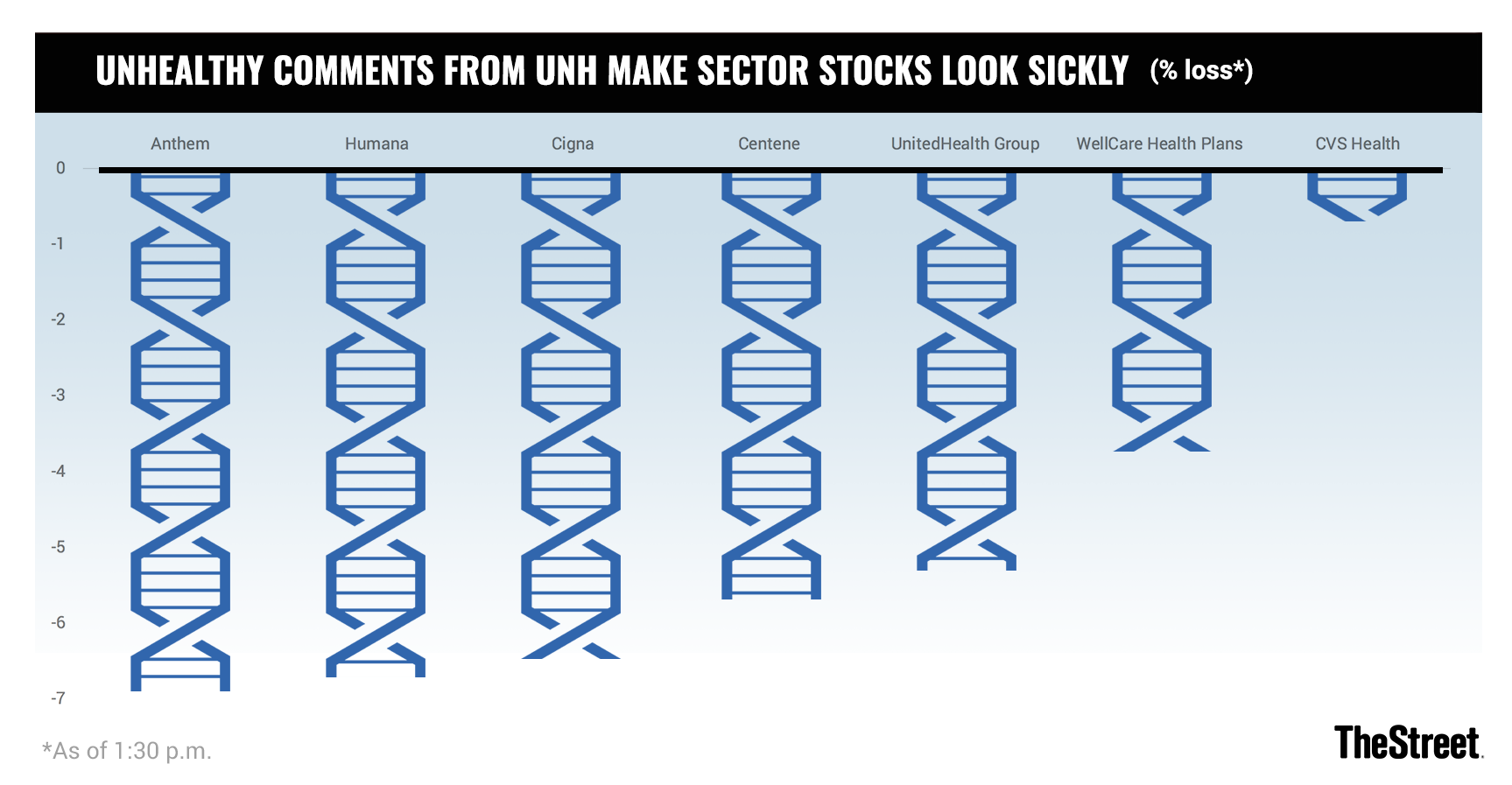 The issue appears to be that by confronting the issue and citing its pitfalls, UNH management inadvertently gave the government option a great deal of free press.

"While earnings fundamentals for the MCO group remain strong, the Medicare-for-All overhang remains the dominant narrative," Evercore ISI analyst Michael Newshel lamented. "[UNH] stock's rebound on this morning's beat & raise was very short-lived, and the whole group turned over before the conference call concluded. Management faced a bit of a catch-22 on engaging Democrat's Medicare-for-All proposals on the call; they gave the right critique on system disruption and alternatives to universal coverage, but the attention itself elevates the issue in a sensitive market."

The attention has emboldened the "Medicare for All" plan's biggest proponents on Tuesday as well. Most notable of the presidential candidates calling for the program that concerns companies like UNH was Bernie Sanders.

Raise your hand if you're sick and tired of your private health insurance company. We need Medicare for All. #BernieTownHall pic.twitter.com/3euHRCjqn9

Big surprise: the Trump administration is lying about Medicare for All to protect insurance industry profits. We debunked a few of their outrageous myths: pic.twitter.com/s6pBc9hS2k

2020 candidate Cory Booker promised a similar platform to the one furthered by Sanders.

Sen. @CoryBooker: "I will fight for Medicare for All and I will start with lowering the age of Medicare eligibility and giving Americans a real public option." https://t.co/1WFIBV32oZ pic.twitter.com/QnfbUJIngO

Of course, the progressive wing of the Democratic party headlined by Alexandria Ocasio-Cortez has also been pushing hard for a single-payer healthcare option, in strong opposition to the Trump administration that has set about dismantling Obamacare. That angle has recently gained support from long-standing representatives as well.

Healthcare is a right, not a privilege. 9 years ago, we passed the #ACA to ensure every American has access to healthcare.

I'm proud to cosponsor the #MedicareforAll Act to further our efforts. No deductibles, no co-pays. Just quality healthcare for every single American. #M4A

The market appears to be worried that if these lawmakers get their wish, the insurers will be the first, and the hardest hit. With an election only about 18 months away, it will be a major issue for insurers and their investors to keep an eye on.

Get an email alert each time I write an article for Real Money. Click the "+Follow" next to my byline to this article.
TAGS: Regulation | Indexes | Investing | Markets | Politics | Stocks | Healthcare | Pharmaceuticals | U.S. Equity | Stock of the Day