The so called "cloud kings" have not been the jewel of many portfolios into the year end.

However, as the market has encountered a bit of volatility and tech stocks began to falter overall, many of these cloud companies have outpaced the market on the way down as well. 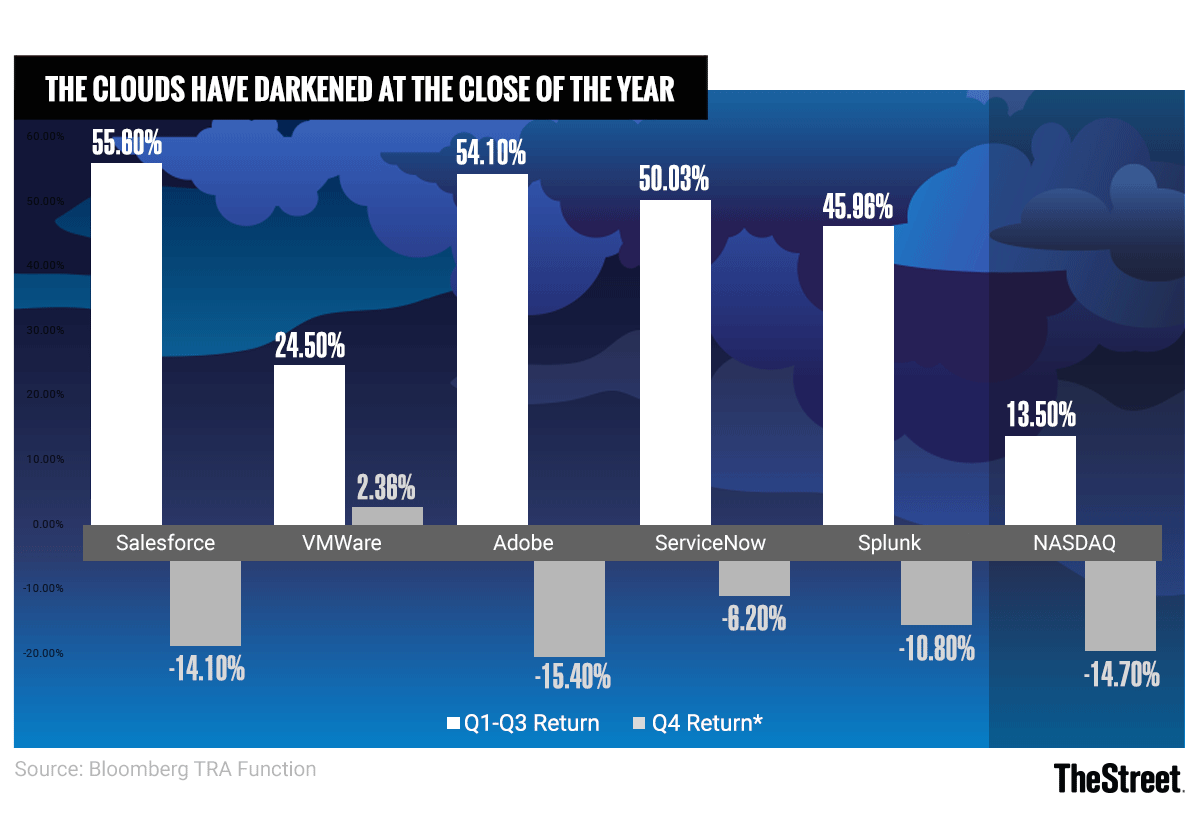 Even the companies that did not turn downward in the fourth quarter slowed down quite a bit. For example, VMWare posted a 24.5% gain in the first three quarters, almost doubling the return of the broader NASDAQ. Amid the NASDAQ's fall, the stock has only managed to hang out to a gain of just over 2% amid talk of a deal with soon to be public again Dell.

Outliers from the "Cloud Kings", so coined by Action Alerts Plus portfolio manager Jim Cramer, were Workday (WDAY) and Red Hat (RHT) .

Red Hat has seen a positive fourth quarter largely due to its $34 billion blockbuster acquisition by International Business Machines (IBM) . Meanwhile, Workday surged after a strong earnings in November and analyst speculation that it could be an acquisition target for Alphabet (GOOGL) .

So, while the clouds have not faded from the sky, they have certainly darkened as the broader market has become tempestuous.

Given the large scale surge each company had early in the year, investors are still aloft.

Yet, as Adobe demonstrated with its 7.29% drop on Thursday even after a largely positive earnings release, there may be room to fall before a perfect entry point presents itself on these stocks.

Get an email alert each time I write an article for Real Money. Click the "+Follow" next to my byline to this article.
TAGS: Earnings | Indexes | Investing | Stocks | Bearish Bet | Software & Services | Technology | China | United States | U.S. Equity | Stock of the Day

Uranium ETFs Are Starting to Glow, but Which Ones Are 'Green'?

What Strategy Should We Have for Snowflake?

With earnings due out Wednesday, here's what I'd do.

Dollar Tree Retreats on Fundamental Downgrade, but What Do the Charts Say?

Let's check out the latest technical indicators on DLTR stock

There's a Lack of Buying Interest, Rather Than Strong Selling Pressure