With Johnson & Johnson (JNJ) bearing the brunt of the newsbreaks on opioid litigation, the data on where to point the finger is much murkier.

Shares of the New Jersey-based drug manufacturer have moved upward after the landmark decision in Oklahoma, not only because of the company's noted ability to withstand such a penalty in contrast to opioid-exposed peers, but its vehement defense on culpability.

A company statement notes that the its opiate drugs have accounted for less than 1% of total opioid prescriptions in Oklahoma, as well as the United States, far below peers like OxyContin maker Purdue Pharma, Mallinckrodt (MNK) , and Allergan's (AGN) Actavis unit. 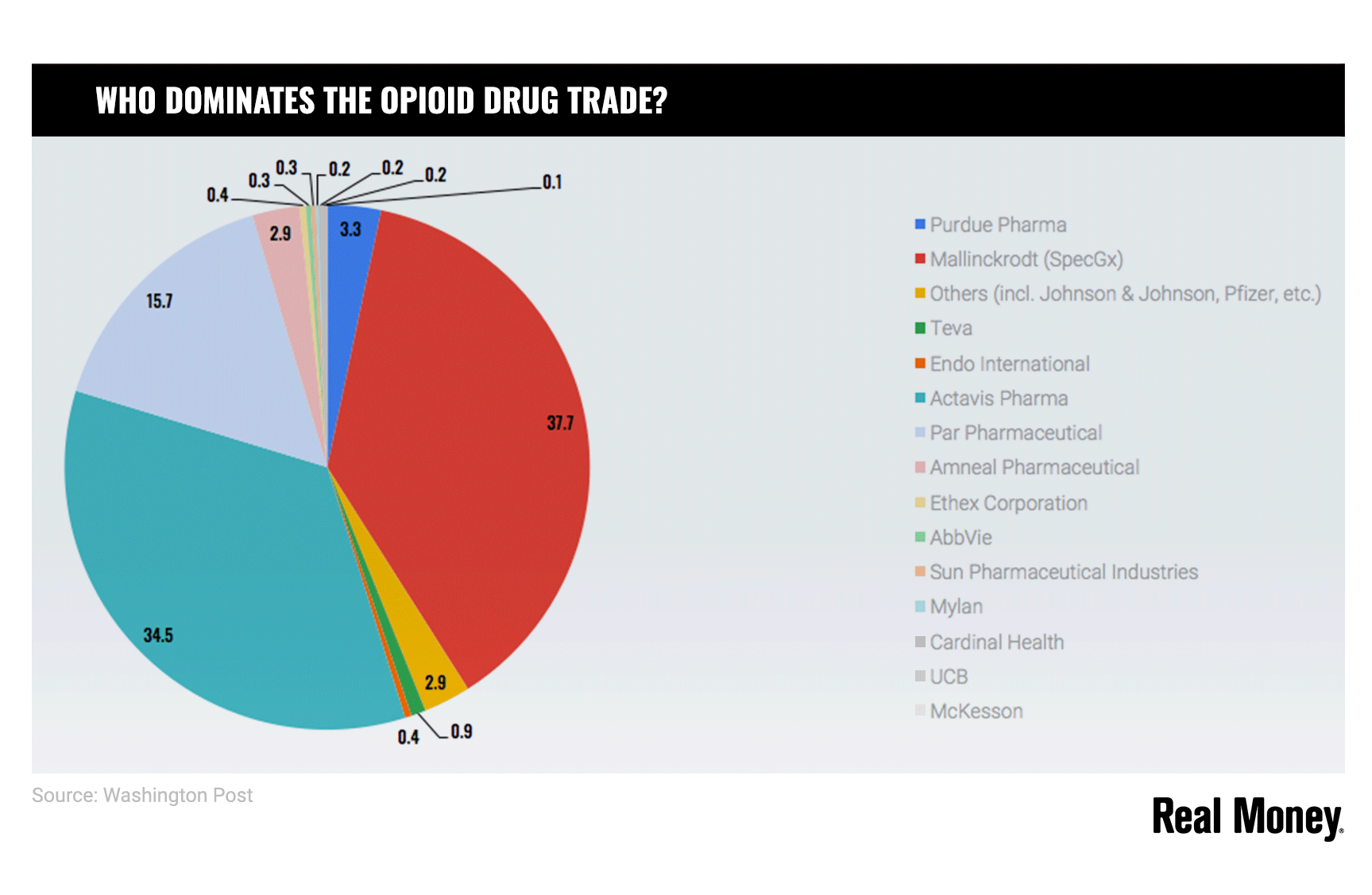 "Janssen did not cause the opioid crisis in Oklahoma, and neither the facts nor the law support this outcome," said Michael Ullmann, executive vice president and general counsel for Johnson & Johnson. "We recognize the opioid crisis is a tremendously complex public health issue and we have deep sympathy for everyone affected. We are working with partners to find ways to help those in need."

He added that the company will continue to appeal the decision in light of the oversight, which may be encouraging for investors expecting a successful final ruling.

But even small players in the opioid space may get little sympathy given the monumental human cost of the drug epidemic and the profits raked by manufacturers as the problem grew.

According to the Centers for Disease Control and Prevention, the amount of opioids prescribed to patients began to grow precisely in tandem with overdoses and deaths in the past two decades.

The report notes that statistics on pain sufferers have not moved significantly, indicating a trend of overprescription.

While this does shift some blame to distributors and physicians, the aggressive marketing of pharmaceutical companies is clearly within the crosshairs of legislators and prosecutors.

While settlements have been reached with Teva (TEVA)  and Purdue Pharma in Oklahoma already, and the Johnson & Johnson promises to appeal its ruling, the less-than-harmful market reaction may incline litigation to be even more aggressive in the wake of the human cost. 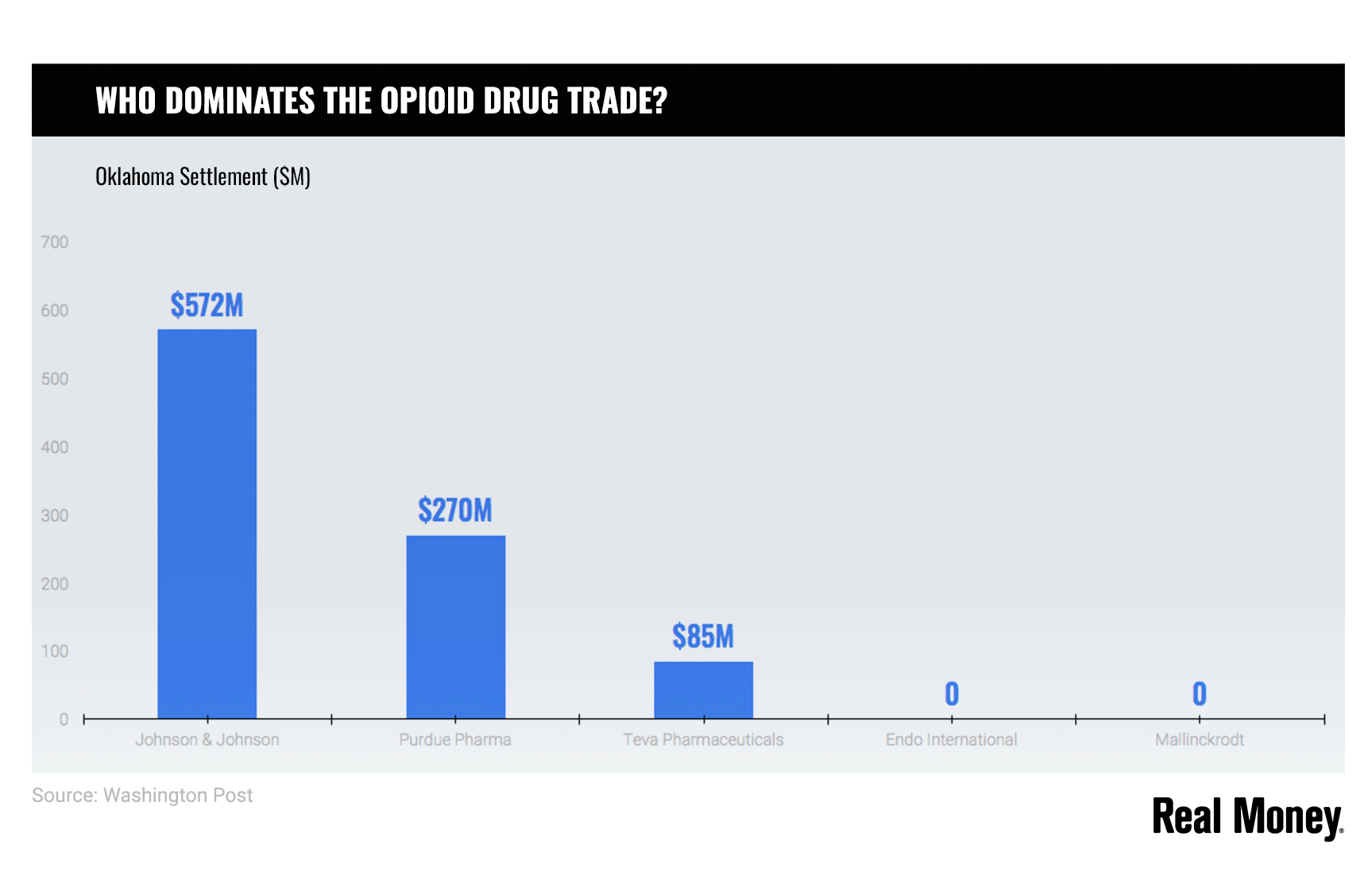 That is particularly troublesome for Mallinckrodt and Endo International (ENDP) , which still have litigation to deal with, adding to the further state and federal suits upcoming for every company operating in the space.

How to Kill the Pain?

No company is necessarily safe from the litigation risk tied to the national health concern, but Johnson & Johnson may be one of the very the few basically guaranteed to survive.

In fact, many companies seeing shares plummet on the potentially larger load they could bear after Johnson & Johnson's sizable penalty are already considering drastic options.

"Due to the already enormous amount of litigation and increased regulatory scrutiny by federal and state agencies, it is likely that these companies will experience significant impacts to their profits and operational costs," Kirk Burkley, Managing Partner at Bernstein-Burkley law firm said. "The crisis is likely to force certain pharmaceutical companies into insolvency."

He noted that privately held Purdue Pharma has already hired restructuring consultants in light of lost sales and rising legal costs. Chapter 11, in the end, could be the best defense.

"Purdue Pharma is not alone in considering bankruptcy as a strategy in the face of mounting legal fees and costs associated with actions brought as a result of the opioid crisis," Burkley added.

He named Insys Therapeutics (INSYQ) as another company at high risk as it treads at a serious low valuation, while Egalet Corporation (ZCOR) has already gone under due to the legal burden.

Teva Pharmaceuticals, which has seen debt climb and shares fall nearly 90% in the past five years, and Mallinckrodt, which has seen its long term debt climb to over $5 billion while its market cap dropped by billions, might not be far behind.

With a major case in Ohio coming up later this year, it will be important for those holding the bag on the most exposed companies, and even those less exposed, not to lose sight of the severe consequences that could be ahead.

"If we try the Ohio case, if we win a verdict against these manufacturers and distributors there, it could bankrupt them. It'd put them out of business," Mike Moore, the lawyer who led major lawsuits against tobacco giants in the 1990s and is currently spearheading the opioid lawsuits told "60 Minutes" on Sunday. "When a jury hears the evidence in this case, they're not gonna award just a couple hundred million dollars. It may be $100 billion. And whoever amongst these companies thinks they can stand up to that? Good luck."

JNJ is a holding in Jim Cramer's Action Alerts PLUS member club.

Get an email alert each time I write an article for Real Money. Click the "+Follow" next to my byline to this article.
TAGS: Bankruptcy | Corporate Governance | Regulation | Restructuring | Litigation | Investing | Stocks | Healthcare | Pharmaceuticals | Stock of the Day