Tesla  (TSLA) could be in need of capital soon, but the electric-car maker's bearish delivery figures could act as a barrier for many creditors capable of offering a lifeline.

The electric and autonomous automaker's stock ran into trouble Thursday, with billionaire founder and CEO Elon Musk heading to court, and Tesla's numbers failing to live up to expectations. Shares fell nearly 10% at the open and have remained depressed throughout Thursday trading.

Adding to the pessimism over the day's stock reaction, the potential for a cash raise is now coming more clearly into the picture, pressuring shareholders.

"While we and many on the Street were expecting a soft quarter and believe profitability will return to Tesla starting in the 2H with 2Q profitability at this point still a wild card depending on the demand/ cost cutting trajectory at the company, last night's news puts another near-term overhang over the name," Wedbush analyst Daniel Ives said. "We also believe the chances of a capital raise in the $2 billion/$3 billion arena now go from 30%-35% odds to 50%-55% given the current cash situation and lower profitability trajectory going forward."

A capital raise has been an idea floated by analysts for many months as the company continues to burn cash, but Musk has so far turned a deaf ear.

"I have a hard time modeling them not needing cash," Cowen analyst Jeffrey Osborne said late in 2018. "As we look at the profitability profile of the company, coupled with cash burn the company has with all their expenditures and growth initiatives, as well as debt coming due over the next year, our view is they'll have to raise capital in some way, shape or form." 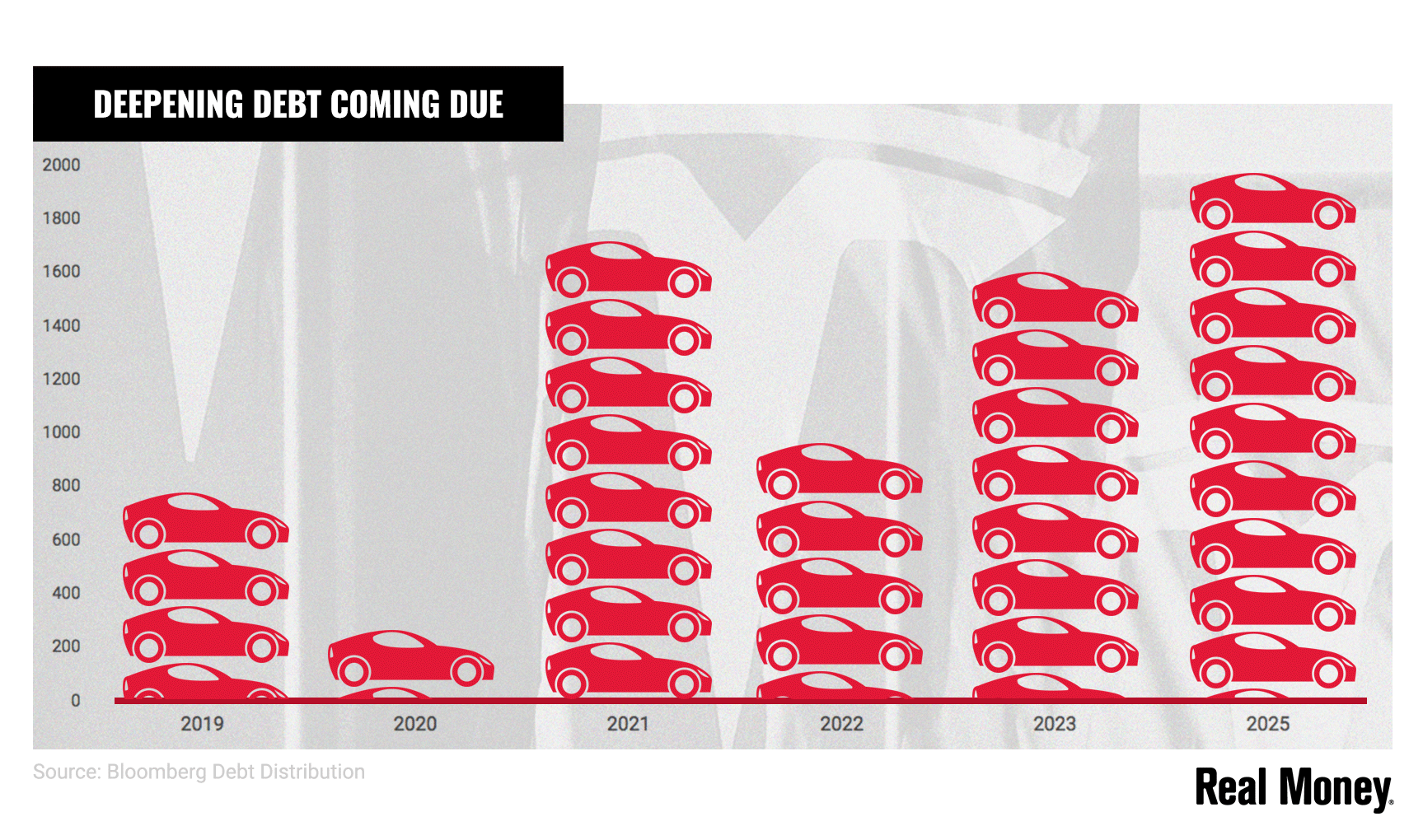 At the time, Tesla may have been in a much better position to raise the necessary capital than now.

In an interview with Bloomberg on Thursday morning, Osborne said Tesla's cash burn rate, touted at over $7,000 per minute last year, is a "ticking time bomb" for the company. The debt pile is certainly a concerning factor given the cash position the company called "sufficient", but declined to disclose.

"While TSLA mentioned it has sufficient cash on hand, we believe given the lower sales, lower anticipated margins, and negative working capital, we estimate a potential negative FCF in 1Q and for the year," Needham analyst Rajvindra Gill argued, contradicting the company. "We are also assuming TSLA will be forced to raise $1.6 billion of capital, either through equity or debt. Given the unfavorable capital structure, the interest rates would be significantly higher - another factor limiting earnings."

Given the unfavorable conditions, the ideal window for Tesla to raise cash may be closing now. Headline risks surrounding Tesla's CEO abound, while concerns mount about the cash needed to build out the company's new Chinese Gigafactory, and anxiety over possible action from crediting agencies.

"Our current first quarter free cash flow forecast is negative $0.9bn and a quarter-end gross cash position of $1.9bn," Morgan Stanley analyst Adam Jonas forecast. "While there are any number of moving pieces in working capital and ABL borrowing, we believe [Wednesday night's] delivery announcement could, by itself, be worth a further several hundred million of cash consumption in the quarter."

To be sure, there are some positive factors in play that could alleviate such anxiety.

"Similar to the phenomenon with the Model 3 unveil in March 2016, this could result in a less than obvious (and free) capital raise for TSLA, depending on the level of consumer interest (early Model 3 reservations resulted in a ~$400mm cash inflow in 2016)," Bank of America analyst John Murphy said. "On top of the recent ~$500mm loan from local Chinese banks to help fund construction of Gigafactory Shanghai, this could buy TSLA time before returning to the (public) capital markets. Notably, despite the lower than expected 1Q deliveries, TSLA noted it still ended 1Q with 'sufficient cash on hand.'"

Musk has been a master at raising cash, and has built a cult-like following around his "genius" status. Further, Tesla is not saddled with pension benefits and longer-term liabilities that have proven a big burden to auto industry peers.

Yet, the longer the problems about capital positioning persist, the harder it will become for Musk's magic to continually keep the company running on schedule. Especially if U.S. District Judge Alison Nathan puts Musk's role at Tesla in question.

For more on the expectations for his hearing this afternoon, stay tuned for a breakdown of the judge's past decisions upcoming on Real Money.

Get an email alert each time I write an article for Real Money. Click the "+Follow" next to my byline to this article.
TAGS: Litigation | Investing | Stocks | Bearish Bet | Automobile Components | Automotive | Technology | Analyst Actions | Stock of the Day | Elon Musk

Two trades I'm making (and one on my radar) as a I stay focused on the price action.