Canopy Growth (CGC) is being touted as the necessary kick to light up Constellation Brands (STZ) stock, but question marks still loom large for many.

For Thursday's trading, the two are complementing each other to solid gains, with Canopy surging about 10% and Constellation rising about 5%.

However, given the long term nature of the company's forecasts in the space and the remaining roadblocks to growth, the short term risks of the pricey cannabis push cannot be ignored.

"While we do think that valuation can move closer to historical averages over-time, we think uncertainty around Canopy Growth will likely weigh on the multiple for some time," JP Morgan analyst Andrea Teixera commented.

Too Much Too Soon?

Foremost among the concerns is the Canadian cannabis company's eye popping price tag.

The big bet from Constellation is one that pales in comparison to peers and has caused many to question whether the company dove into the deep end too quickly.

"Recently, AB InBev announced a strategic partnership with Tilray to research nonalcohol beverages containing CBD and THC. The partnership is limited to Canada with any decisions regarding commercialization of the beverages to be made in the future," said Guggenheim analyst Laurent Grandet. "This partnership further emphasizes our view that gaining access in the cannabis industry can be done for far cheaper than the $4.2B that Constellation Brands invested in Canopy earlier this year." 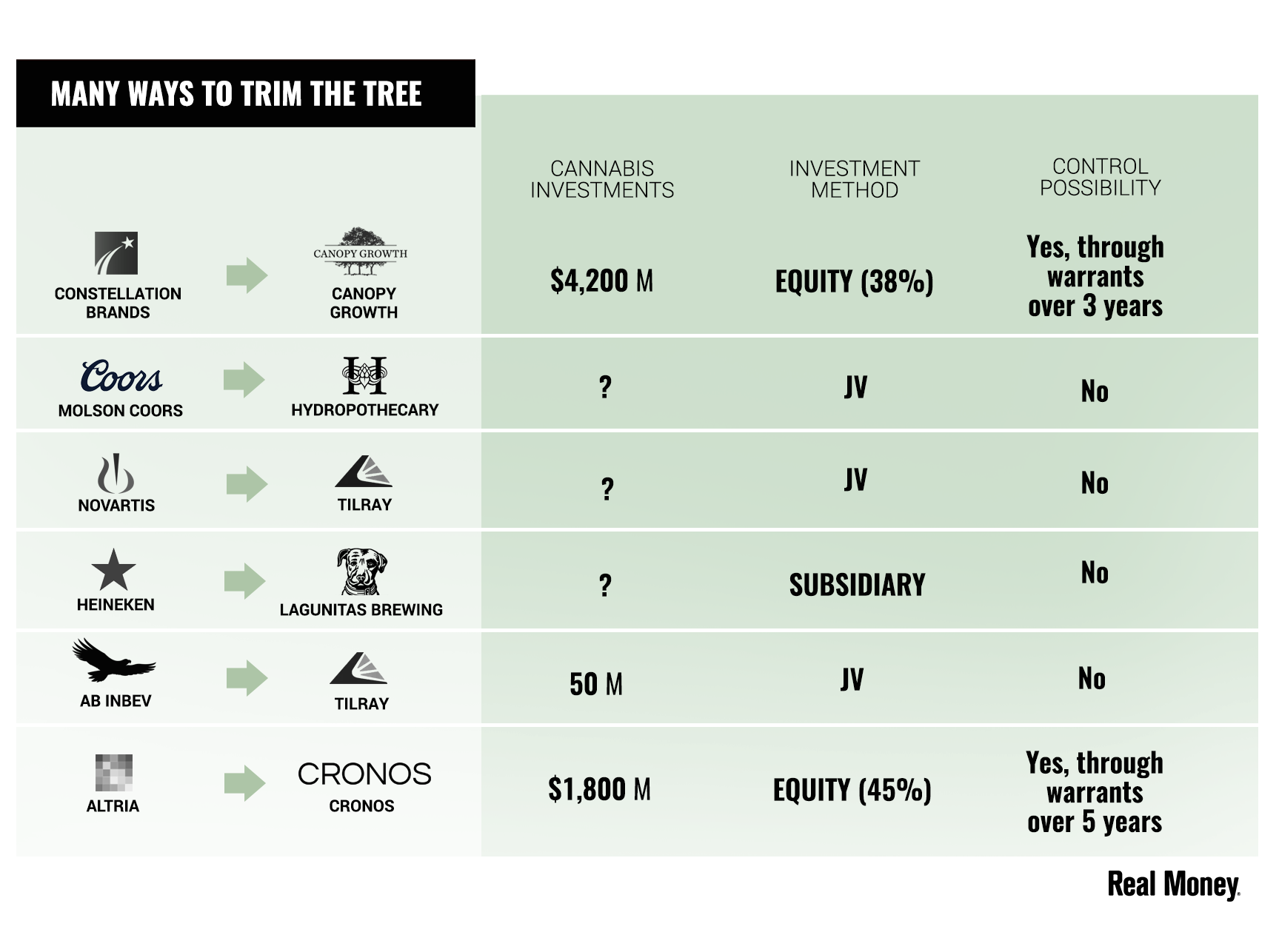 The numbers comparison on the two companies carries over to contrasting methods, with many companies forming subsidiaries to do cannabis beverage research or to form joint ventures at lower cost levels.

Most notable were the ventures started by Molson Coors (TAP) alongside Hydropothecary Corp.  (HYYDF) and Heineken's (HEINY) usage of its Lagunitas subsidiary to market a "Hi-Fi Hops" cannabis infused beer.

The only comparable investment is the $1.8 billion by Altria Group (MO) in Cronos Group (CRON) to take a 45% stake in the Canadian cannabis company. Even still, that is a far lower investment than Constellation paid.

Even big pharma companies that are certainly not shy about investing in M&A, are not jumping in with investments nearing Constellation's big bet. Novartis' (NVS) agreement with Tilray (TLRY) , for example, is not causing any known debt drag on the company.

While Constellation has touted its ability to return capital to shareholders even with the impact of its Canopy investment, the short term sting of such a large cash expenditure is still reverberating.

Further, the increased big name competition is one that could squeeze the entire industry.

Hedge Fund manager Jeffrey Vinik made that point on CNBC on Thursday, arguing that the crowded space offers little opportunity even to big names like Canopy.

"I won't say zero, but my guess is that they're overhyped," Vinik said. "There's going to be too much competition, margins are going to come down, [and] nobody's going to make money."

The potential growth engine that cannabis presents as the recreational market looks ready to open up could be worth hundreds of billions of dollars. Canopy Growth, as one of the best run and most well-funded companies in the space, would be a key company to target in the space.

Still, one should not take the catalysts alone and ignore the unanswered questions as they relate to Constellation Brands' specific investment and the volatile nature of the cannabis market.

Canopy could be the key to differentiating Constellation from its peers and vindicate CEO Rob Sand's bet. But given the developing nature of the cannabis industry, investors will need to exercise some patience before they find out whether or not returns can grow like  weed.

Read Part 1 of this article, here.

Get an email alert each time I write an article for Real Money. Click the "+Follow" next to my byline to this article.
TAGS: Investing | Stocks | Food & Drink | Canada | Cannabis | Stock of the Day