The pharmaceutical and consumer packaged good provider fell another 2.9% during Monday's trading, building on a 10% dip on Friday that has cut the company's market cap by about $50 billion in a matter of days. 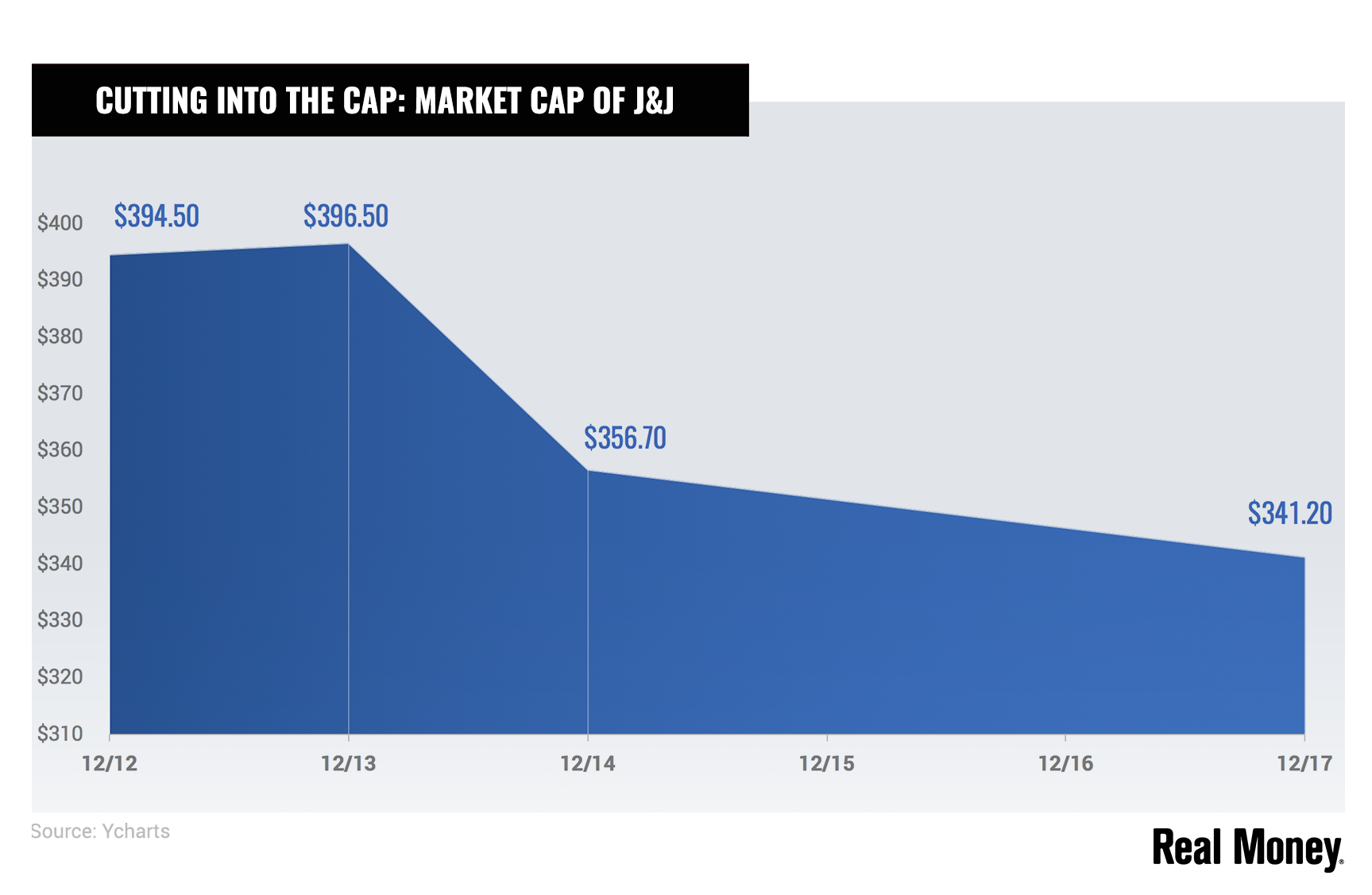 The plummeting share price was motivated by a Reuters investigation that accused the company of covering up the company's peddling of potentially cancerous talcum powder products for decades.

Yet, questions remain about where the truth lies between massive conspiracy and a blameless corporation.

"Reuters claims this goes all back to the 1970s, possibly even the 1950s. If that's true, then that means the level of fraud, conspiracy, and/or incompetence reaches levels never before experienced in human history. I find it hard to believe," Real Money contributor Tim Collins wrote in his column this morning. "Even more difficult to believe is the selloff."

To be sure, the stock still has an extremely high headline risk as the possibility of an unraveling conspiracy uncovered by Reuters weighs on the mind of investors.

The controversy carries over to the courtroom as well.

The company is confronting nearly 12,000 plaintiffs at present and the litigation cost only stands to increase as the company attracts attention through the press. 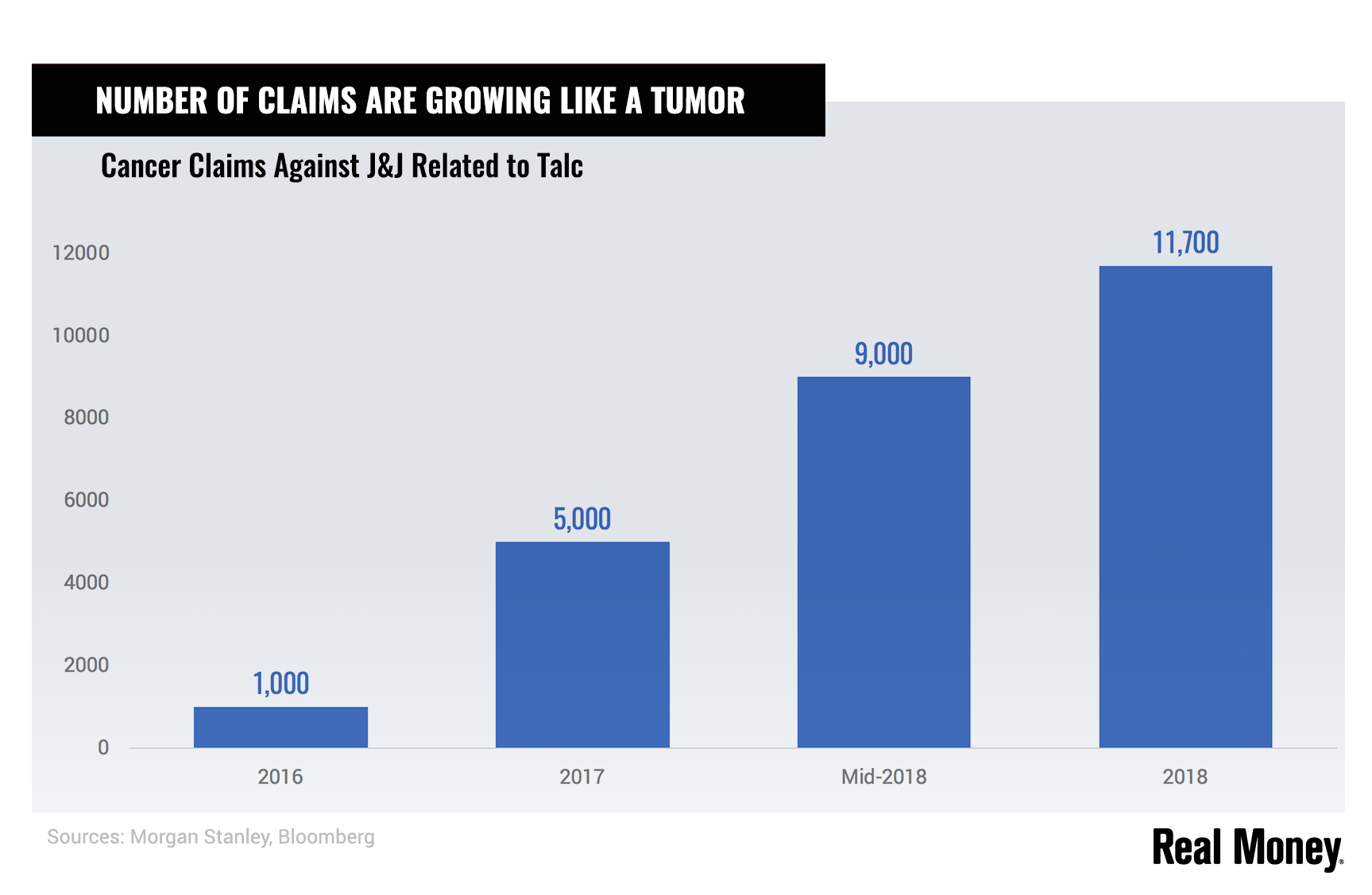 Yet, given the plethora of exculpatory evidence published by numerous prestigious universities related to talc and cancer, winning the cases against Johnson & Johnson will be an uphill battle.

"If this plays out in court, the burden of proof lies with the plaintiffs, which means they will have to do something that has never been done: scientifically show a causal link between baby powder usage and cancer," Collins pointed out.

Even if the company were to lose each of its cases, the total punishment the stock has taken would not seem to fit the crime. The largest penalties ever levied do not exceed $5 billion. And the largest liability ever assumed by a company barely reaches past $20 billion, less than half of J&J's recent market cap hit.

The company seems confident in its ability to beat this headline havoc, announcing the authorization of $5 billion in share repurchases after Monday's close.

As shares turn positive on that move, all eyes will head to Mad Money this evening to see if CEO Alex Gorsky can convince the market that the punishment so far is indeed cruel and unusual.

Get an email alert each time I write an article for Real Money. Click the "+Follow" next to my byline to this article.
TAGS: Investing | Stocks | Technical Analysis | Pharmaceuticals | United States | Consumer Products | Stock of the Day

Smaller to mid-cap names have fared somewhat better than large cap tech, but make no mistake... there is a circle of life/death here.

Here's the Only 'Risk Free' Way to Sell Options

Let me walk you through how to make money without putting yourself in peril.

Investing can be fun until it turns brutal for what seems to be no reason.

With This Market, It's One Way, or the Other

Let's look at this either/or market and why investors are complacent and ... getting angry.