As external pressures squeeze the railroad industry, understanding which companies are really nailing precision railroading is key for investors.

The idea behind the innovative type of railroading is that more -- more trains and track -- is not always better, but preciseness is.

"While it may sound counterintuitive, reducing fleet size actually enables a railroad to move more volume, by running fewer and heavier trains, faster and on schedule, as assets can be utilized far more productively and can yield significant savings," a white paper on the system authored by Canadian Pacific Railway (CP) explains.

"The prevailing view in the rail industry is that more locomotives, more cars and more crews allow for the movement of more volume. Precision railroading challenges this view. ... Because track and yard capacity is finite, adding more equipment creates congestion and slows down the system."

"We are not above copying anything that is successful, and there is a good deal that has been learned," Buffett told shareholders, expressing admiration for the business model.

"I doubt anyone is interested in unprecision in railroading," added vice chair Charlie Munger at the meeting.

So, with the importance and popularity of PSR in mind, it is important to observe just how well each company is doing with the lightened loads and sped up schedules.

Despite an earnings miss that has led shares down double-digits on Wednesday, the operator that was led for a time by Hunter Harrison is a leader in terms of low operating ratios.

"CSX delivered operating income of $1.3 billion, record operating ratio of 57.4% and earnings per share of $1.08, representing improvements of 2%, 120 basis points and 7% respectively," interim CFO Kevin Boone told analysts on Tuesday evening. "We continue to see significant opportunities to drive efficiencies across every aspect of our business."

The leadership position in cost cutting that still produced an earnings miss and guidance cut is clearly a worry for the market, as the macroeconomic issues are not easily solvable.

But the excellence in execution has given many investors and analysts a silver lining to hang onto.

"CSX is successfully implementing a precision scheduled railroading (PSR) model on its network, which we estimate can deliver an improvement in the operating margin to 42% by 2020," BMO Capital Markets analyst Fadi Chamoun said. "Execution has reinforced the sizable cost improvement opportunity as well as CSX's deep executive bench strength to execute upon this opportunity."

Progression of this system into the coming quarter will be key to keeping investors aboard while macro fears come to the fore and management attempts to control what it can.

Tuesday evening had dichotomous railroad results, with CSX sliding as it came up short of results after hours, while only hours before, Canadian Pacific pushed beyond expectations in a pre-market print.

"Canadian Pacific beat and maintained guidance and the stock closed 4% higher [on Tuesday]. CSX reported a small miss after the close, with the stock likely going lower on Wednesday as full-year revenue guidance was also trimmed," Loop Capital analyst Rick Patterson noted. "Diverging volume trends drove the differing outcomes. However, in a sense we're looking at the same story in different stages of their evolutions."

He noted that Hunter Harrison had been atop Canadian Pacific Railway for quite a while before joining CSX at the end of his life. As such, CPR has a head start and has found a happy medium in terms of rail service and operating efficiency.

"I was encouraged by how the volume and operating transfer were recovering from a challenging quarter," CFO Nadeem Velani said. "The end result was a Q2 operating ratio, decreased 580 basis points to second quarter OR of 58.4%."

The ratio comes back towards the company's traditionally industry-leading operating ratio after hitting a snag in its last quarterly result. For reference, the company reported a record 56.5% operating ratio for the fourth quarter of 2018.

If it can continue to operate at this stellar level while increasing volume over peers like CSX, it should continue to be a solid pick in the sector, especially as peer results pare down its stock price.

For investors eyeing ambitious operation on a down day for the sector, which after CSX's comments is certainly courageous, Union Pacific (UNP) might be the best bet.

Many analysts have named it a top pick amidst the outflows from the sector that are possibly unfairly causing shares to plummet.

With earnings coming up on Thursday, there is likely time to get more information before buying in for traders, especially as volume figures could come in light if CSX is a bellwether.

But, for investors eyeing a bit longer time horizon, the Omaha, Nebraska-based company's Unified Plan 2020 is aiming to set records for efficiency and is backed Hunter Harrison disciple Jim Vena as chief operating officer. The end goal is to achieve a 55% operating ratio, well below even CP's previous record.

"We see upside to the company's 60% operating ratio target by 2020," Credit Suisse analyst Allison Landry wrote upon Vena's hire. "The news that former CN vet and highly experienced Precision Scheduled Railroader Jim Vena was hired as the new COO comes as a welcomed distraction from the macro and our channel checks suggest that Mr. Vena who has nearly two decades of PSR experience at CN, including more than 10 years under Hunter Harrison, is a capable operator."

Indeed, if Vena and his efficiency system can distract from macro concerns, it could provide a great deal of relief to investors on Thursday.

In its first-quarter report, the company did come in a bit short of its goals, with an operating ratio at 63.6%, necessitating improvement in Thursday's report.

"We remain confident in our ability to achieve a sub-61% operating ratio in 2019 on a full year basis, and we still expect to be below 60% by 2020," CFO Rob Knight said in April. "Our commitment to reaching a 55% operating ratio beyond 2020 has never been stronger."

The progress of this plan will be key for investors, at the very least as a distraction, for the trend the stock sets for the remainder of the week.

Heading back to the great white north, another generally quite efficient operator is Canadian National Railway. Yet again, this was a key operational model of success for Hunter Harrison.

While the ratio jumped notably in the last quarterly report to 69.5% due to some one-time investments, the overall results and increased volumes led the stock nearly 5% higher on its April earnings result.

Interestingly, CEO J.J. Ruest pushed back against the primary focus on operating ratios, arguing that it gets too much attention.

"The one trick pony of operating ratio does not necessarily give you the best, easiest growth," he told analysts. "When we have investment that can generate a good return on investment capital, taking to cost of capital, we are inclined to do these things as opposed to sit on the sideline and shave off one more point of OR."

"We're looking at cost efficiencies, organic growth, some acquisition strong focus on returning invested capital but also strong focus on operating ratio," he said. "What you're seeing from CN is a more balanced scorecard than strictly pure PSR."

For an investor more interested in a holistic approach to railroads rather than a granular focus on PSR, the commentary might be a refreshing review.

As Stifel analyst Michael Baudendstiel put it: "Like curling and Molson, only Canadians seem to care about growing rail volumes."

For a closer look at the company's progress and a better comparison to the recently reported compatriot Canadian Pacific, investors will need to look forward to the earnings.

For the remaining railroads the standard of operation has been less precise judging in terms of operating ratios and will likely be a key area of improvement for analysts to observe.

Kansas City Southern (KSU) , in its last available reported quarter, was one of the worst at cost cutting, a pain point that was exacerbated by charges incurred in the first quarter.

Kansas City Southern's operating ratio was 76% for the quarter, nearly 20% higher than the record level set by Canadian Pacific and 10% above the prior year quarter.

It should be noted that a $68 million restructuring charge drove the ratio up 10%, but flat year-over-year is not exactly ideal either.

The railroad reports earnings on July 19, which will be a key time for investors to evaluate whether the company can contend with macro pressures and control its costs at the same time.

Another railroad where efficiency has come under close examination is Norfolk Southern (NSC) .

Analysts have noted a "strong operational rebound" from the company in recent quarter, quickly bringing its formerly industry high operating ratio more in line with peers.

For example, in the Virginia-based company's first quarter report in late April, a record operating ratio was achieved, marking a 3% improvement from the prior year.

Still, with its record first quarter tally at 66%, it remains a laggard and much of its turnaround has come from price increases that might be under threat as slowdowns forecast by CSX could prove problematic.

"When considering whether the other rails are likely to miss numbers or negative model revisions may be necessary following the 2Q print, Norfolk Southern and Union Pacific seem most vulnerable not only because of the geographic overlap that NS has with CSX, but also because NS and UP have had similarly negative volume comps in the 2Q19 of -2.5% and -4%, respectively, whereas CNI had unit volume +1.4% in 2Q19," Stifel analyst Michael J. Baudendistel said.

With its earnings date coming up next week, the stock is peeling back on the perceived overlaps, cooling off a nearly 40% run prior to the CSX-driven slide.

Whether the operational rebound can continue will likely be imperative to getting the stock trajectory back on track to gains or if it will only add to macro pressures that are now more fully understood will be a key factor to monitor moving forward.

For a visual representation of the comparative results (adjusted) check out the chart below: 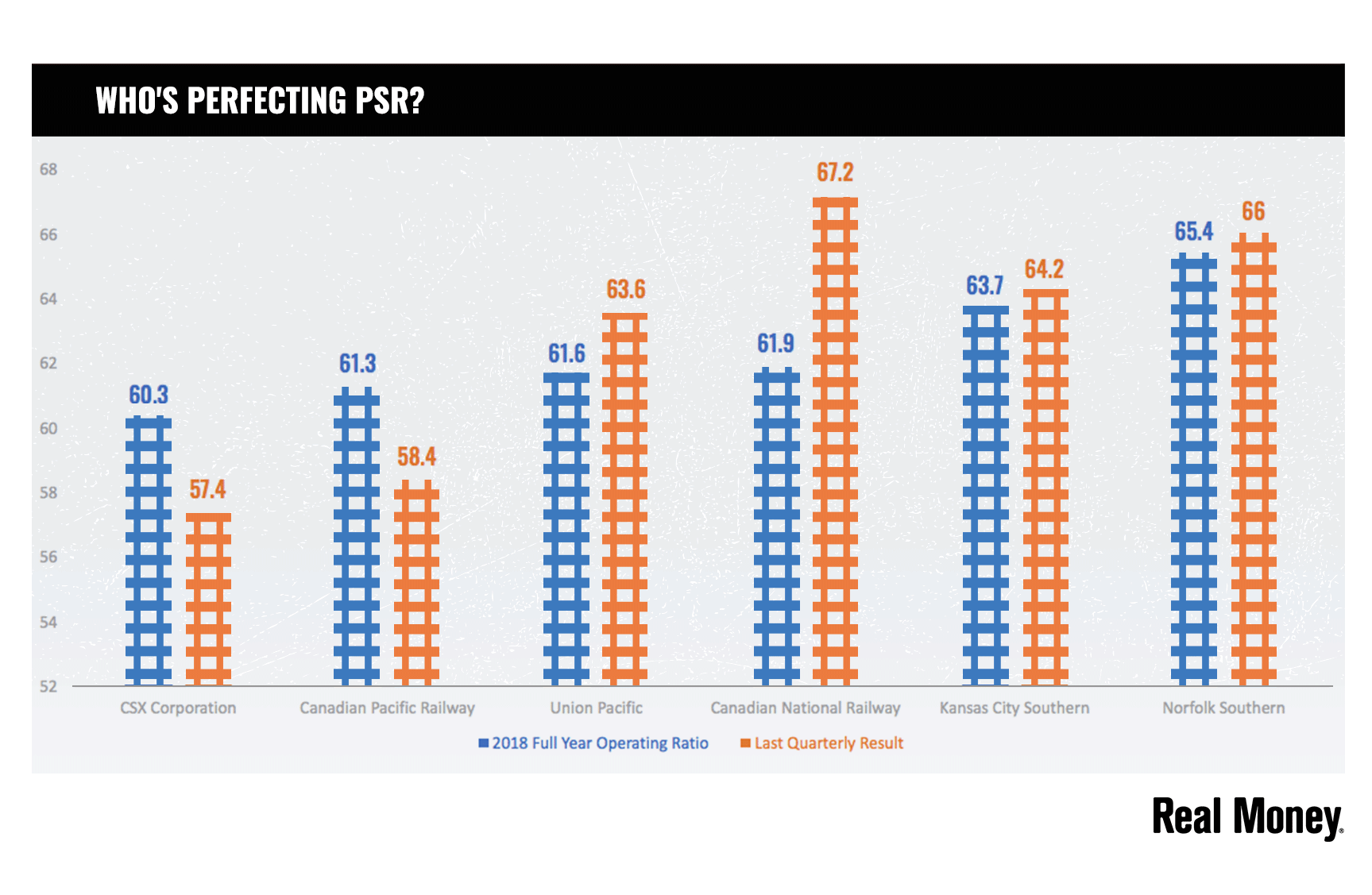 Get an email alert each time I write an article for Real Money. Click the "+Follow" next to my byline to this article.
TAGS: Economy | Investing | Markets | Stocks | Consumer | Transportation | Industrials | Analyst Actions | Stock of the Day | Warren Buffett

3 Canadian Stocks With Higher Dividend Yields Than Their U.S. Counterparts

Sometimes it pays to look north of the border for companies with great dividends.