General Electric (GE) stock surged on Monday after reports of a buyout of its GE Capital Aviation Services unit by Apollo Global Management hit the presses.

Shares of the Boston-based business boomed 6.2% on Monday, hitting their highest close since early November at $8.74 per share.

The sale of the business would allow the company to deal with its ballooning debt load, a key to maintaining the company's much-protected, although diminished, dividend and preventing a junk credit rating.

"We believe that any sale of GECAS would go a long way towards reducing the FinCo perceived liability risk," Wolfe Research analyst Nigel Coe wrote in his take on the rumored deal. "In our view, the impact on GE stock cannot be solely measured in terms of GECAS book value, but as another step in the balance sheet de-levering story."

He and his team retained their "Outperform" rating for the recently rising stock with a price target of $15 per share, nearly twice its value at the start of 2019.

"We view this as a potential positive catalyst," he concluded.

Such bullish calls have certainly helped shareholders playing laggard stocks as of late, with the stock set to open about $2 above its Dec. 24 level on Monday morning.

Real Money technical analyst Bruce Kamich also made the case that the stock should continue to run toward levels not seen since the accession of new CEO Larry Culp in the nearer term.

Asset sales have been a hallmark of Culp's overall efforts to relieve the company of its outsized debt burden, something that has hung over the company for years and intensified amid increased scrutiny from rating agencies. 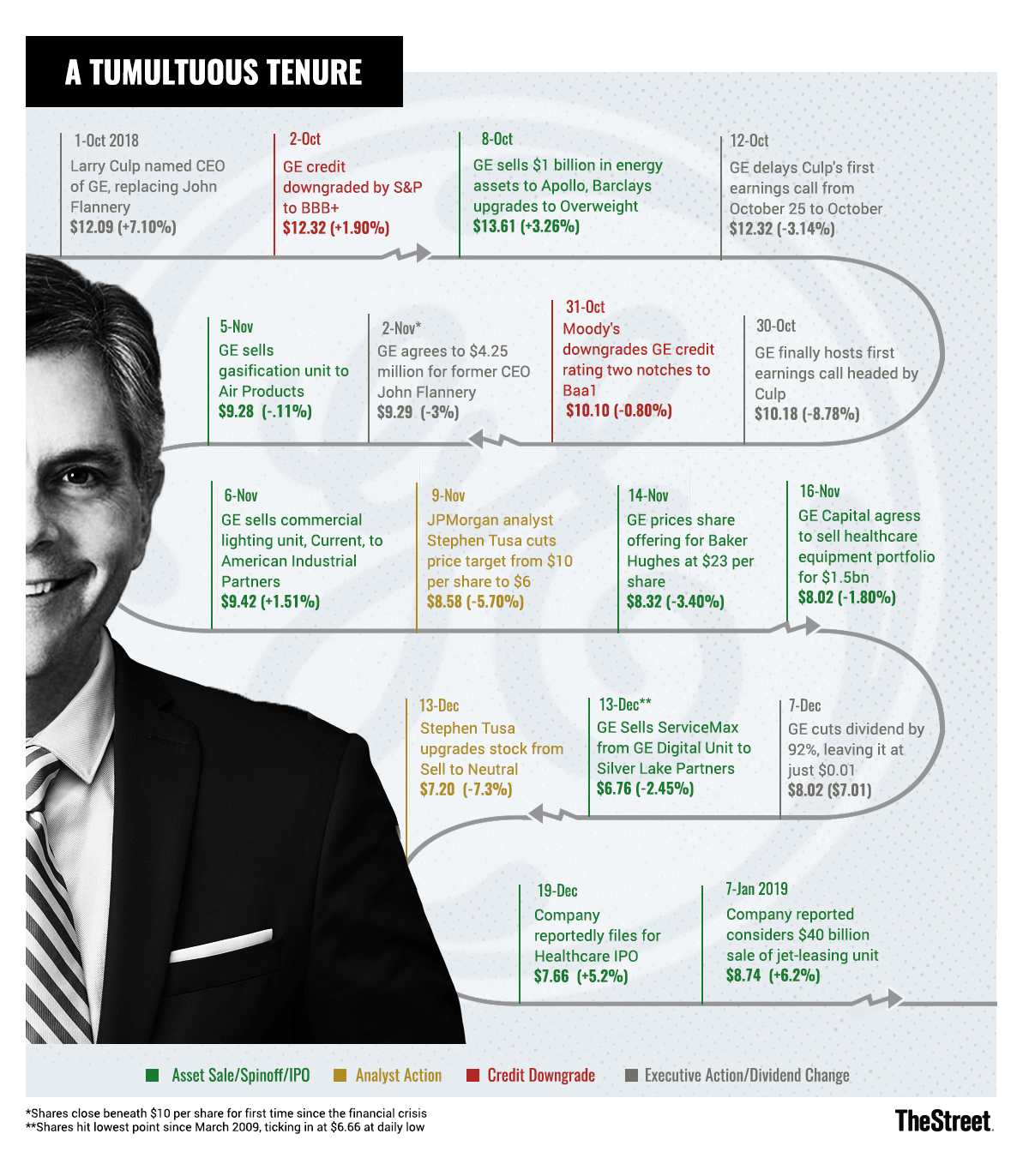 "The value creator needed to work fast, and it looks like he is," Real Money contributor and GE shareholder Stephen "Sarge" Guilfoyle commented. "[GE's jet leasing business] is considered a key asset among those that GE might sell, so they have to get this right, and talk is that the unit could fetch as much as $40 billion. That would go a long way towards satisfying a black hole that could amount to an estimated $100 in net liabilities."

He signaled his positivity into the company's earnings call later this month, touting his own investment on behalf of the Stocks Under $10 portfolio he manages.

"The potential benefit of risk vs. reward is no longer this firm's enemy," he concluded.

The Street is Still Skeptical

Despite the efforts by Culp, many Wall Street analysts advised investors not be fooled by another apparent "fire sale" by the company that likewise remains only a rumor.

"While a potential GECAS transaction could be worth $40 billion, this would only match the book value of GECAS reported assets of just over $40bn," Gordon Haskett analyst John Inch wrote of the rumors on Monday morning. "Note that if GE ends up selling GECAS to Apollo, it would be doing so as the valuations of primary competitors AerCap Holdings (AER) and Air Lease (AL) have collapsed. Consequently, this could reflect GE's desperation to fire sale what it views as non-core (eg, Baker Hughes (BHGE) ) regardless of valuation based on an obvious need to raise cash as quickly as possible."

GE's credit rating currently sits at Baa1 at Moody's Investors Service, and BBB+ at Standard & Poor's and Fitch after the recent downgrades. Inch said that the recently rumored aviation services sale could end up being a "sugar high" for investors seeking a quick cure to the company's chronic debt and credit concerns.

Inch retained his "Underperform" rating for the stock amid his continued concerns with the company's "fire sales" of assets, which are fueled by looming liquidity issues in his view.

Nonetheless, he set a $10 price target for the stock, which would offer some upside to investors if achieved.

J.P. Morgan analyst Stephen Tusa added his own questions surrounding the deal by speculating that it could come in lower than the Bloomberg report anticipates based around the same comparisons drawn by Inch.

"The value of this book is a major TBD that is unlikely to be the 'silver bullet' to the leverage issue at GECS that Bulls appear to expect, and, to the contrary could represent another event in which the negative difference between book value as recorded on the GE balance sheet and market value of the assets is clarified," he wrote. "As had been the case for GECS since the wind down began in 2016 - if GECAS does not turn out to be valued as the 'crown jewel,' we believe it deflates the Bull thesis."

Tusa remained "Neutral" on the stock, projecting further downside with a $6 price target tacked onto his analysis.

"This would be great if it were done to unlock value, but GE's book value wallows well below the current share price," he wrote in his column. "Plus, buyers know the overall condition of the company. There isn't an urgent need to aggressively bid for the pieces being sold."

Shares are declining slightly one hour after market close.

Get an email alert each time I write an article for Real Money. Click the "+Follow" next to my byline to this article.
TAGS: Earnings | Investing | Stocks | Aerospace | Energy | Industrials | United States | Stock of the Day