Semiconductor investors in companies such as Nvidia (NVDA) , Advanced Micro Devices (AMD) , and Qualcomm (QCOM) need to know just how much is at stake in the Far East.

Looking at the trajectory of the Philadelphia semiconductor index (SOX) and its most prominent names, it's clear that a slowdown in China stings growth theses in the space. This is expected not only based upon the revenue that each chip firm generates from the country, but also the supply chains that are heavily reliant on the Chinese economy. 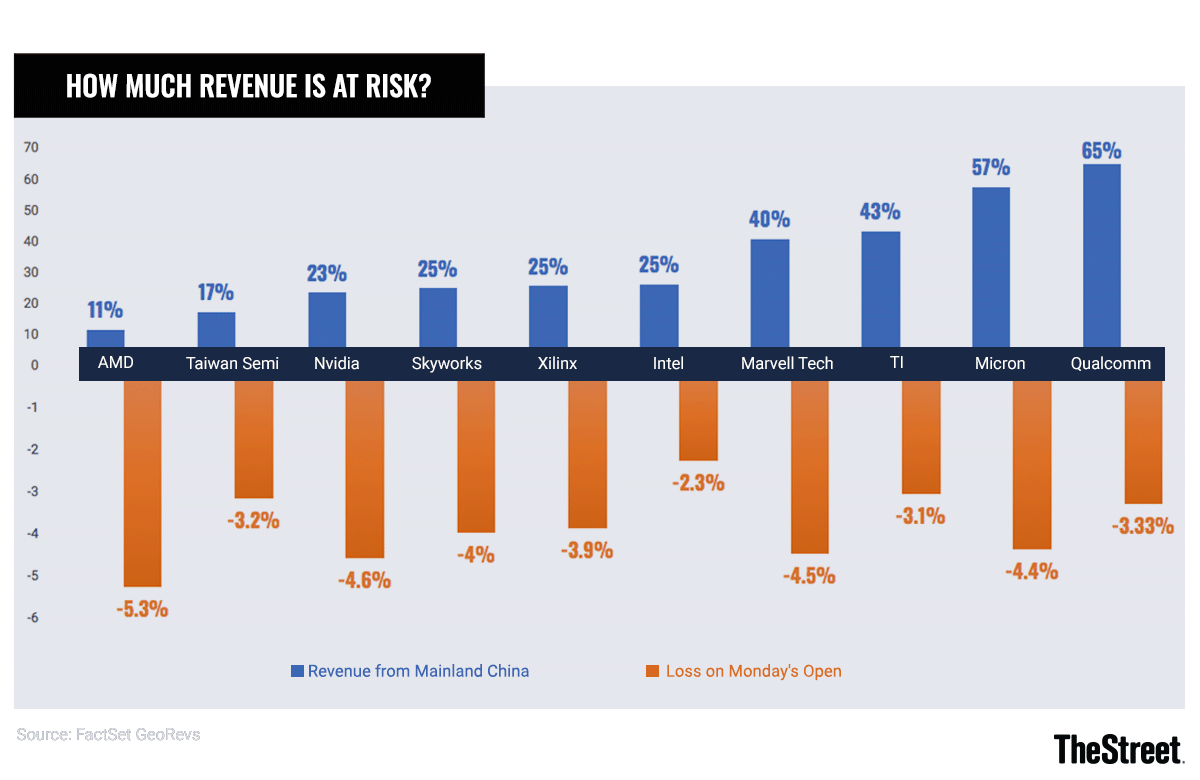 After a devastating drop in China's relevant indices, following President Trump's weekend trade tweet, the ripple effect is certainly being felt across major U.S. indicators. The Dow slipped nearly 400 points after the first trade, while the S&P 500 fell about 1.5%, after historic drops in China.

The pain was felt most pointedly in the tech and semiconductor spaces, with the iShares Semiconductor ETF  (SOXX) dropping 3.5% on the open as many worried about their reliance on China. This is especially so for Nvidia, given its gaming exposure in the Chinese economy, something noted by CEO Jensen Huang as an overhang as Chinese macroeconomic conditions deteriorate.

"Given that a large majority of the US companies with high revenue exposure to China are in the tech/semi space we would expect the tech sentiment to bear the brunt of the price adjustment today," Jefferies analyst Sean Darby said. "Our IT sentiment indices having rolled over and the Jefferies risk index having shifted into a 'neutral' setting, the US S&P 500 IT sector will likely be under a lot more scrutiny over the next few days."

The scrutiny in tech also of course extends to the products that require semiconductors, which will likely be affected in an outsized manner by a more tenuous trade situation. Apple (AAPL) may be the best indicator, as its slide on China worries has major implications for a number of companies, with Qualcomm likely being the biggest loser after catapulting forward from a settlement with the Tim Cook-led company.

"We need to monitor US-China relations for a full-scale growth in on-premises data center investment by Chinese firms, which have recently curbed," Deutsche Bank analyst Yu Yoshida said. "While many firms in the electronic components area still have high iPhone sales weightings, in memory (particularly DRAM) Chinese smartphones have a larger presence."

Nonetheless, Jefferies took these indicators as signs that dip buying could come into vogue as the trade tensions could be simply bluster and earnings are still on track to recover.

"The bottom line is that the Tech sector has gone through a classic bounce as the environment was no longer deteriorating or not getting any worse," Darby said. "The fact that the components of the lead indicator are improving suggests that earnings are bottoming out and investors should buy the dip."

The questions that will remain pertain to which stocks are marking the most attractive dips and also which stocks remain the most insulated should trade conditions worsen, a key concern for more risk-averse investors.

"This is likely a buying opportunity for Asian stocks, since I doubt the effects of the trade war are going to deepen," Real Money contributor Alex Frew McMillan said on Monday. "But the age-old saying is that markets hate uncertainty -- these tariffs, and trade talks, are both uncertain again."

For semiconductor stocks, the thesis remains much the same and investors need to know how large the risk is they are confronting, whether or not it ever comes to a head.

Stocks in the sector have recovered slightly from their lows on the open, providing a modicum of confidence to investors caught off guard on Sunday.

Get an email alert each time I write an article for Real Money. Click the "+Follow" next to my byline to this article.
TAGS: Investing | Politics | Stocks | Semiconductors & Semiconductor Equipment | Software & Services | Technology | Technology Hardware & Equipment | China | Analyst Actions | Stock of the Day

These D+ rated names are displaying both quantitative and technical deterioration.

Are they trying to tap the brakes or is this an admission that they cannot tap the brakes and must do more of the same to make sure risk taking accelerates to ludicrous speed?