The rise of the experience economy and the fall of the mall could provide an opportunity for experience-based companies like Dave & Buster's Entertainment (PLAY) to cash in on once-trafficked real estate.

Its's no mystery that the mall is going out of style. Traditionally buoyed by bankrupt or lagging  retailers like Sears (SHLD)  , J.C. Penney (JCP) , and the Gap (GPS) , many malls are seeing traffic dwindle.

"My view on malls hasn't changed much since 2014 when I said at least one third of the malls in American need to close or change," Jan Rogers Kniffen, CEO of J Rogers Kniffen Worldwide Enterprises retail consultancy told Real Money. "Mall traffic isn't up this year even though its been a great year for retail and I don't expect much improvement next year."

Such problems were highlighted by apparel retailer Francesca's Holdings (FRAN) , which noted that mall traffic expectations have softened the company's outlook and motivated store closures.

During the quarter, the company moved to close four boutiques and outlined plans to close another 11 in the fourth quarter based on disappointing performance.

Kniffen said that this is a symptom of the changing nature of the mall, as evidenced by companies like Kohl's (KSS) offering store space to grocers like Aldi and allowing for returns of Amazon (AMZN) purchases.

"The key for malls is to drive traffic, which is why a grocery store makes sense," he explained. "It's not as if all of these malls will be bulldozed, they will need to adapt someone will have to move in."

Changing of the Guard

"Malls used to have a food court so people could eat and then get back to shopping," Kniffen commented. "Now restaurants are there so people show up and the hope is that they buy something while they're there."

However, this could provide a mutualistic relationship for malls and companies like Dave & Buster's that are trying to expand.

"We currently have a total of 22 signed leases providing us significant visibility on new store growth into 2019 and in the first half of 2020," Dave & Buster's CEO Brian Jenkins told analysts on Tuesday evening. "Our long-term target is to open 231 to 251 locations in the U.S. and Canada, including 20 to 40 of the 17K format stores."

The mall locations could also offer the company new opportunities in order to drive sales in markets that would not affect the existing store base and offer an ideal opportunity to more experience focused mall locations.

"People want something fun to do at the mall," Kniffen said.

To be sure, traffic even to the experience-based restaurant, gym, and entertainment enterprises is not guaranteed. Even these industries are threatened as more people cook at home or order food on Grubhub (GRUB) , exercise at home, and subscribe to entertainment services like Netflix (NFLX) .

Certainly Dave & Buster's sagging same store sales speaks to that very threat, especially as the company touted "cannibalization" of sales due to oversaturation in specific markets and diminished sales even amid discounts. 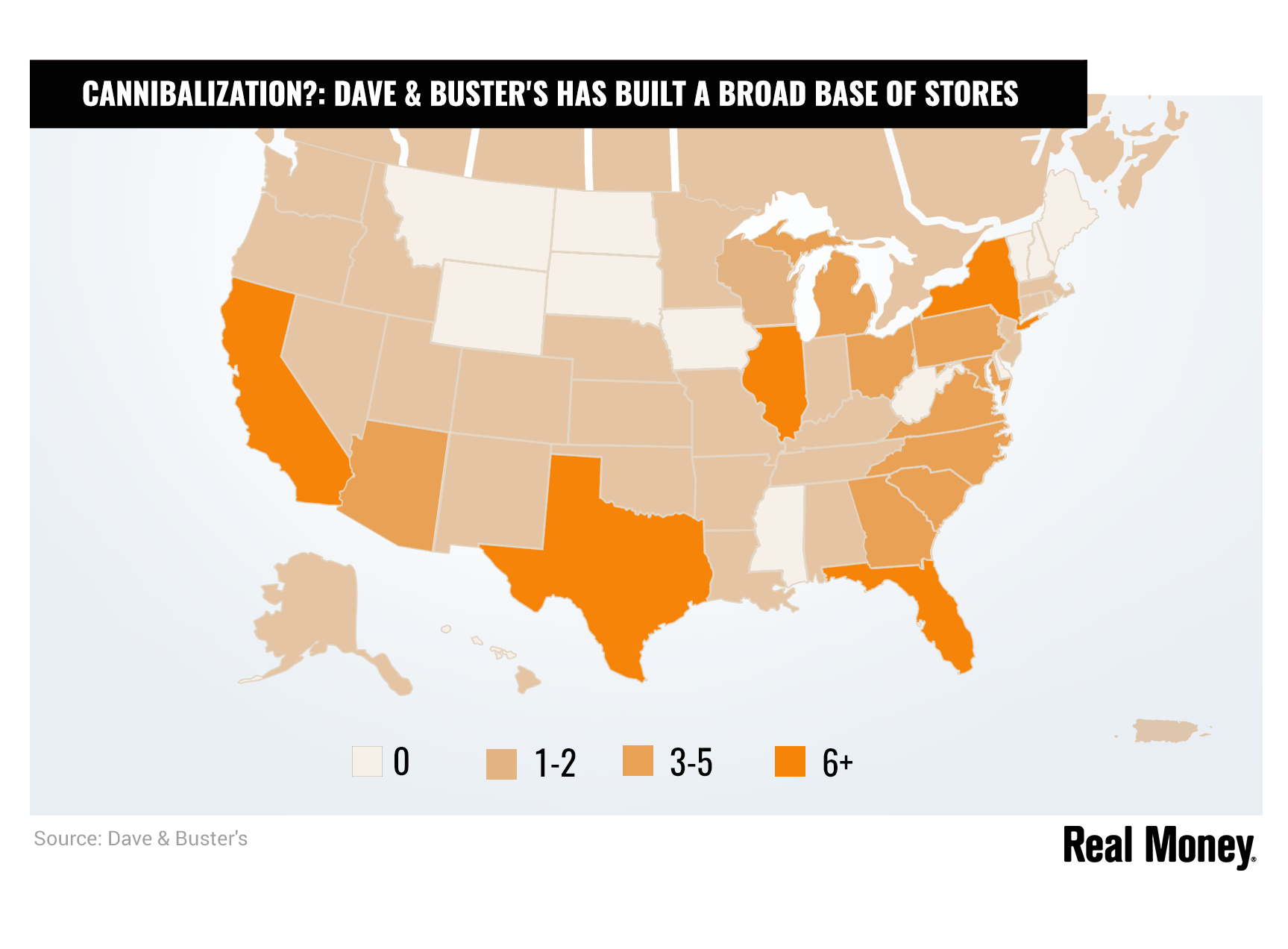 Jim Cramer touched on that very issue on the floor of the New York Stock Exchange on Wednesday morning.

"Any sign that the experiential economy is just continuing to be stay at home is worrisome," he said. "If people don't go out and they hunker down, that's worrisome."

For the sake of both hurting entities, many will hope that an appetite for activities at places like Dave & Buster's can revive the American mall.

Get an email alert each time I write an article for Real Money. Click the "+Follow" next to my byline to this article.
TAGS: Investing | Stocks | Restaurants | Retail | E-Commerce | United States | Consumer Discretionary | Stock of the Day