Boeing's (BA) gains aren't set to stall soon if its backlog is any measure.

Shares of the aerospace and aircraft manufacturer are headed skyward after a big earnings beat from the company. The massive, seven-year backlog for the company could serve to keep this tend running.

"I have said since December 2017 that this is a $400 stock and its going there," Jim Cramer commented on Wednesday morning.

As the company keeps demand running for its planes and sets its sights on an even better 2019, the stock could run even further beyond $400.

"We raise our 12-month target price to $500 from $450..reflecting our positive outlook for commercial and military aerospace, and BA's strong execution," CFRA analyst Jim Corridore commented. "Commercial backlog of 5,900 planes is valued at $412 billion and BA booked 262 orders while shipping 238. With KC-46 tanker shipments underway after long delays, F-18 demand strong, and services demand robust, BA is hitting on all cylinders right now."

He added that even impacts from China are immaterial given the company's strong cost controls and fortress backlog. 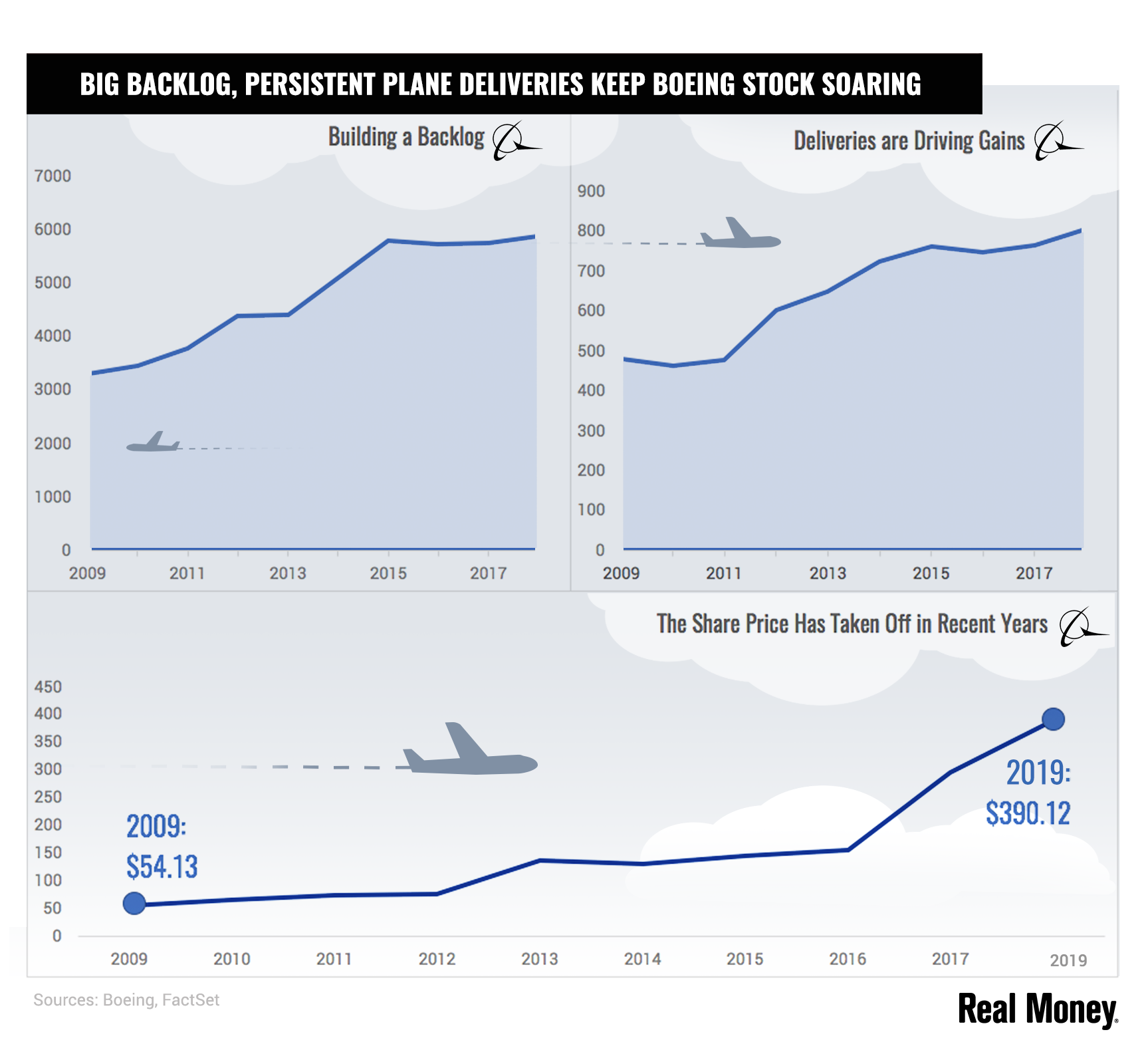 The record revenues reported for the quarter were driven by record plane deliveries in 2018.

"Boeing Commercial Airplanes generated revenue of $60.7 billion reflecting a record 806 deliveries including the delivery of the first 787-10 Dreamliner and the first 737 MAX 9," CEO Dennis Muilenberg said. "During the year, we delivered 256 MAX airplanes, nearly half of the total 737 deliveries. Continued healthy sales activity contributed to 893 net new airplane orders during the year, adding to our robust backlog."

He added that the China Completion Center is up and running despite the trade war, and notched its first 737 MAX delivery to Air China in December.

The company is now touting up to 905 deliveries in 2019, which would mark nearly twice the deliveries the company reported 10 years ago.

The only issue could be a return to a government shutdown that could hamper the approval of new commercial planes by the FAA, which was shut down in the political spat.

"While the partial government shutdown has not had a material impact on Boeing to date, we are concerned about the short term effects on our friends, families and neighbors in the communities we operate in as well as the long term effects that may begin to weigh on our operational efficiency, pose other challenges for our business and the aviation sector in general," Boeing said in a statement to CNBC amidst the initial government closure. "We urge the Administration and Congress to reach a solution to this funding impasse quickly to fully reopen the government and preserve U.S. economic growth"

If the government were to shut down again in just a few weeks, that could temper the company's trajectory on deliveries.

For now, that turbulence looks to be avoided as the stock continues to soar.

Fostering that stock trend against more macro issues is the company's massive backlog which is stretched out for seven years.

"Over the long-term, we remain highly confident in our outlook which forecasts the demand for nearly 43,000 new airplanes over the next 20 years, which will help double the size of the global fleet," Muilenberg said. "These long-term demand fundamentals, combined with healthy market conditions and a robust backlog, provide a solid foundation for our planned production rates."

Such a massive backlog, coupled with a mammoth cash pile, make the stock one of the safer plays int eh broader market and justify its Dow-leader status.

The backlog is also resilient to trade tensions as it indicates the fact that demand will win the day over political issues.

"We expect China as a long-term growth market for us," Muilenberg explained. "I can tell you having been intimately involved in the discussions and engagement with the governments both in the U.S. and China, we see progress on that front. We see convergence, and we also see that there is clearly a mutual benefit to having a healthy aerospace industry for both the U.S. and China. China needs the airplanes for growth to fuel their economy and to meet their passenger growth and cargo growth needs."

Jim Cramer summed up the situation even more succinctly.

"China needs Boeing more than Boeing needs China," he concluded. "When you have a 7 year backlog, a lot of other people want those planes."

As long as people continue to want the planes, that massive backlog and delivery efficiency could sustain the cash cow for the next seven years, and by Muilenberg's estimates, possibly even two decades.

As Stephen "Sarge" Guilfoyle said, "talk about 'own it, don't trade it!'"

Get an email alert each time I write an article for Real Money. Click the "+Follow" next to my byline to this article.
TAGS: Earnings | Investing | Stocks | Aerospace | Airlines | Transportation | China | Analyst Actions | Stock of the Day