Many might be surprised to find that the best-selling phone model of all time is not an Apple (AAPL) iPhone, but a Nokia (NOK) 1100.

Many Nokia investors in the year 2000 would also have been shocked to hear that in the next decade Nokia stock would lose nearly 90% of its value. From that vantage point, it becomes clear why Action Alerts PLUS portfolio manager Jim Cramer eschewed recommending the stock for over 20 years.

So the question becomes: what happened?

The long answer is: quite a bit went wrong. The shortest answer is: the iPhone.

Looking at the stock chart, Nokia reached a peak stock price of around $40 per share in 2007, the year Steve Jobs launched his signature smartphone. Within two years, the market share of Nokia in smartphones had been eroded and the share price plummeted below $10.

Within six years, the share price dropped below $5 per share and motivated Nokia to offload its smartphone business to Microsoft (MSFT) as the Steve Ballmer-led company strove to compete with Jobs as well. 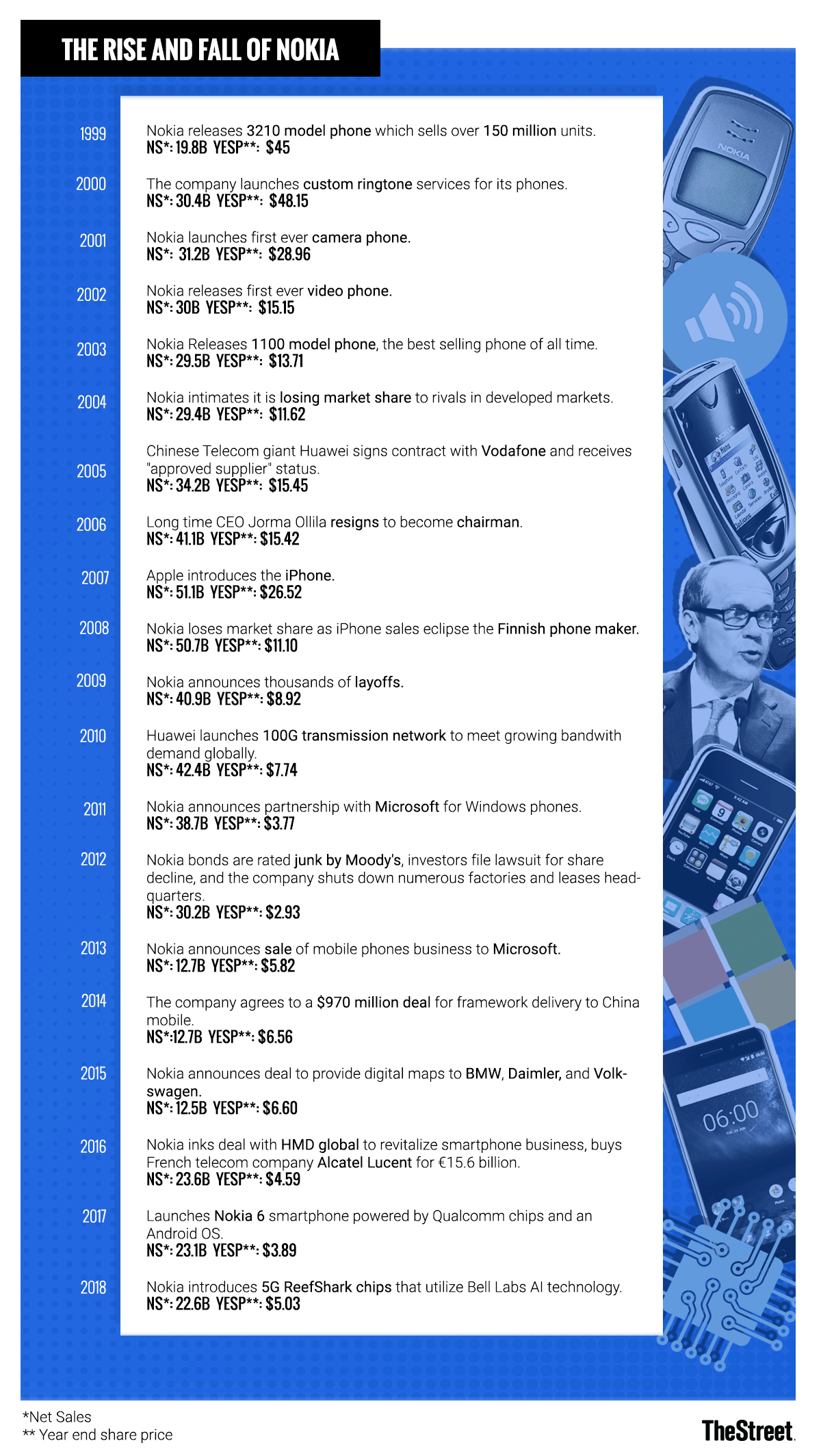 But like Lazarus rising from the grave, we may have a comeback story on our hands as Cramer has come back to recommending the stock after two decades of avoidance.

He is not the only one either.

"As that 5G ramp grows both in and outside of the U.S. over the coming quarters, it means we should see quarter over quarter improvement in Nokia's revenue and profits," Tematica Research CIO and Real Money contributor Chris Versace said.

He added that margins are going to continue to expand, underlining a comeback story for the company.

"This will likely be rather obvious when, in hindsight, we compare its second half of 2019 results with the first half of the year," Versace explained. "Underscoring that outlook, Nokia issued favorable margin guidance for 2020 in the range of 12%-16% vs. 9%-12% this year and 9.7% for all of 2018. This improvement reflects not only operating leverage associated with the growing networks business, but also the monetization of the company's 5G patent portfolio across smartphones and other devices."

Considering the company started as a pulp mill in the Finnish reaches of the Russian Empire during the 19th century, reinvention is never out of the question for this company.

Time will tell if the recent bullishness on the stock is justified, but with the torturous timeline some investors have endured, such a revival would be one of the great stock stories of all time.

Stay tuned for a video interview with Versace where he explains why you should believe in the beleaguered stock this year.

Get an email alert each time I write an article for Real Money. Click the "+Follow" next to my byline to this article.
TAGS: Earnings | Investing | Stocks | Technology Hardware & Equipment | Telecommunications | China | Europe | Analyst Actions | Telecom Services | Stock of the Day