The charts of the major equity indices saw several violations of near-term uptrends and one index has now turned negative. But while the charts weakened, sentiment indicators continue to imply an excess of bullish sentiment.

Damage to the charts came in the form of the S&P 500 (see above), DJIA, Nasdaq Composite, Nasdaq 100, MidCap 400 and Value Line Arithmetic Index all closing below their near-term uptrends lines and are now neutral.

Also, all were confirmed with bearish stochastic crossover signals.

And while all those just listed held support, the same is not true for the Dow Jones Transports (see below), which closed below its support level and is now in a near-term downtrend. We would also note that, in our experience, the Dow Transports have frequently worked as a leading index. Whether that is the case this time is yet to be seen. 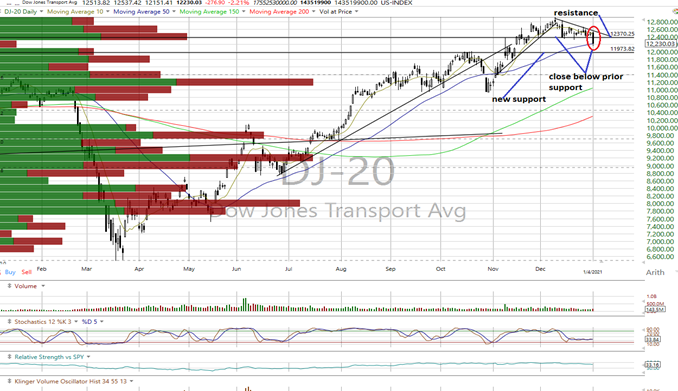 Cumulative breadth is neutral on the All Exchange and Nasdaq and positive on the NYSE.

The data are still sending some cautionary signals.

The Open Insider Buy/Sell Ratio is neutral at 36.7 as insiders did some buying of the weakness.

The forward 12-month consensus earnings estimate for the S&P 500 from Bloomberg saw a jump to $165.79 per share. However, valuation remains extended with the S&P's forward P/E multiple at 22.3x while the "rule of 20" still finds fair value of 19.1x.

The charts saw enough deterioration Monday, when combined with the data, that warrants a change in our near-term outlook for equities to "neutral/negative" from "neutral."

Get an email alert each time I write an article for Real Money. Click the "+Follow" next to my byline to this article.
TAGS: Indexes | Investing | Markets | Stocks | Technical Analysis | Transportation | U.S. Equity