I actually heard someone on television say on Wednesday that Apple (AAPL) was the most important stock and we should be bullish on the market because Apple is going up. I found that amusing for a variety of reasons because that same person wasn't terribly concerned about the market in May or February when Apple was going down. That kind of chatter just comes from the School of Making Stuff Up.

Of course to me that is the shift in sentiment that we've seen in the last month. This is anecdotal but statistically, check out the Investors Intelligence bulls because they are now at 59.6%, which is up from 54% a couple of weeks ago and now the highest since April. Recall a week ago we saw the fewest bears since January 2018. 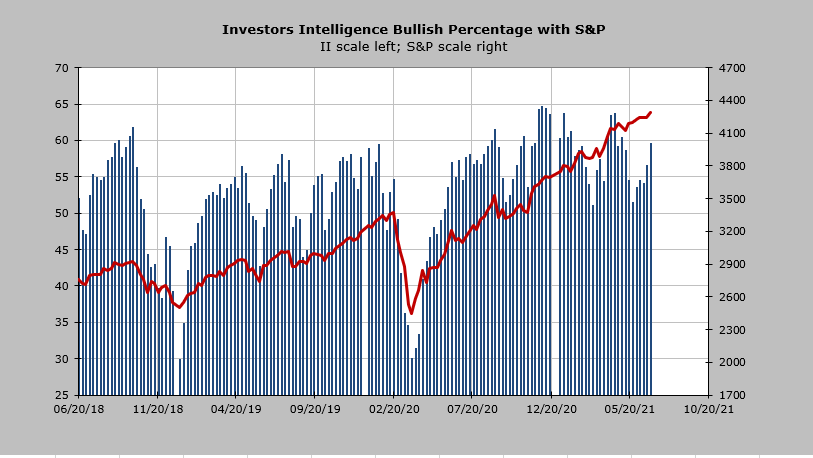 But let's talk about the chart of Apple for a minute. Some would say it has gone sideways most of the year. I would concur since it just now back to the neighborhood it was at that late August peak. That having been said, the trend has still been up with higher lows. Apple never threatened with a lower low.

The stock is clearly into some resistance which to me makes the chart okay but not great, mostly because the stock is up 12% in a straight line and I liked it much better when I warmed up to tech stocks back in May. But that's just my nature.

And what we do know is that the current Daily Sentiment Index (DSI) for Nasdaq is at 88 so any move up and over that resistance could/should lead the DSI up and over 90 which in my view would either lead to a blow off or a rally and give back. And since blow offs are atypical I'd lean toward the latter.

I also heard someone note that if the yield on the 10-Year goes to 2%, the big cap tech stocks would do just fine in that environment. I suppose he forgot how they did a few short months ago when we didn't even get to 1.80% and Apple, which is now loved at $136, was at $116. But that's the sentiment shift from six weeks ago.

Away from that, breadth finally improved and had its best day since last Thursday. That means the Overbought/Oversold Oscillator finally budged. You need to squint to see it, but it ticked up. Any positive breadth readings in the next two trading days should lift the Oscillator up quite a bit (that's the math) to get this indicator into an overbought situation. That's been my view and I'm sticking with it.

Let me note that the S&P has been green for five straight days, something it hasn't done since early March. If -- and sure it's a big if -- the first day of the new month and quarter keeps it green, then we'd be looking at six straight green. I would think that even then price oscillators would be getting short term overbought in early July, as I expect my own Oscillator, which is based on breadth, to do. That's why I still think in early July we see an overbought market with sentiment leaning too bullish.