Remember what we were thinking just 24 hours ago. We wondered. Wondered if managers would lean into Tuesday's rally (that had closed at the top of the day's range), or chase the market with newly created (September) cash. Hint. They leaned in.

Distribution is now as clear as a ringing bell. I probably should have called it earlier, but markets are now pricing in the certainty of uncertainty. I believe that our trend has indeed turned. I have stopped adding to even conviction longs as of noon on Wednesday. (That's not exactly true. I did add to both Tesla (TSLA) and Apple (AAPL) well after Sister Clara had rung that bell. Sister Clara was awesome. Just sayin'.) This is mostly true, though. Trader behavior must change once one accepts that the environment has as well.

What happens now? OK, tough one.

Let's take this down to a level that we all can wrap our heads around. What just happened? I do not mean just Wednesday, though market behavior for that session is quite telling. I really mean financial markets and not just equity market behavior, and the period in question honestly covers about three weeks, although an argument might successfully be made that the foundations of instability (if there ever could be such a thing) had been laid months prior.

Lines in the Sand

Let's think of our environment as a mathematical equation. The result, or what comes after the "equals" sign is what we call price discovery. What we have there is a marketplace where the major indices, at the headline level, have all broken through support at their respective 50-day simple moving averages. For these indices, that line has now become resistance, which is unfortunate as it increases the likelihood that many traders will in these cases target the 200-day SMA.

For example, I offer an unmarked three-month daily chart of the Nasdaq Composite. Just focus on the action around the blue line (50-day SMA) over the past five sessions compared to the five days before that. 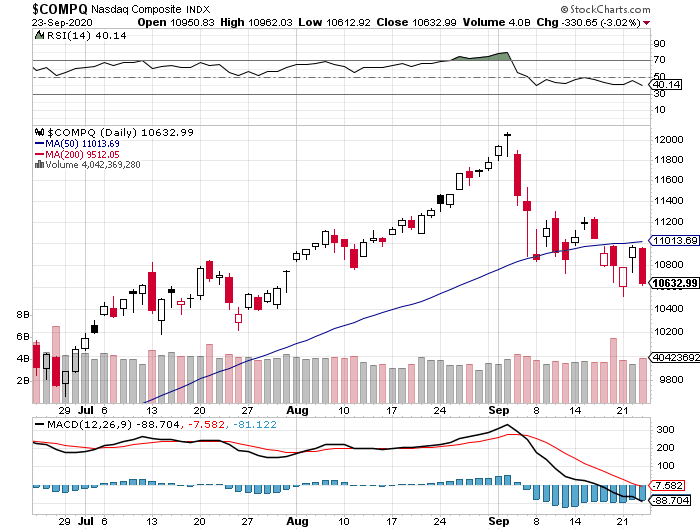 I will try not to bore you to death, but I could have used the same chart for the S&P 500, the Dow Jones Industrials, or the Nasdaq 100, though, there is little similarity between some of these averages in terms of weighting or composition. The action around that blue line is the same.

At the same time, Relative Strength sags but not enough to turn the tide of the flow of capital. Note, however, the MACD (Moving Average Convergence Divergence) bearish crossover that occurred almost as soon as that blue line was tested as support. There is a lesson to be learned there.

As chart watchers move down in market capitalization, matters, at least technically, get even worse. The S&P 400 (mid-caps), the S&P 600 (small-caps), and the Russell 2000 (also small-caps) have all already surrendered both the 50-day and 200-day simple moving averages. The S&P 400, and the Russell 2000 both closed below the 200-day line on Wednesday, but the S&P 600 (for many traders, an unwanted market stepchild to sound cruel) has already found resistance at that spot. Check this out: 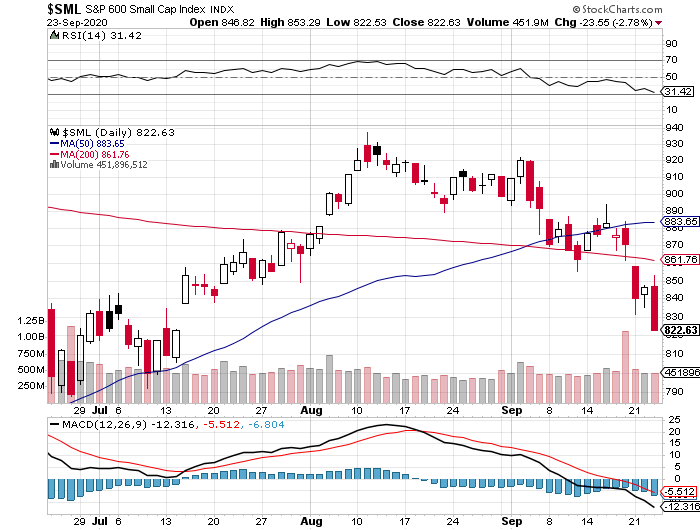 Not only does this measure of small-cap market performance now approach honestly oversold technical conditions, it does so after receiving a meaningless "golden cross" in early September. Just look at the daily MACD. Have not seen a crossover of any kind since mid-August. The signs were there... if we wanted to see them.

By the way, one can find decent-looking charts if instead of moving up or down in cap size, we narrow scope by industry or type. The Dow Transports remain well above both of these key technical levels even now.

Now we understand that the result has been a technical breakdown in risk-asset pricing. The equation that produces this result is rather complex. The main culprit is without a doubt, the inability of Congress to compromise in order to place the welfare of the American people above the potential of benefiting themselves politically shall the other side catch the majority of blame in the face of calamity. In other words, our legislators appear to be choosing calamity for possible political advantage once people suffer, rather than doing something that might circumvent that suffering in the first place. I know there are party loyalists among you. You are both wrong if you think "they" are as loyal to you as you are to them. You are useful to them.

What this does is put the entire onus for carrying the economy upon the central bank. In response, the Fed instead of appearing confident, sounds as if they are a bit shaken in having to fight the good fight by themselves. You heard from Powell, Clarida, Rosengren, Evans, and Mester all on Wednesday. They are asking for help. Today, you hear from Kaplan, Bullard, Evans, Bostic, Barkin, and Williams, all in addition to Powell and Treasury Secretary Mnuchin who both testify before the Senate Banking Committee this morning.

They do not sound confident in their ability to produce either increased economic activity from here, or inflation -- as other democracies / republics appear to be more readily able to provide fiscal as well as monetary support / stimulus as the pandemic deepens going into winter. Thus the U.S. dollar rises in value as currency traders run to safe haven. Gold, silver, agricultural and industrial commodities all stumble.

Now there is this election.

The market, in my opinion, is pricing in the certainty of increased uncertainty. Some observers claim that the market is now pricing in higher taxes and increased regulation should the Democrats run the table in November. While that is possible, it is also possible that markets are pricing in a lengthy, and chaotic outcome that will end up in the courts -- the Supreme Court to be precise. This is problematic for obvious reasons. In my view, this is likely what investors fear most.

We all thought that President Obama would be awful for the stock market. He was good for the markets with an assist from the Fed.

Many professionals thought that President Trump would be awful for the stock market. He, too, was good for the markets, also with an assist from the Fed.

This is more about chaos than who takes the top of the ticket. Personally, I always get a little nervous when one party controls the executive branch as well as both houses of the legislative branch.

One question. Where is that guy who never heard of Aleppo when we need him?

Jerome Powell was not the only publicly important individual to appear before a hearing in D.C. on Wednesday. Both Dr. Anthony Fauci, head of the National Institute of Allergy and Infectious Diseases and Dr. Stephen Hahn, commissioner of the FDA, spoke before the Senate Health Committee, and neither sounded exactly as markets might have preferred when it comes to the timing of vaccine distribution.

Fauci indicated that he thought it likely that from among the four vaccine candidates now in late-stage clinical trials, we should have information regarding both safety and efficacy by "November or December." Really not bad news, but we all know that the president was hoping for late October. Those four candidates, by the way, are the experimental messenger RNA vaccines that appear to be the closest being developed by Pfizer (PFE) , and Moderna (MRNA) , as well as the currently paused (in the U.S.) trial that AstraZeneca (AZN) had been working on as well as the newest addition to Phase 3, Johnson & Johnson (JNJ) .

Stephen Hahn told the committee that the FDA was working to make clear just what they expect to see prior to one of the above companies actually submitting an application for Emergency Use Authorization. The Financial Times is reporting that these coming guidelines will in all likelihood include a need for participants to be monitored for at least two months after final dosage. This, if true, probably also pushes out the timing on a first tranche of priority dosage across the nation.

Keep an eye on Twitter (TWTR) the day after the upgrade from Pivotal Research. Back-to-back strong performances put that stock back on trend. I did not catch this one.

One that I did catch would be Fiverr (FVRR) , an e-commerce platform for enabling a marketplace for digital services. FVRR closed at the bottom of the range on Wednesday. Still a new closing high. If not already in, this may be one for the watch list. Until tech heats up again.

(Costco, Apple, and Johnson & Johnson are holdings in Jim Cramer's Action Alerts PLUS member club. Want to be alerted before Jim Cramer buys or sells these stocks? Learn more now.)

Get an email alert each time I write an article for Real Money. Click the "+Follow" next to my byline to this article.
TAGS: Federal Reserve | Indexes | Investing | Politics | Stocks | Technical Analysis | Trading | U.S. Equity