For his "Executive Decision" segment of Mad Money Thursday night, Jim Cramer sat down with Michael Neidorff, president and CEO of Centene Corp. (CNC) , a stock that's fallen 17.4% this year.

Neidorff said Centene just posted their ninth "clean" quarter in a row, with strong earnings and the ability to buy back stock and retire debt to strengthen their balance sheet.

When asked about the Affordable Care Act, Neidorff said the legal wrangling remains an overhang for his industry, but he's confident the courts will uphold the law.

Turning to proposed single-payer health care systems, Neidorff said they could cost as much as $25 trillion over 10 years, which simply makes them unsustainable.

Let's check the charts to see if a rally can be sustainable.

The daily On-Balance-Volume (OBV) line shows a decline into early October but the decline does not seem to be as severe as the price decline suggesting that while sellers have been more aggressive they are not totally abandoning the stock.

The 12-day price momentum study in the lower panel shows a low in August and a higher low in early October even though prices made a lower low. This difference in movement between the price of the stock and the indicator is a bullish divergence and tells us that the pace of the decline slowed. Why would the decline slow? Because someone has increased the pace of buying.

In the weekly bar chart of CNC, below, we can see some significant improvement in the chart and the indicators we favor. Prices are still in a downtrend and below the declining 40-week moving average line.

The weekly OBV line now shows strength from early September, which is a bullish shift in direction. Buyers of CNC have become more aggressive.

The trend-following Moving Average Convergence Divergence (MACD) oscillator has crossed to the upside from below the zero line generating a cover shorts buy signal. All in all these are positive signs.

In this weekly Point and Figure chart of CNC, below, we can see that prices are still in a downtrend but an upside price target of $64 is being projected. 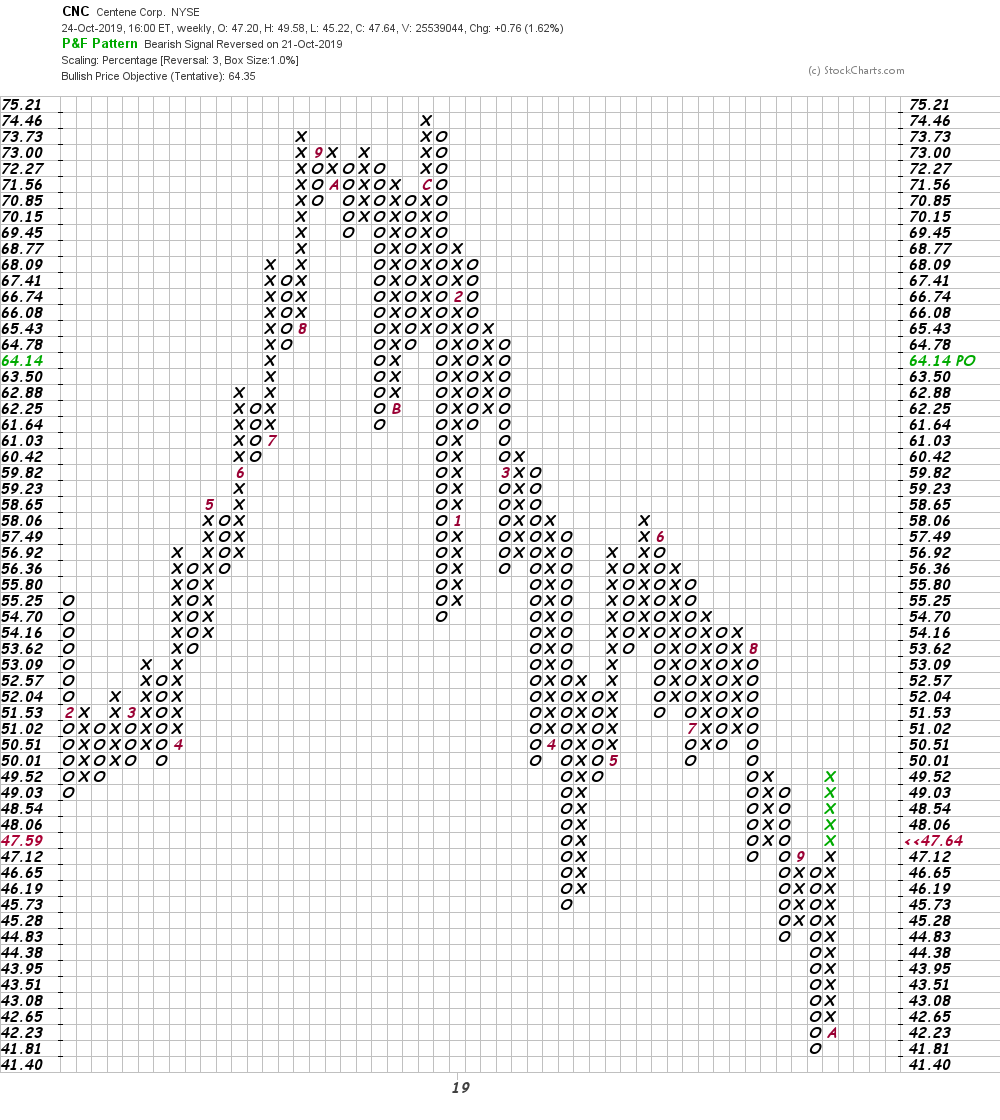 Bottom-line strategy: It is early in the game but aggressive traders could go long CNC on a dip back to around $45 risking a close below $40.

Get an email alert each time I write an article for Real Money. Click the "+Follow" next to my byline to this article.
TAGS: Investing | Stocks | Technical Analysis | Healthcare | Mad Money | Executive Interview