For his second "Executive Decision" segment of Mad Money Tuesday evening, Jim Cramer spoke with Michael Neidorff, chairman, president and CEO of health plan provider Centene (CNC) , which announced a $275 million charitable donation to its foundation, which will support medical research and give away $15 million a year.

Neidorff said medical research is important, which is why Centene is working with the Mayo Clinic to help develop diagnostic tests for pancreatic cancer, so patients can be diagnosed sooner and have better outcomes.

When asked about the fate of the Affordable Care Act, Neidorff said that Centene stays nimble so they can adapt to tomorrow. He said Centene has great health plans and welcomes competition.

Let's check if the charts are competitive.

The On-Balance-Volume (OBV) line has been stalled since April and has not shown upside leadership. Sometimes the OBV line can lead prices and break out on the upside before price. Not in this example.

The Moving Average Convergence Divergence (MACD) oscillator crossed above the zero line earlier this month for a buy signal but has quickly narrowed and is poised to cross to the downside.

In the weekly bar chart of CNC, below, we can see that prices are testing the flat 40-week moving average line. The weekly OBV line shows a decline into September and a slight rise into October telling us that sellers have largely dominated.
The weekly MACD oscillator has been weakening since February and diverged bearishly from the price action in May. We can see a sell signal in September and then a minor bounce.

In this daily Point and Figure chart of CNC, below, we can see a potential downside price target in the $54 area. 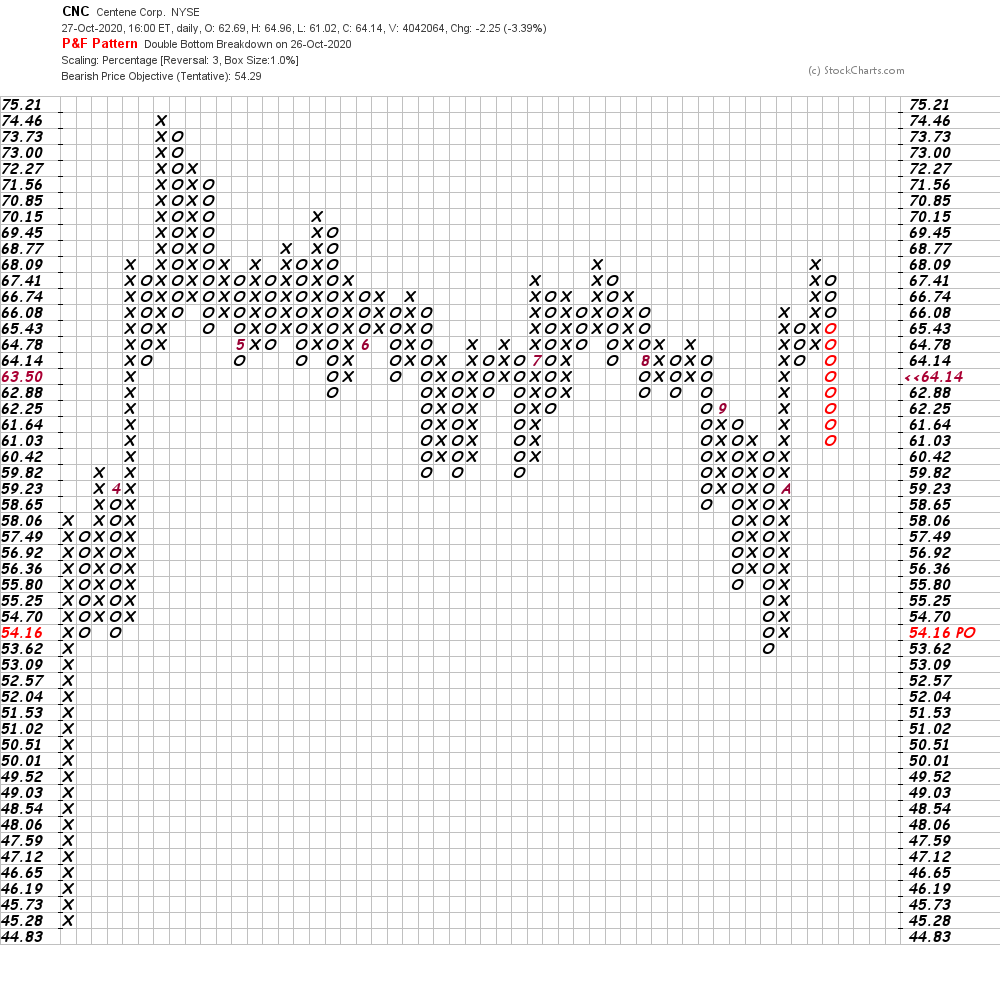 Bottom-line strategy: Stand aside on CNC as its charts suggest weakness in the weeks ahead.
Get an email alert each time I write an article for Real Money. Click the "+Follow" next to my byline to this article.
TAGS: Investing | Stocks | Technical Analysis | Healthcare | Mad Money | Executive Interview