There's a lot of action happening in the amusement park stocks. Jim Cramer told viewers of his Monday night Mad Money program he is sticking with his previous recommendation to own shares of Cedar Fair (FUN) , even after the failed takeover offer from rival Six Flags Entertainment (SIX) .

When he last looked at the sector, Cramer declared Cedar Fair the superior operator, and since then the shares have continued to march steadily higher. The company recently reported over 1.1 million visits to its parks so far this year, with visits up a solid 6%. When Six Flags last reported however, results were mixed.

But with the privately held Great Wolf attracting investor interest, Cramer said he wasn't surprised that Six Flags made a bid for Cedar Fair. The only problem, the reported $70 a share isn't enough of a premium. Cramer estimated Six Flags would have to pony up $85 a share for Cedar Fair, something the already debt-laden Six Flags is unlikely to do.

Let's move away from the fundamental story and check out the charts and indicators of FUN.

In the daily bar chart of FUN, below, we can see a bullish setup. Prices began their rise in late June. The price action improved with higher highs and higher lows. The slope of the moving averages turned positive and the On-Balance-Volume (OBV) line signaled that buyers of FUN were more aggressive. A positive technical picture.

In September we saw the 50-day average line cross above the 200-day line for what is commonly called a golden cross. This bullish moving average crossover signal may not prove to be the best indicator when tested but it can be successful in trending markets.

The Moving Average Convergence Divergence (MACD) moved above the zero line in late June and it is still in a bullish configuration but it is narrowing toward a possible take profits sell signal.

The weekly bar chart of FUN, below, shows a nice turnaround pattern. Prices declined but rebased from June of 2018 to August of this year when they made their move to the upside. In September prices broke out to the upside.

The slope of the 40-week moving average line turned bullish in September telling us that the math was positive. The weekly OBV line began to improve in June and has made its own upside breakout confirming the price gains. The MACD oscillator on this longer time frame is bullish as it moves above the zero line.

In this Point and Figure chart of FUN, below, we can see that the software has counted the X's and O's and projected an upside price target of $76. 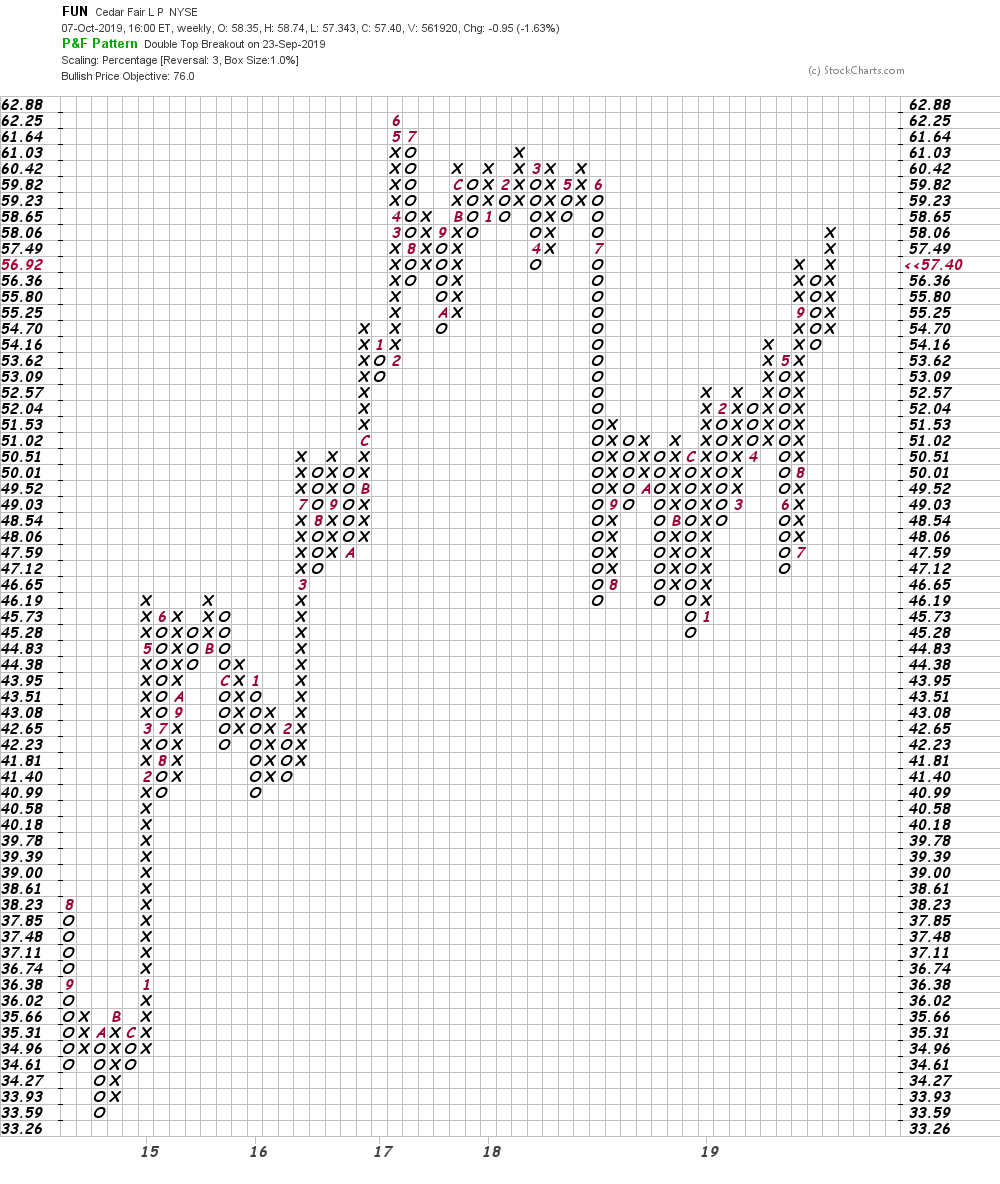 Bottom-line strategy: The overall picture of FUN is positive so aggressive traders could approach the long side around $56 with a sell stop below $53. The $75 area is a good target for the months ahead.

Get an email alert each time I write an article for Real Money. Click the "+Follow" next to my byline to this article.
TAGS: Investing | Stocks | Technical Analysis | Mad Money

In Trading, Information Is Costly, but Essential

The more knowledge a trader holds, the higher the probability of success. Let's use Vaxart as an example.

How Goldman Sachs Stock Shapes Up Into Wednesday's Earnings

A look at the charts and indicators of GS ahead of its quarterly report.