CBS Corp. (CBS) is the Stock of the Day at Real Money here on Tuesday after the media company released third-quarter results that beat the consensus on earnings but missed on revenue. Let's dive into the charts and indicators to see if the recent price low will be retested or could mark the beginning of a short-term markup phase.

In this daily bar chart of CBS, below, we can see that prices declined from July into early November. Prices have rallied to the underside of the declining 50-day moving average line but remain well below the bearish 200-day line. Trading volume has been heavy since August and the On-Balance-Volume (OBV) line has followed the same path as prices in their move lower. The OBV has turned up in recent days but has not been rising long enough to impress. The Moving Average Convergence Divergence (MACD) oscillator has crossed to the upside from below the zero line for a cover shorts buy signal.

In this weekly bar chart of CBS, below, we can see that the price of CBS has been cut in half the past three years. Prices are below the declining 40-week moving average line and the weekly OBV line has been in a three-year decline to tell us that sellers have dominated during the decline. The weekly MACD oscillator is well below the zero line but has begun to narrow toward a potential cover shorts buy signal.

In this Point and Figure chart of CBS, below, we can see that the X's and O's are projecting a $46 price target. 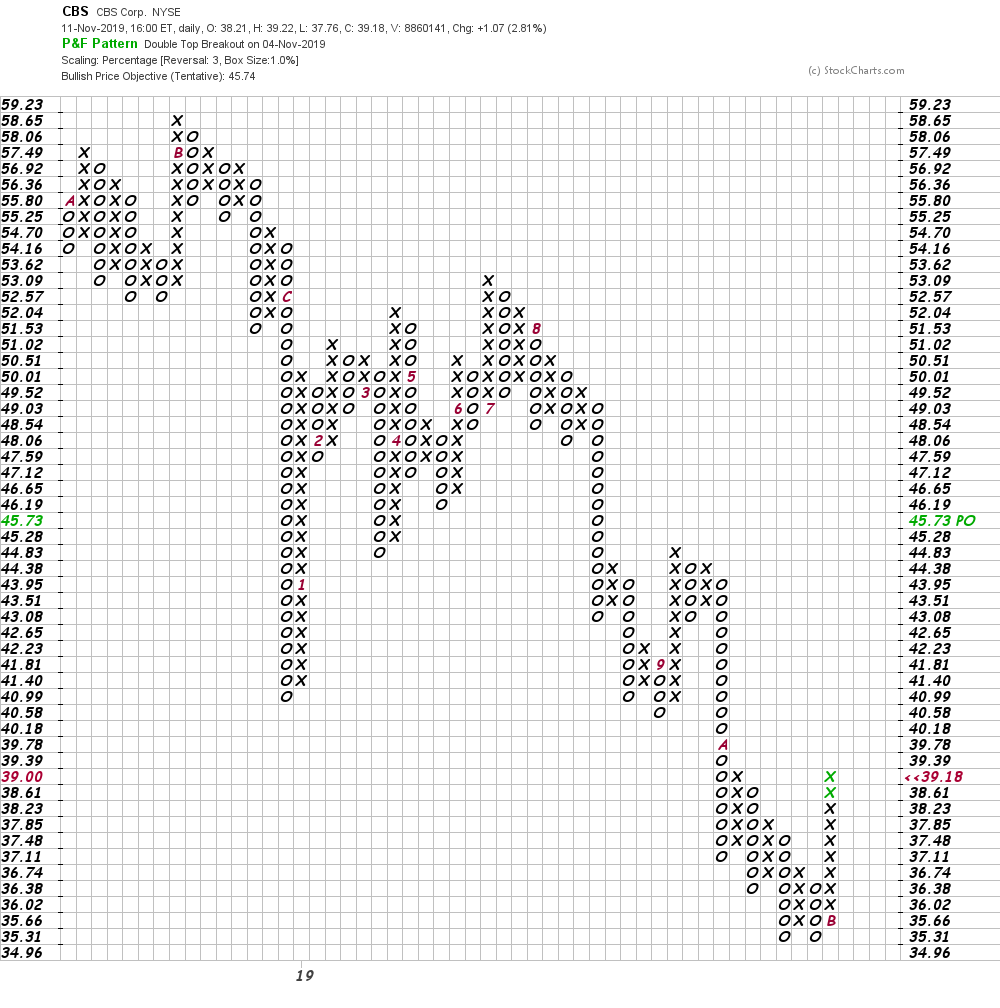 Bottom line strategy: Fundamental analysts are focused on the CBS and Viacom ( VIAB) merger, but I just look at the charts and right now if looks like the price of CBS can do a bit better. (Viacom is a holding of Jim Cramer's Action Alerts PLUS charitable trust.)
Get an email alert each time I write an article for Real Money. Click the "+Follow" next to my byline to this article.
TAGS: Mergers and Acquisitions | Earnings | Investing | Stocks | Technical Analysis | Book publishing | Digital Entertainment | Media | Movie Production | Movies | Television Production/Distribution | Stock of the Day