All of the major equity indices closed lower Friday with negative internals on lighter volume.

While all closed at or near their intraday lows, no technical events were generated on the charts, leaving all in near-term uptrends with the one exception of the Dow Jones Transports remaining neutral.

The bulk of the indices remain overbought on their respective stochastic levels although none have flashed "bearish crossover signals" at this juncture.

However, the VIX chart (see below) remains a real concern for us as it is still at levels preceding important market corrections twice over the past 12 months. In both cases, said corrections occurred rapidly, resulting in difficulty in adjusting portfolios in a timely fashion. 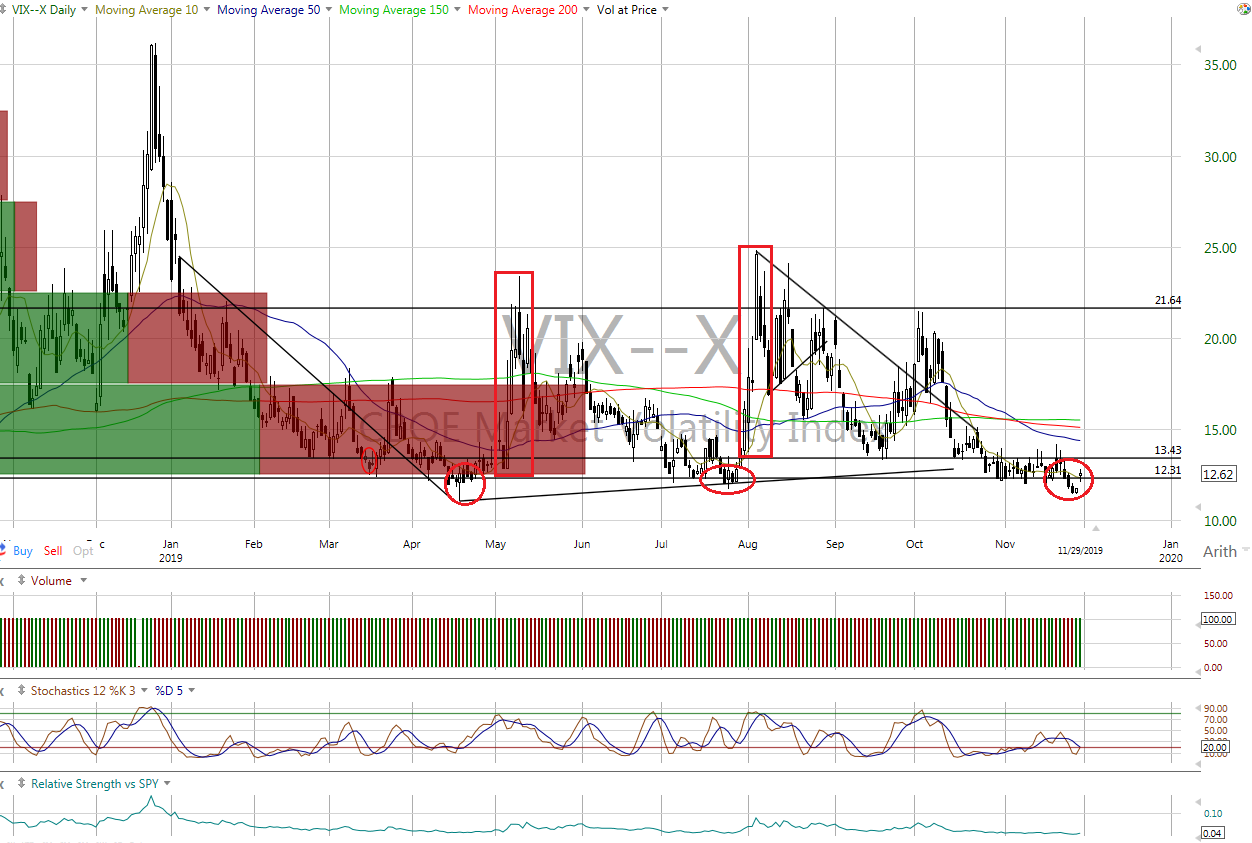 However, the Investor's Intelligence Bear/Bull Ratio (contrary indicator) remained bearish at 18.1/57.1, suggesting a continuation of excess bullish sentiment/complacency on the part of investment advisors.

In addition, the detrended Rydex Ratio (contrary indicator) is now bearish as well at +1.16 as the leveraged ETF traders have finally flipped to be heavily leveraged long. As such, the psychology scales have now tilted negative.

The percentage of S&P 500 stocks trading above their 50-day moving averages is a neutral 65.2% as is the Open Insider Buy/Sell Ratio at 42.1.

The S&P 500 continues to see a decline in forward earnings estimates to $171.51 per share via Bloomberg as the index has risen. This has resulted in the index now being slightly overvalued at an 18.3x forward P/E multiple while the "rule of twenty" finds fair value at 18.2x. The prior attractive undervaluation has been resolved.

While the charts have yet to send any cautionary signals, given the fact that investor psychology has become overly bullish, the S&P 500 is slightly overvalued and the VIX is at very cautionary levels, the potential for a sudden market correction that could take the crowd by surprise has increased. We do not view the risk/reward as all that attractive, thus we are maintaining our near-term "neutral/negative" outlook.

Get an email alert each time I write an article for Real Money. Click the "+Follow" next to my byline to this article.
TAGS: Indexes | Investing | Markets | Stocks | Technical Analysis | VIX | U.S. Equity

Speaker Pelosi and Secretary Mnuchin appear to be playing nice for the moment. Can we keep the consumer in the game?

The Banks Are Getting Socked Hard, but This One Has a Fighting Chance

People's United Financial posted excellent results in both 2018 and 2019 and looks like a bargain now; here's how I'd play it.

Kass: One Man Gathers What Another Man Spills

Too often we debate markets with the same source of dogma and lack of objectivity that exists in our political debates.