Garcia said many consumers are familiar with Carvana's car vending machines but are less familiar with its purchases of used cars. He said Carvana is very active in buying and refurbishing cars for resale. Garcia also said Carvana is poised to take a much bigger share of the 40 million used cars that are sold every year in the U.S.

Let's check out the charts of Carvana, which earned a mention from Cramer in his March 30 column on stocks he likes during the great reopening of the economy.

In this daily bar chart of CVNA, below, we can see that prices have been rolling over the past four months. Prices were bouncing off the rising 50-day moving average line in December and January, but now we see that prices are trading below the declining 50-day line and rallies to the underside of the average have failed. Trading volume has been neutral/flat for months, but the On-Balance-Volume (OBV) line shows a rise from November. A rising OBV line tells us that buyers have been more aggressive than sellers, but still the stock has weakened. If we have been seeing more buying, these entrants to the long side may well be hurt if support is broken. The Moving Average Convergence Divergence (MACD) oscillator has weakened since late December and is now below the zero line in sell territory.

In this weekly Japanese candlestick chart of CVNA, below, we see a mixed picture. Prices are trading above the rising 40-week moving average line, but the line looks like it could be tested soon. There are several lower shadows in the $260-$240 area, telling me that traders are rejecting the lows and thus suggesting that $240 is strong support. On the other hand, if $240 is broken it could mean a deeper decline. Unlike the daily OBV line the weekly one shows a decline the past two months. The MACD oscillator has crossed to the downside for a take profit sell signal.

In this daily Point and Figure chart of CVNA, below, we can see a possible downside price target in the $229 area. This would mean that the support around $240 is broken. 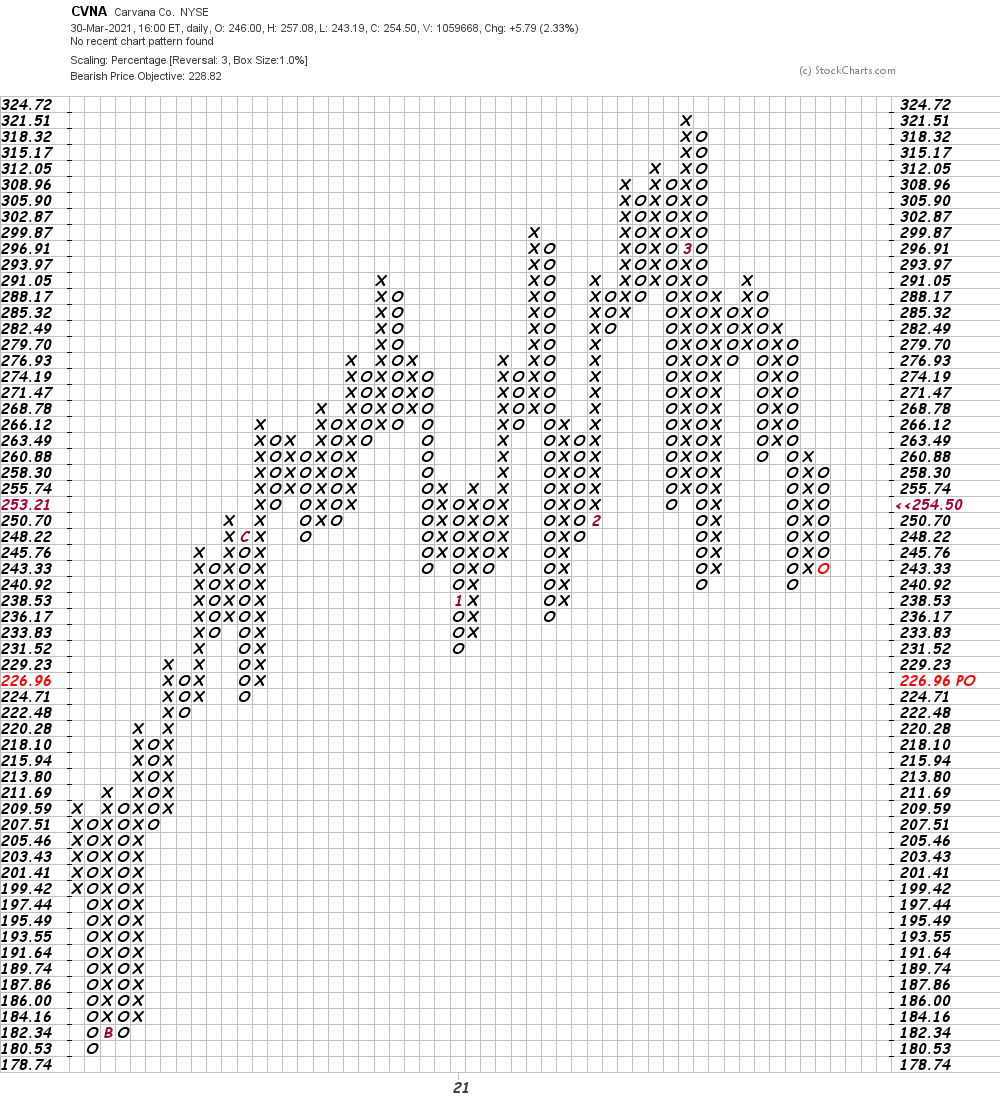 In this weekly close-only Point and Figure chart of CVNA, below, we used a traditional even-dollar scaling instead of percentage changes. This chart shows a downside price target in the $225 area. Not too bearish.

Bottom line strategy: The charts and indicators of CVNA suggest that in the short run we could see further price weakness to the $230-$225 area. I would defer purchases of CVNA for now and let's see how things play out.

Get an email alert each time I write an article for Real Money. Click the "+Follow" next to my byline to this article.
TAGS: Investing | Stocks | Technical Analysis | Automotive | E-Commerce | Mad Money | Executive Interview | Real Money